In August 2019 we were sitting in a Georgian restaurant in Kyiv.  If that sounds odd, it isn’t.  Georgian cuisine is delicious. And thanks to the internal migration which occurred within the USSR in the last half of the 20th century, some of the best Georgian restaurants in the world outside Georgia are in Kyiv.  At least they were until the current Russian war.

A huge television in the restaurant showed footage of a rotating statue.  A man and a woman circling each other and then merging.  It looked amazing.  Julie asked the waiter, “Where is that?”  He looked at her like she was a simpleton and said “Georgia”.

Of course it was.  And instantly a place we thought we’d like to visit one day got elevated to a ‘must go’ next time we were in Europe. We’ve had ‘Georgia, sweet Georgia’ on our minds ever since.

That statue is in Batumi, a resort town on the Black Sea.  Locals and, until recently, Russians flock there every summer to enjoy its subtropical climate and laze in the sun.

There’s an old part of town which looks more middle European than trans-Caucasian. 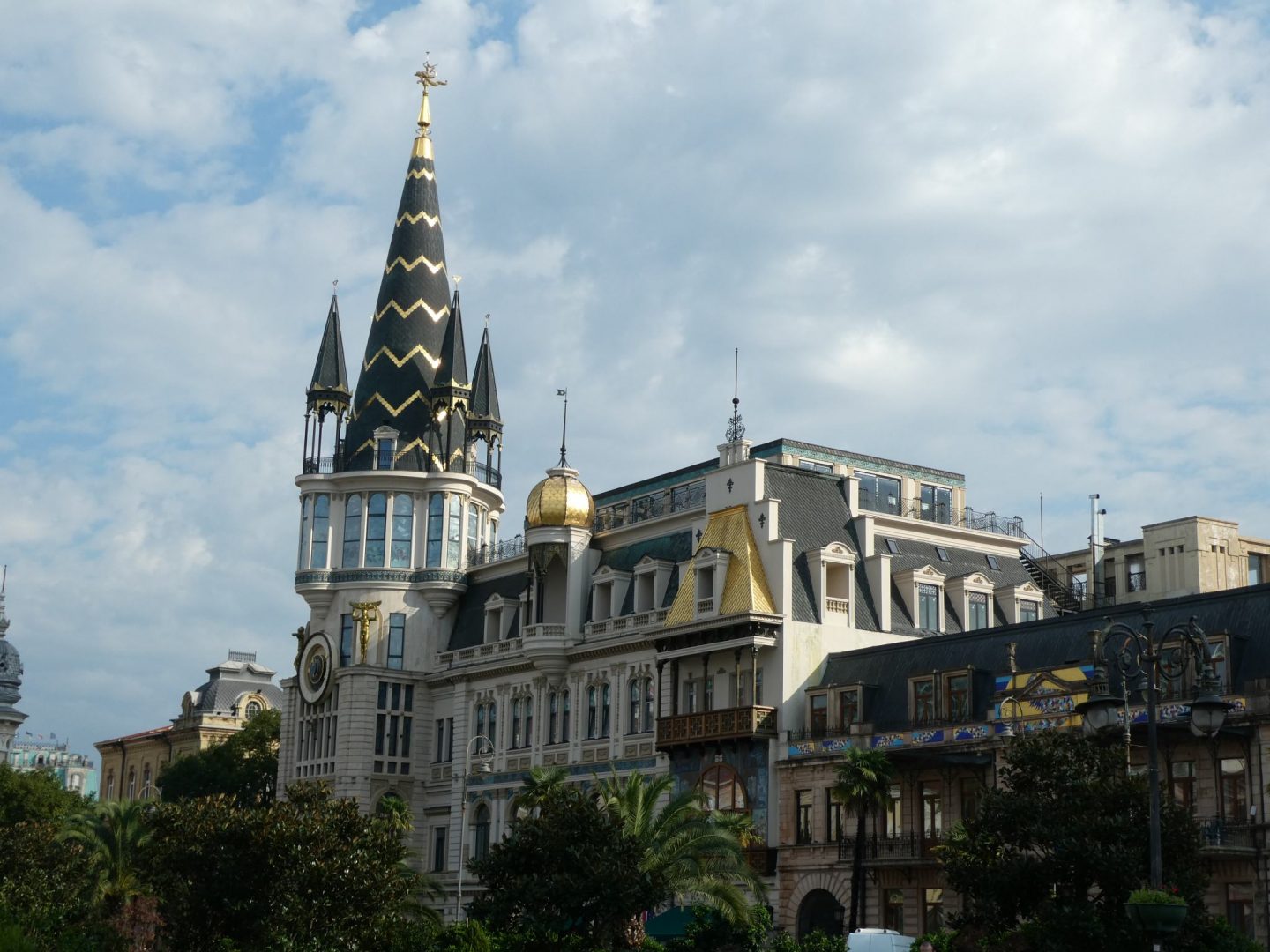 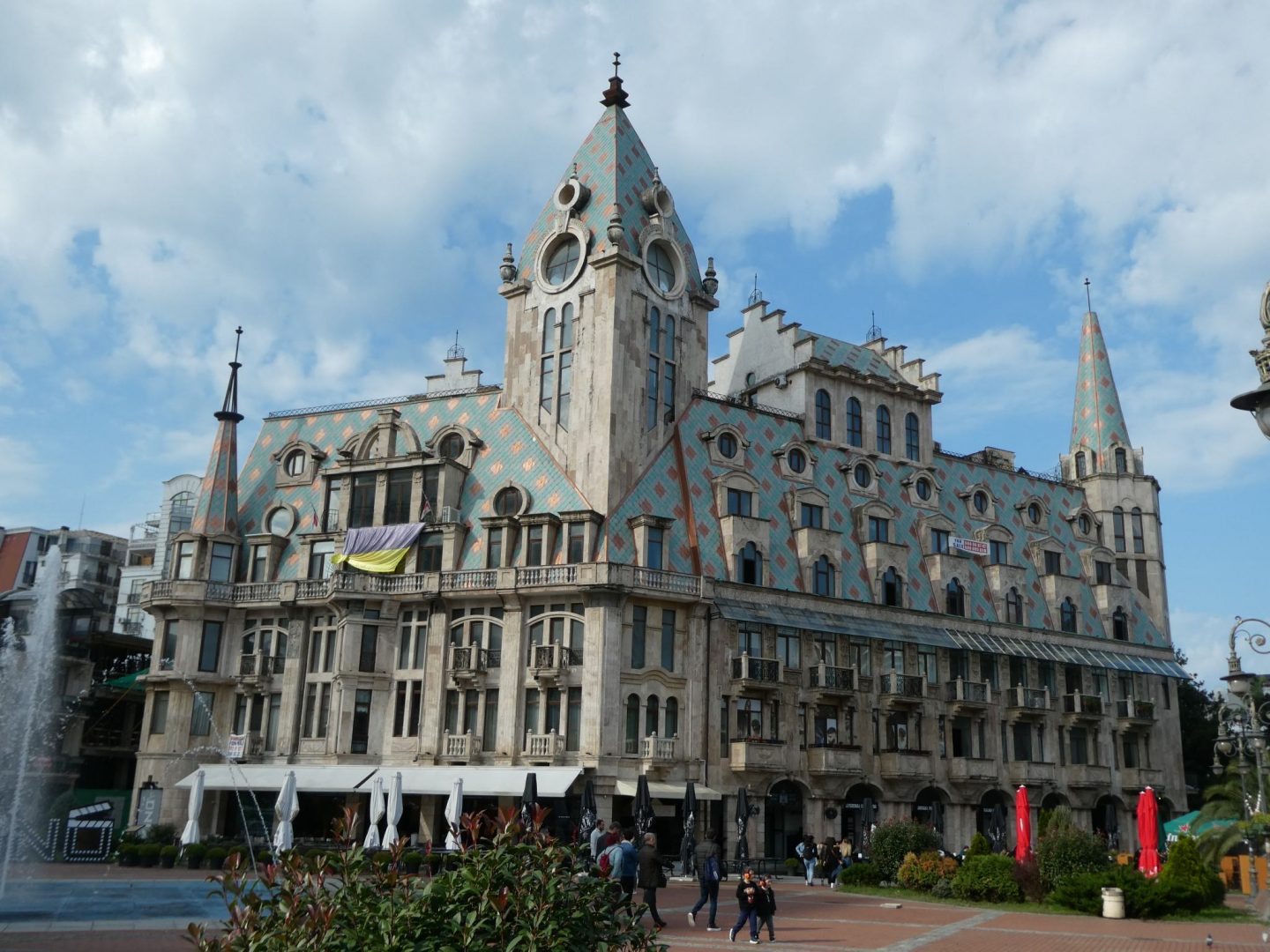 In the central square is a statue of Princess Medea holding the Golden Fleece.  According to Greek mythology, Jason and the Argonauts travelled to the mysterious eastern land of Colchis – here on the shores of the Black Sea in eastern Georgia – in search of the fabled fleece.

The king set Jason seemingly impossible tasks in exchange for the fleece but his daughter Medea fell in love with Jason and used sorcery to assist him achieve them.  Love knows no bounds and having secured the fleece, Medea killed her own brother to distract her father so she and Jason could flee.  Back in Greece, they married and had four sons.

Of course, being a Greek tragedy, all did not go smoothly.  After ten years, Jason abandoned Medea for Creusa, the daughter of another king.  In the true tradition of mythic women scorned, Medea then murdered Creusa.  But rather than getting Jason back, things got worse.  She ended up also murdering her and Jason’s sons and fleeing to Athens.

She never returned to her homeland, and despite being guilty of fratricide, homicide and filicide, here she is in Batumi holding the Golden Fleece high for all to see. 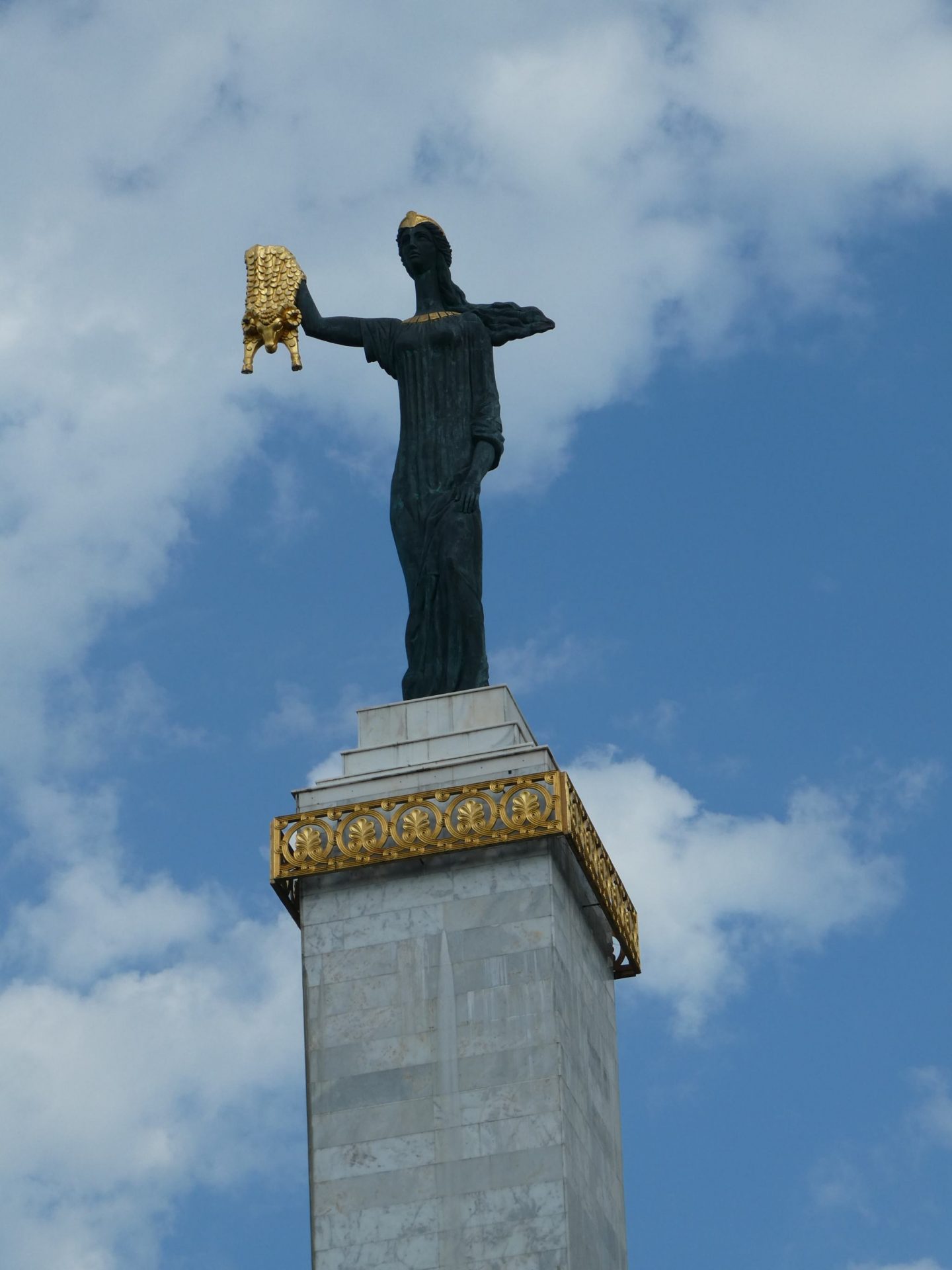 In this one, Russia attempts to stomp on Ukraine but the jack boot is in for a surprise. 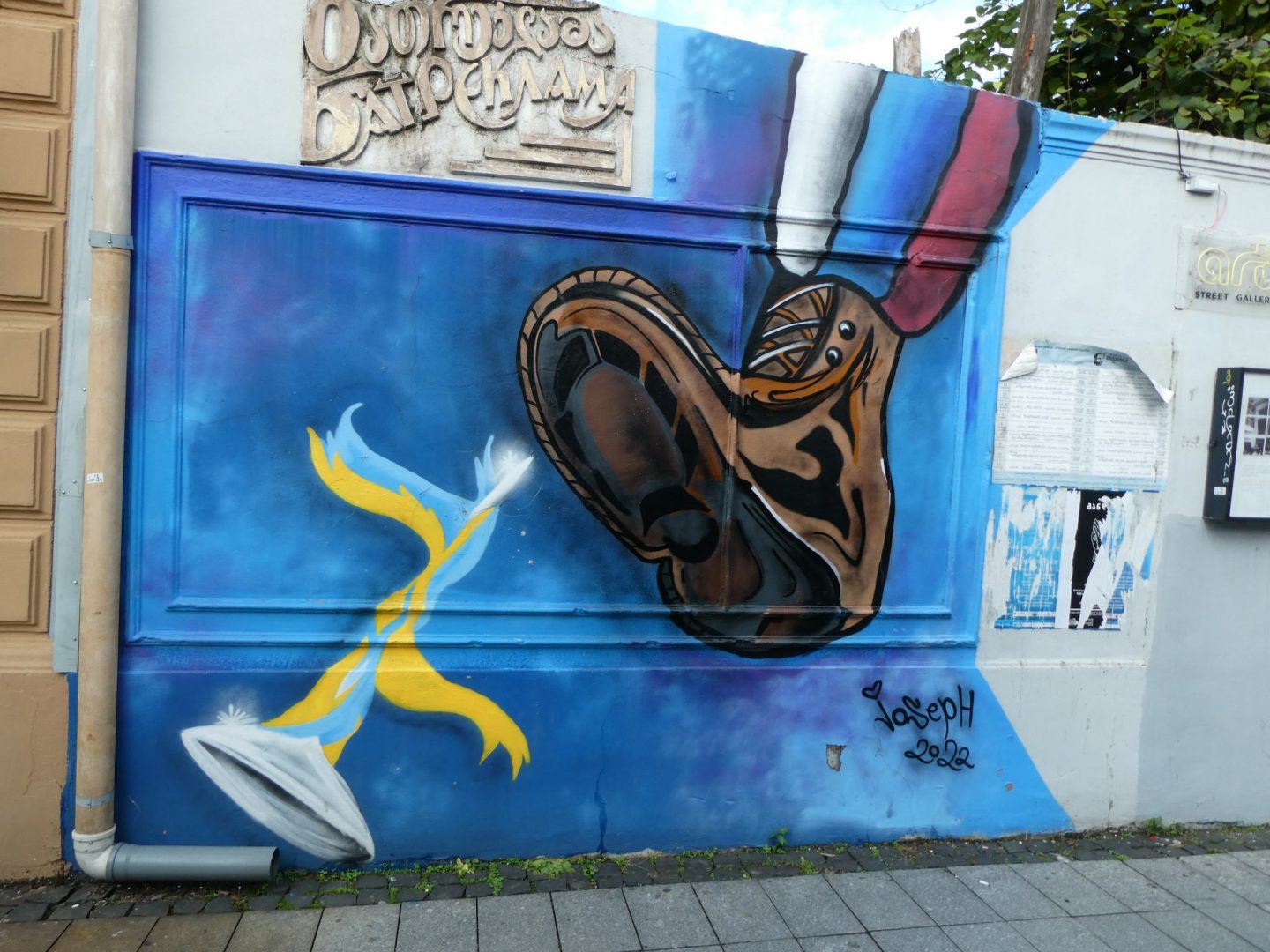 And this very local true story.  A few years ago, a stray dog showed up one day on a busy street corner in central Batumi.  He started striding into the traffic to make cars stop for school children using the crossing.  A YouTube video of him went viral and now he’s a local celebrity.

The council named him Kupata, which is Georgian for ‘sausage’ and built him a dog house on the corner.  And a street artist painted this mural of him. 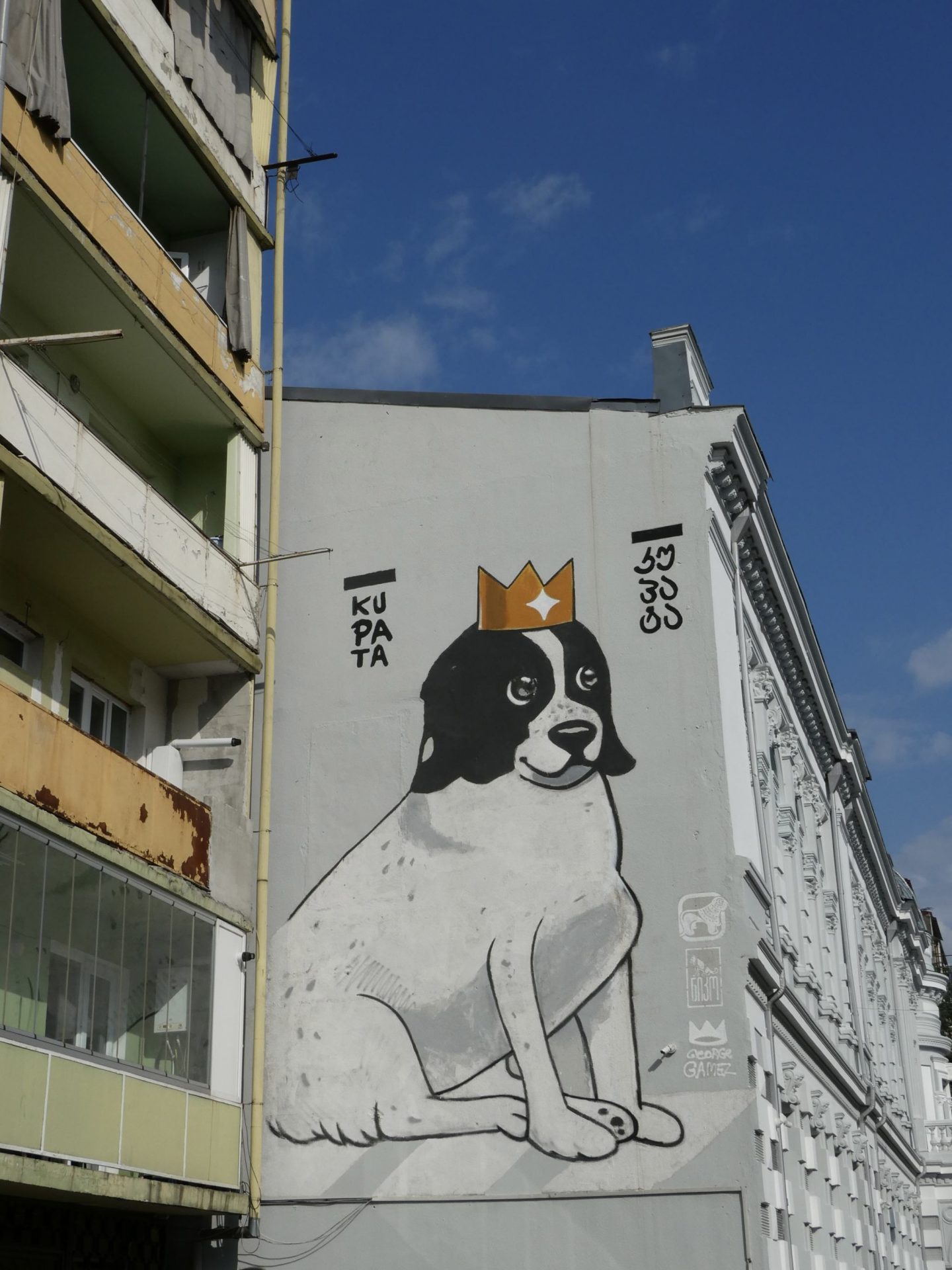 Interspersed with the old town buildings are some ulta-modern developments. 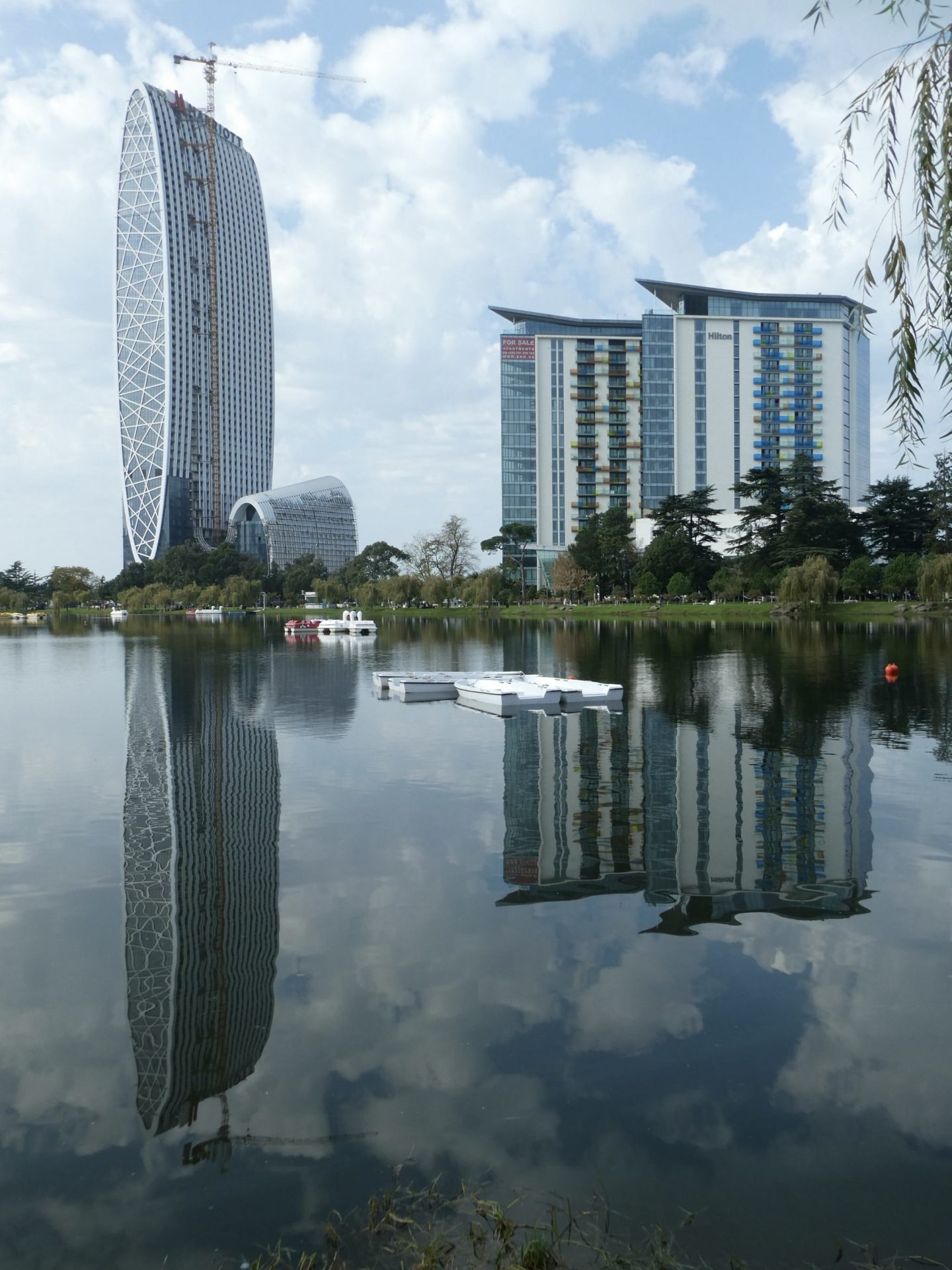 Some of them seem quite pointless.  Like this hotel with a non-operating Ferris wheel on the side. 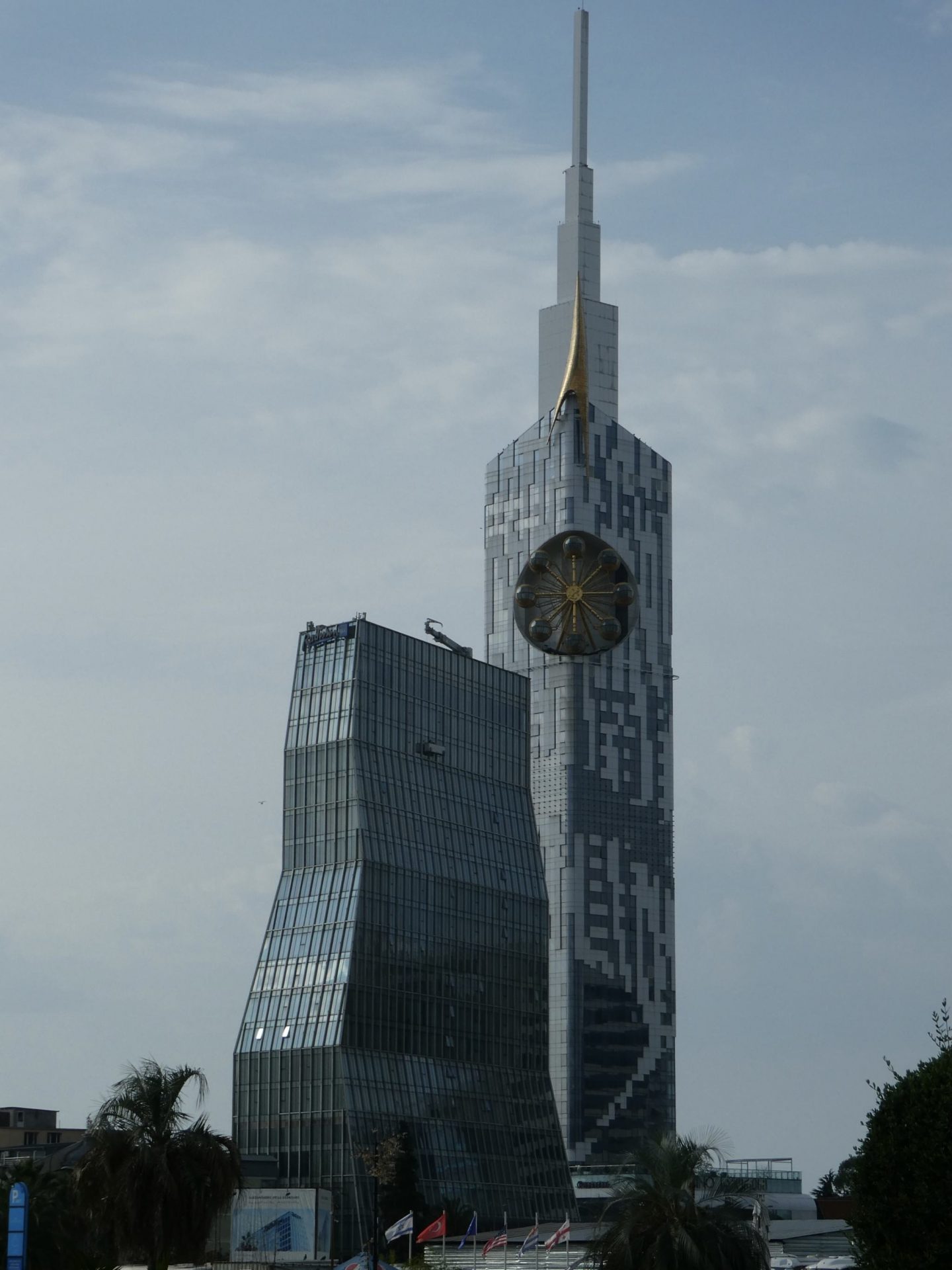 The Alphabet Tower was constructed in 2011 as a celebration of the uniqueness of the Georgian alphabet. In other words, it’s a nationalistic symbol.  It was built with a revolving restaurant, viewing platform and TV studio on different levels.  But following completion, it was never really opened.  Several years later it was leased to a Spanish company which is operating the restaurant.

At 130 metres in height, it’s visible from just about anywhere on the waterfront. 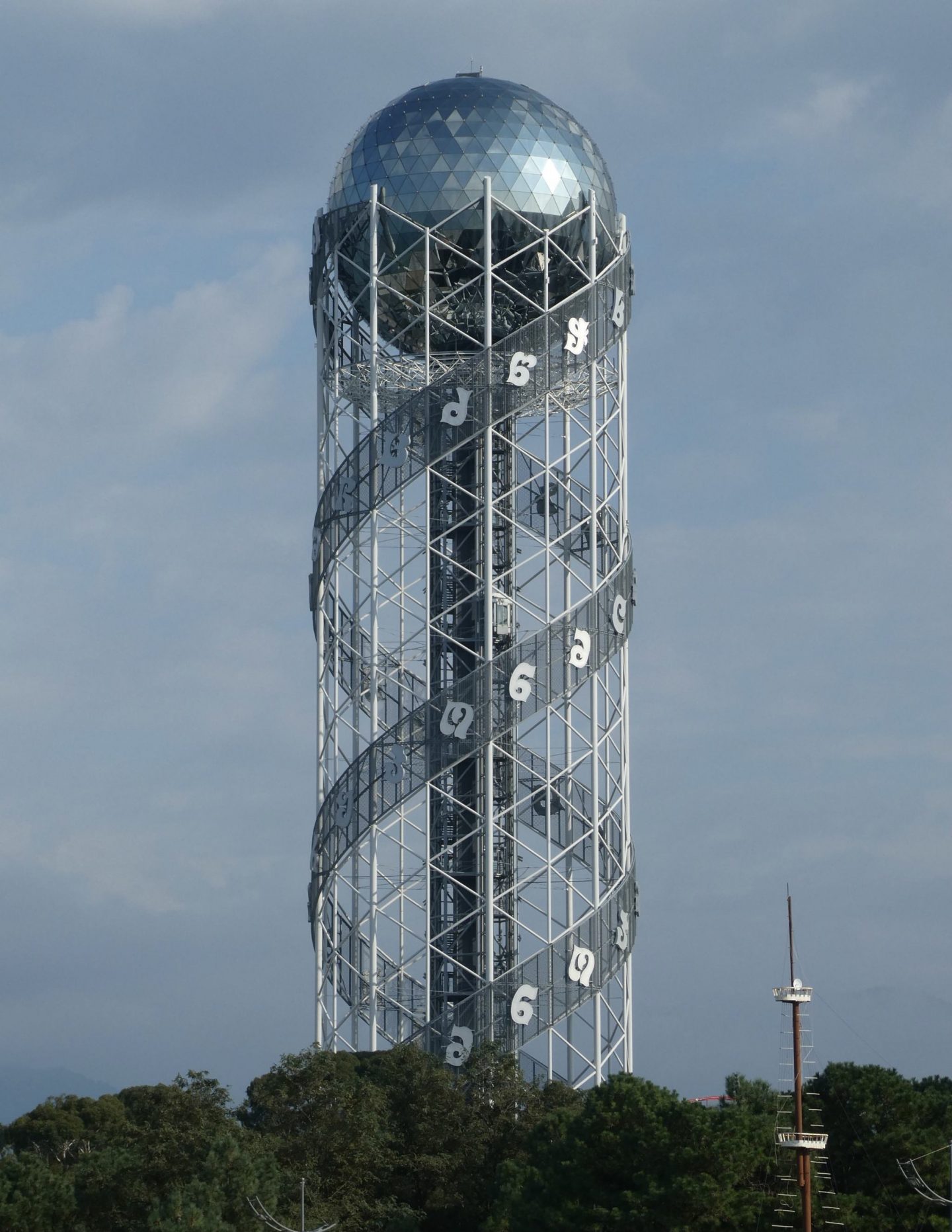 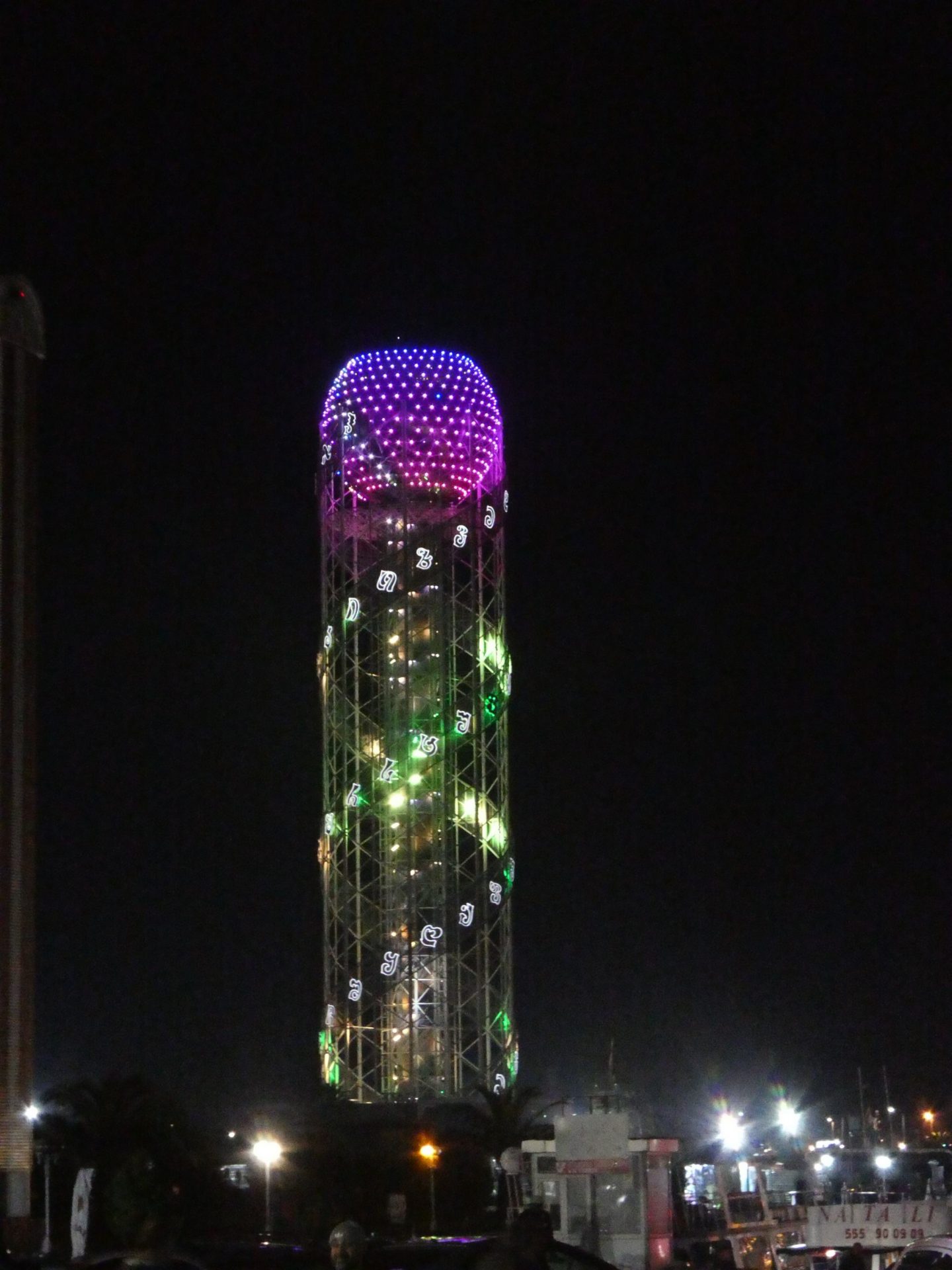 The waterfront is pleasant enough for a stroll along the promenade. 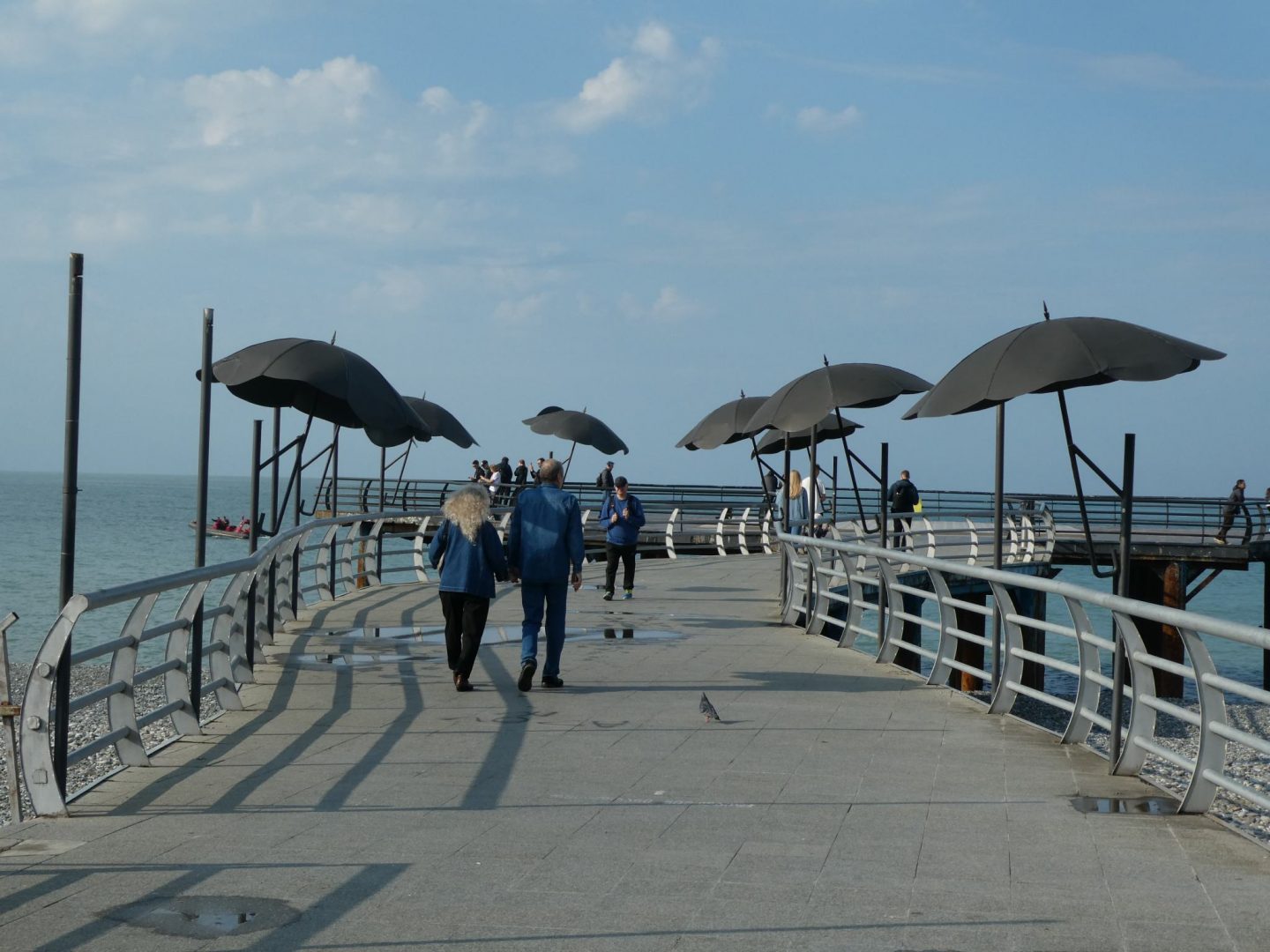 But we weren’t here to promenade.  We were here to see that statue.  Man and Woman, aka Ali and Nino.

This eight metre high kinetic statue of a man and woman constructed from stacked aluminium segments is the creation of Georgian artist, Tamara Kvesitadze. 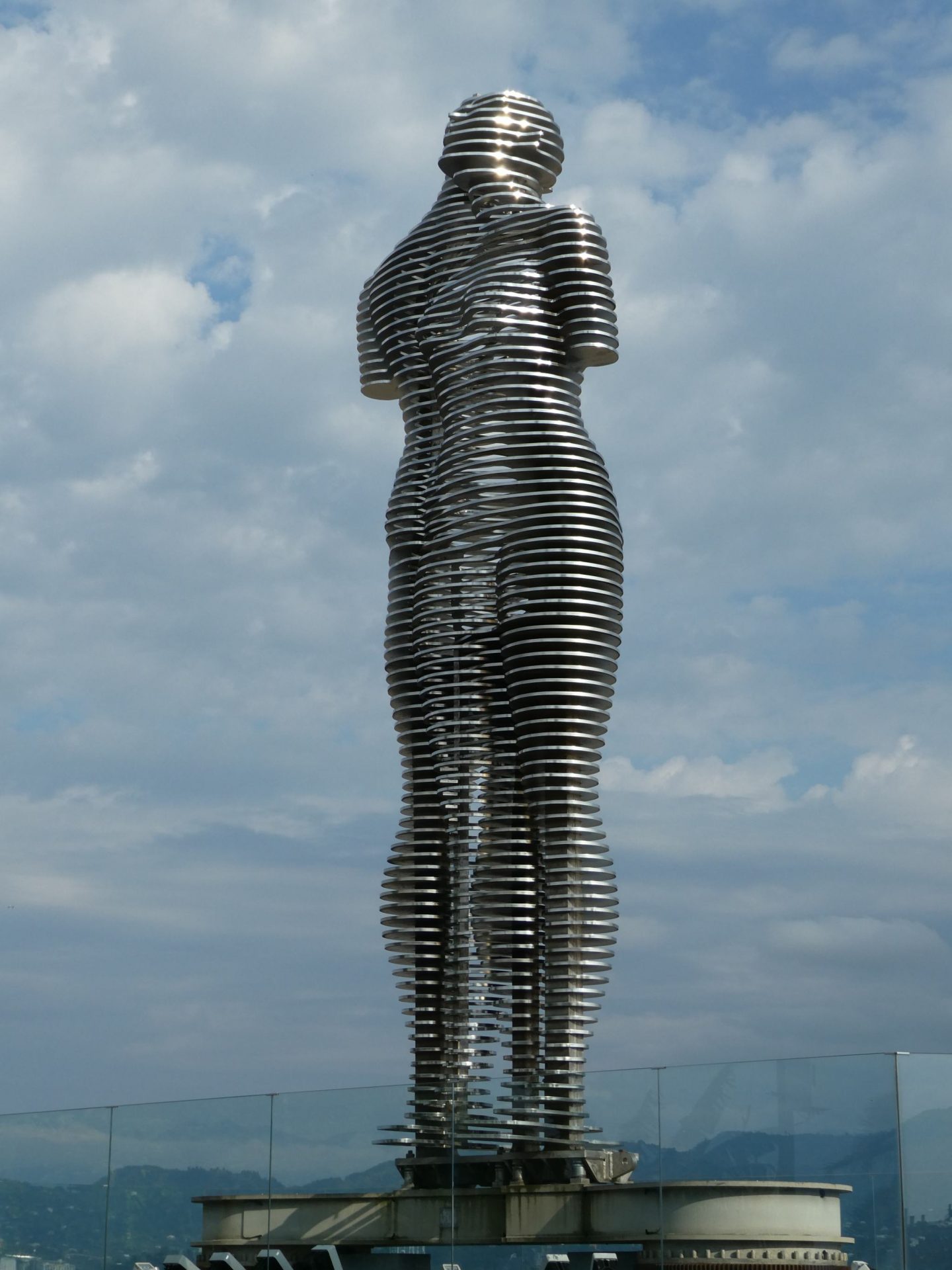 Her inspiration was the romance between the lead characters in the novel, Ali and Nino.

Written in 1937 by a writer using the nom-de-plume Kurban Said, the novel tells the story of an Azerbaijani Muslim from a wealthy family in Baku who falls in love with a Georgian princess from a Christian family.  Set in Azerbaijan, Tbilisi and Tehran in the time of the Russian revolution it’s a beautifully written tale interweaving nationalism and cultural difference into a love story.  It’s not religion or Shakespearean family feuds which complicate life for these ‘star-crossed lovers’, it’s history and politics.  It’s a literary classic in the region and considered the national novel of Azerbaijan.

Each night, the statues engage in an elegant movement. They are initially seperate.  They circle each other, coming progressively closer until they merge into one, before disengaging again.   A metaphor for love and union found and lost.  The sequence takes about ten minutes and is lit with changing colours. 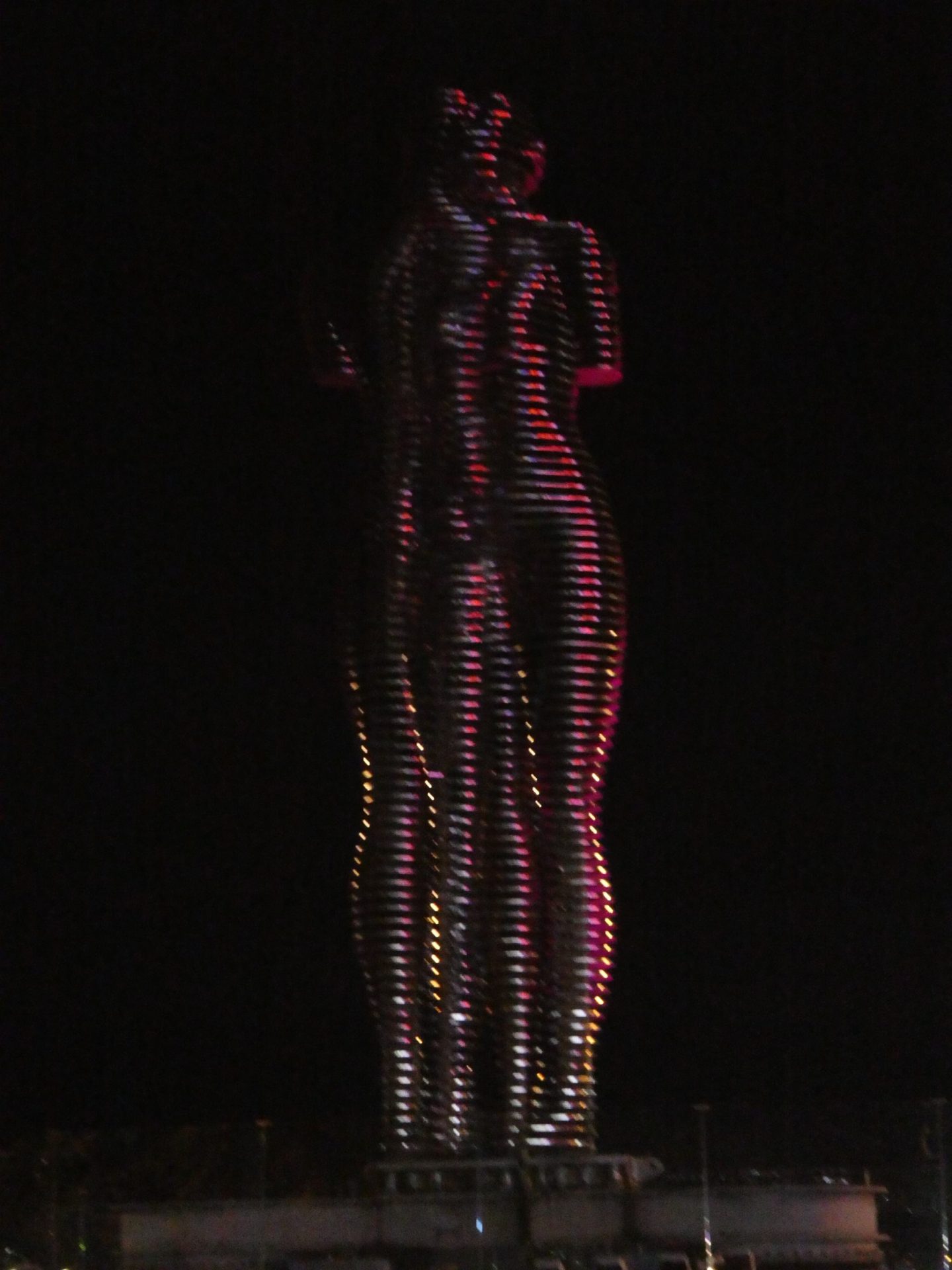 Sadly, frustratingly, the lights were on but the statues weren’t turning due to ‘technical difficulties’.  We couldn’t get any information about when they would be back up and running.  In any case, we were leaving next day for Azerbaijan.  Disappointing, but hey, that’s the vagaries of travel.  At least we saw them.