Described by the Lonely Planet as ‘Azerbaijan’s loveliest town’, Sheki is in the hills up near the Russian border, about six hours drive from Baku.  It’s a quiet place where we enjoyed a few days seeing the contrast between cosmopolitan Baku and the rural life which most of the rest of the country has.

Sheki is indeed pretty – in a ‘rustic, old stone’ kind of way. 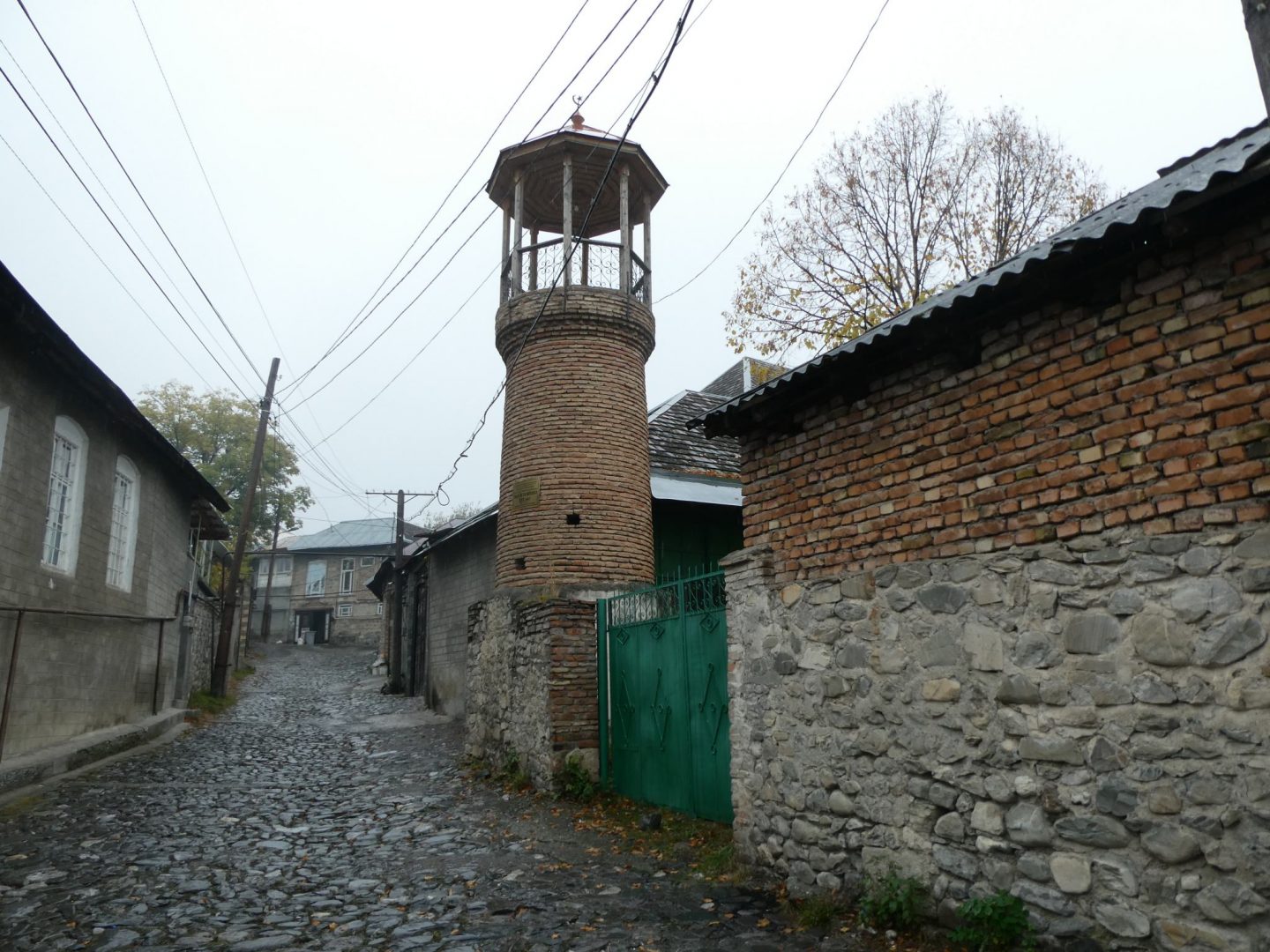 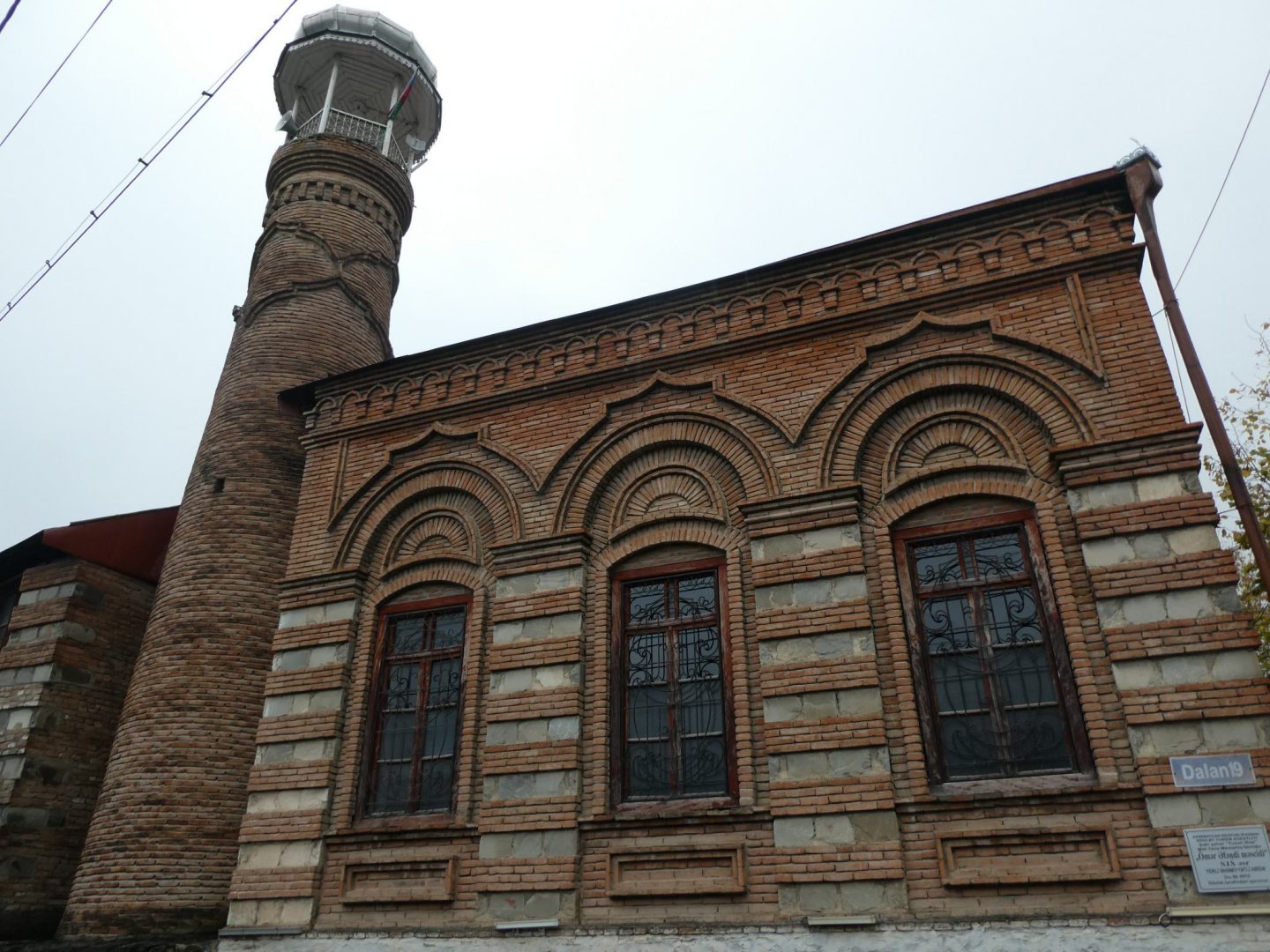 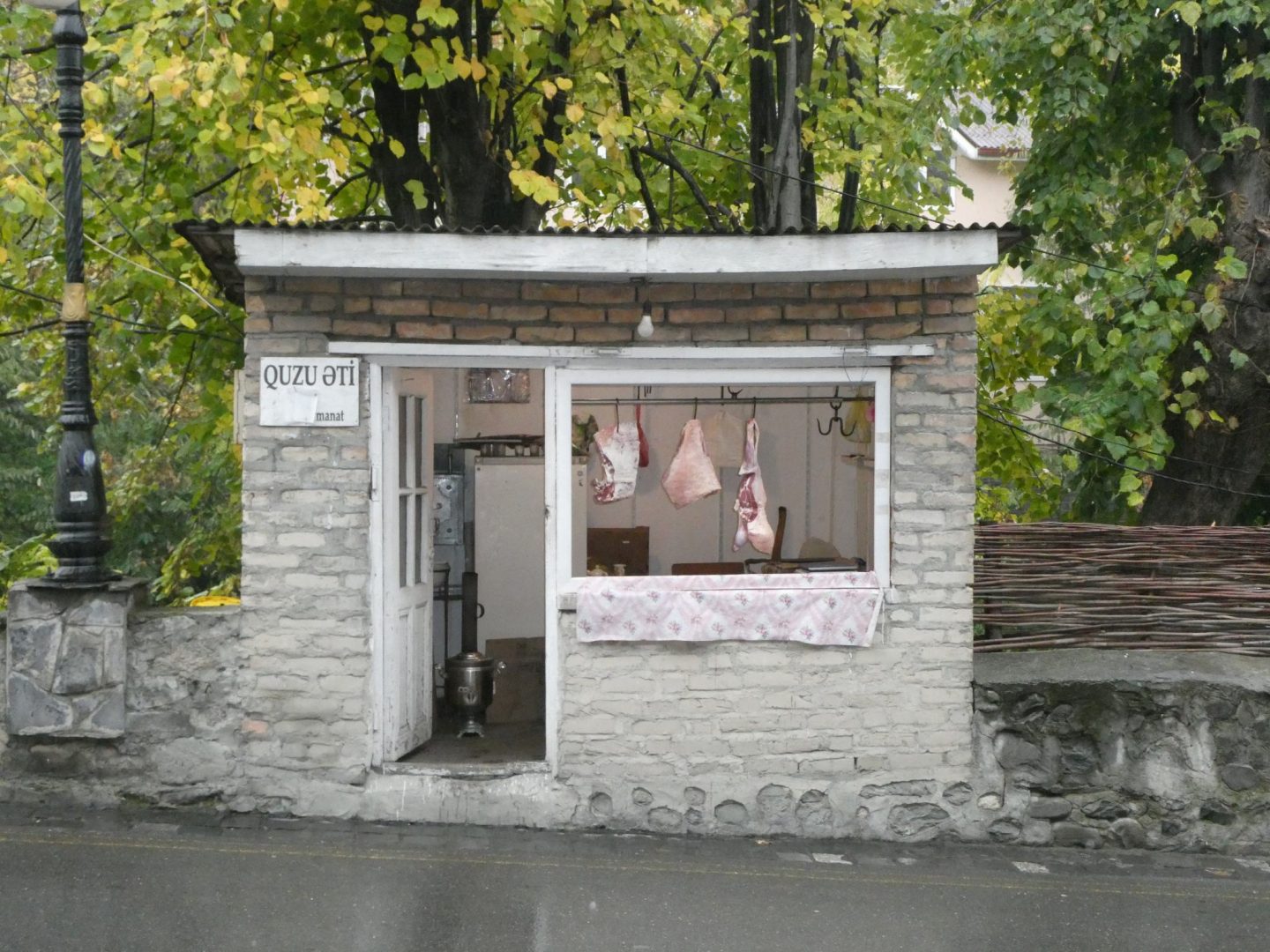 From the Middle Ages it was an important junction on the Silk Road trading routes through the Caucasus Mountains, connecting Central Asia with what is now Turkey, Georgia, the Black Sea and, ultimately, Western Europe.  At its height it had five major caravanserais.  One remains largely intact, now refurbished into a modern hotel. 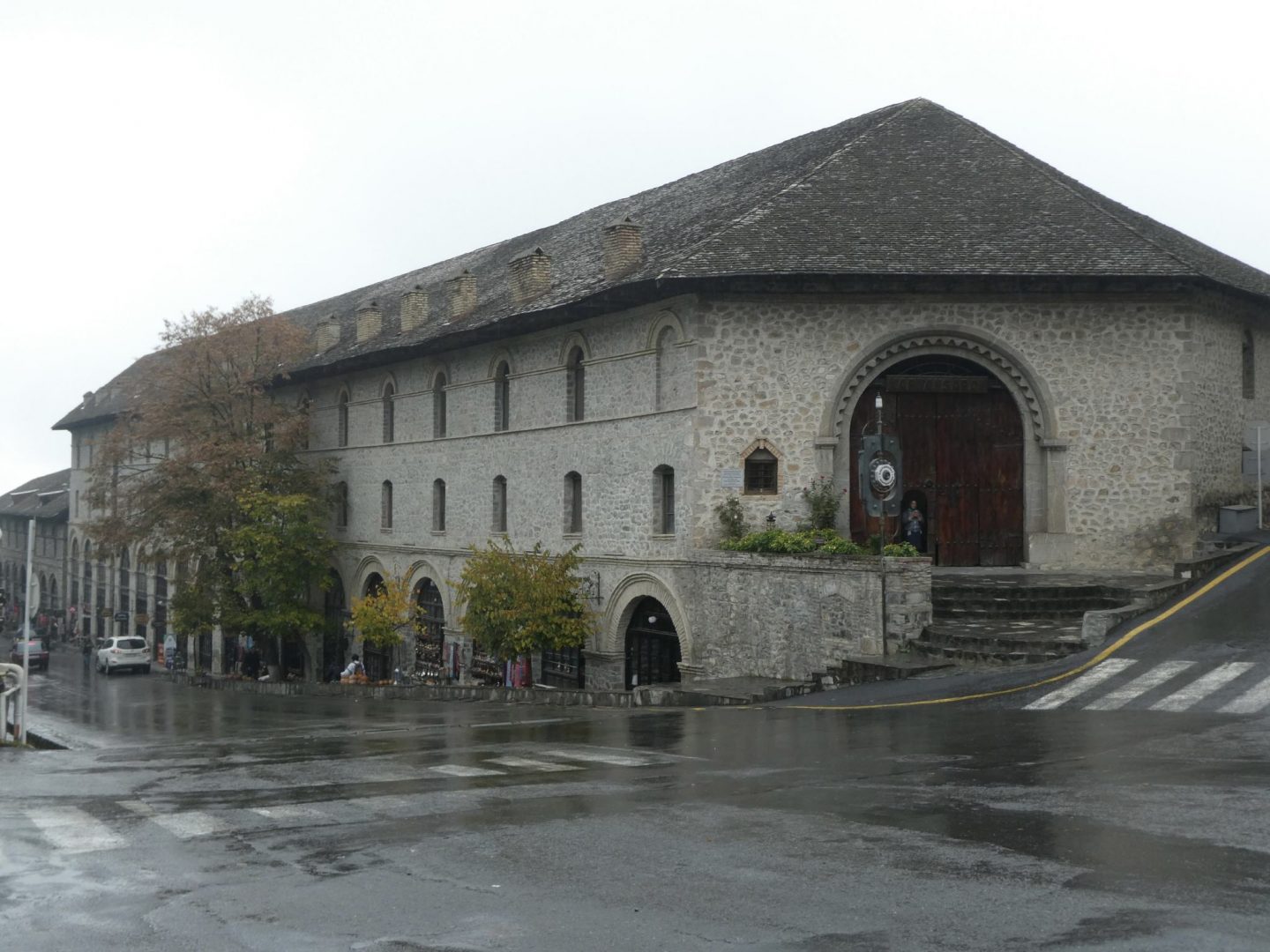 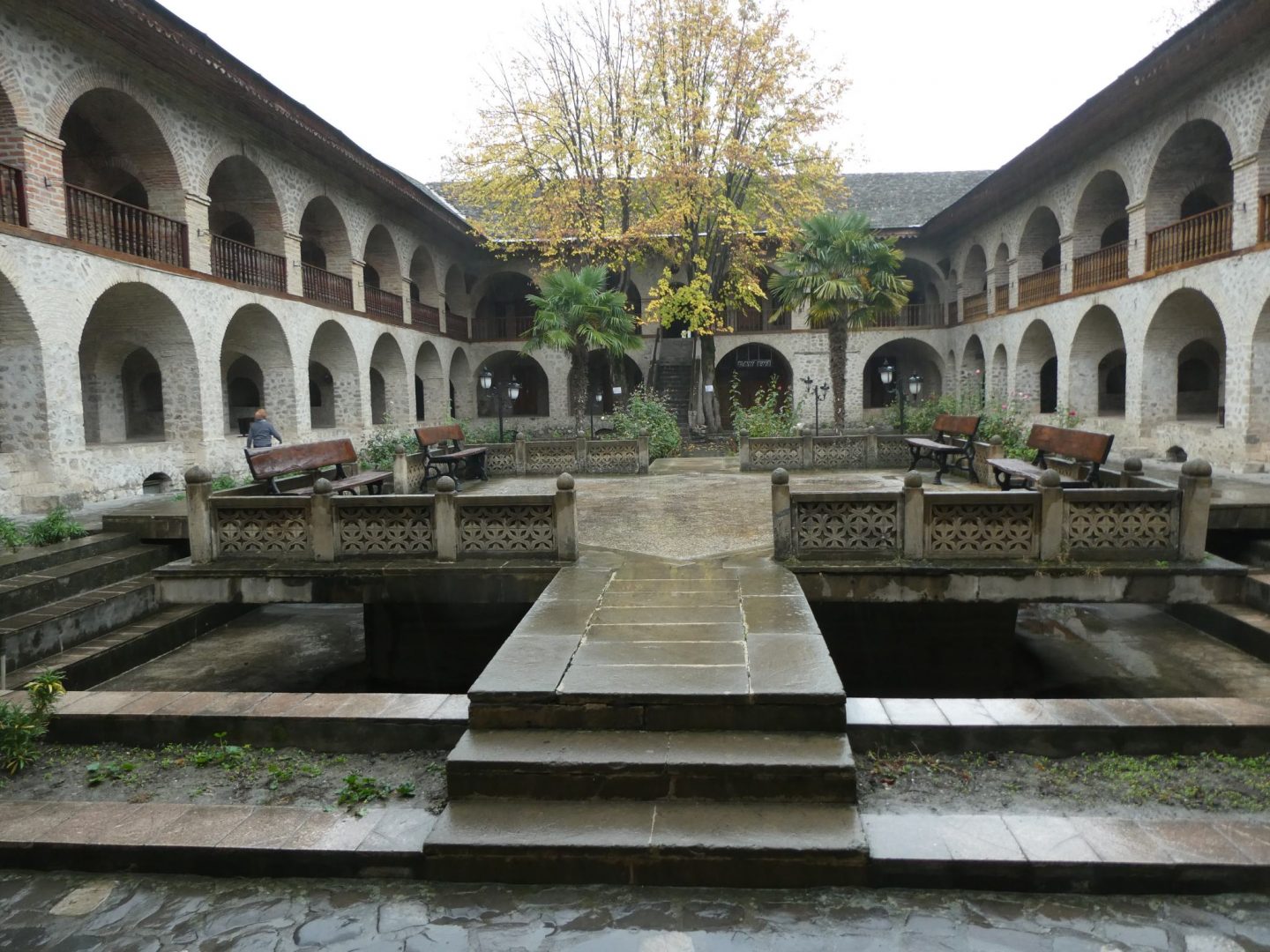 As well as trade, Sheki derived great wealth in the 17th and 18th centuries from silk worm breeding, trading in silk cocoons and silk weaving.  Mohamed Hasan Khan built his Xan Sarayi (Khan’s Palace) here in 1762.  It included more than 40 buildings within a walled fortress.  Only a few remain, including the palace which served as both a private residence for the khans and a place for them to conduct public administration. 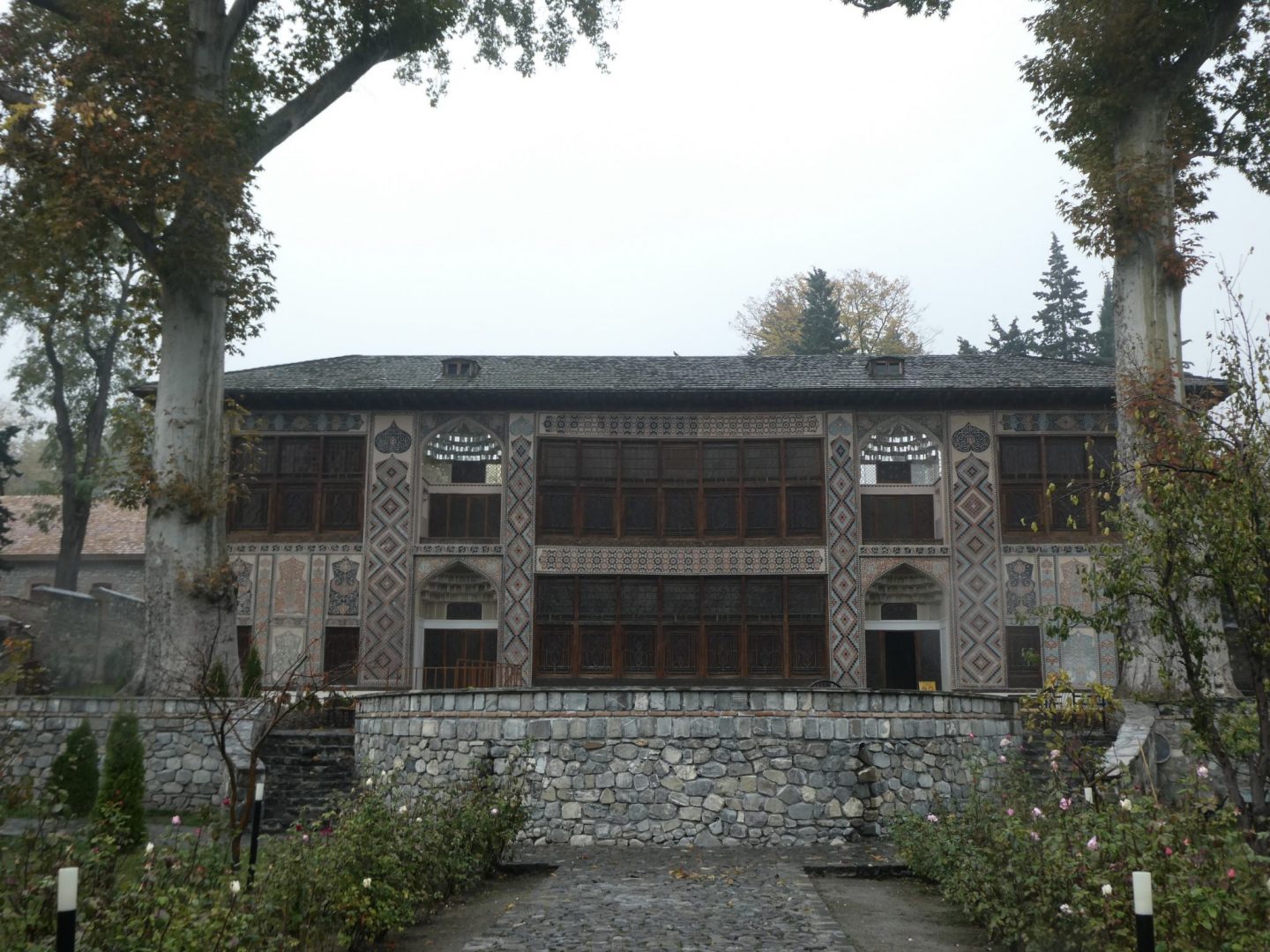 It doesn’t look that ornate from the outside, but the inside is spectacular.  The walls are completely covered with intricate murals of birds, vases of flowers and hunting scenes.   The windows are a lattice made using a technique called sebeke.  Hundreds of small pieces of hand carved timber are slotted together around coloured glass.  Incredibly, no glue, nails or other fastening are used.  The result is a set of stunning stained glass windows.

Unfortunately no photos are allowed.  But there’s a workshop on the palace grounds with some examples. 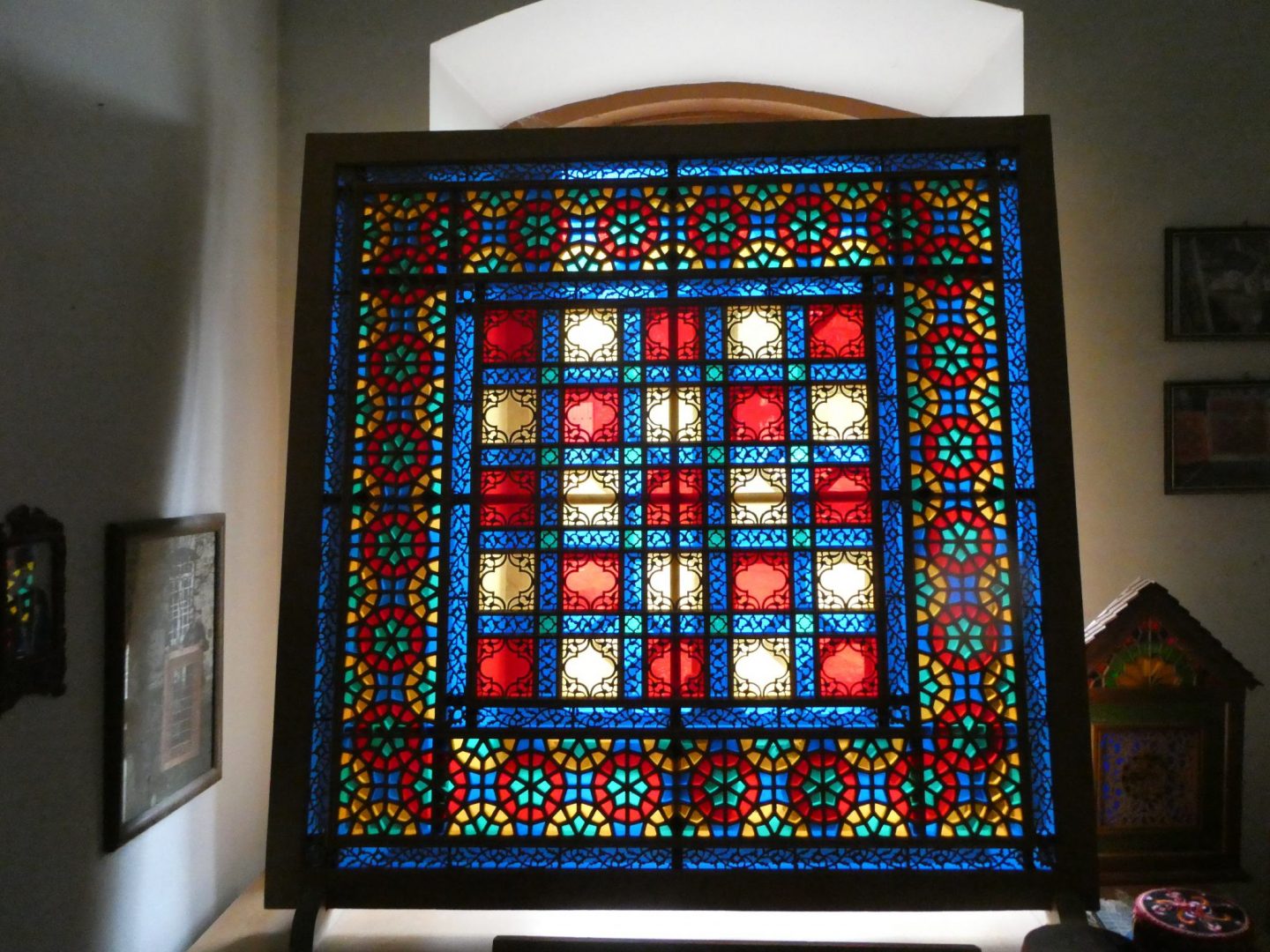 It’s almost a lost art but young apprentices are being taught the old techniques.  The workshop is managed by a lovely fellow whose family have been sebeke craftsmen for generations.  The photo on the wall behind him is his father receiving an award for his work on restoration at the palace.  He explained to us all about how it was done.  The precision required is truly amazing. 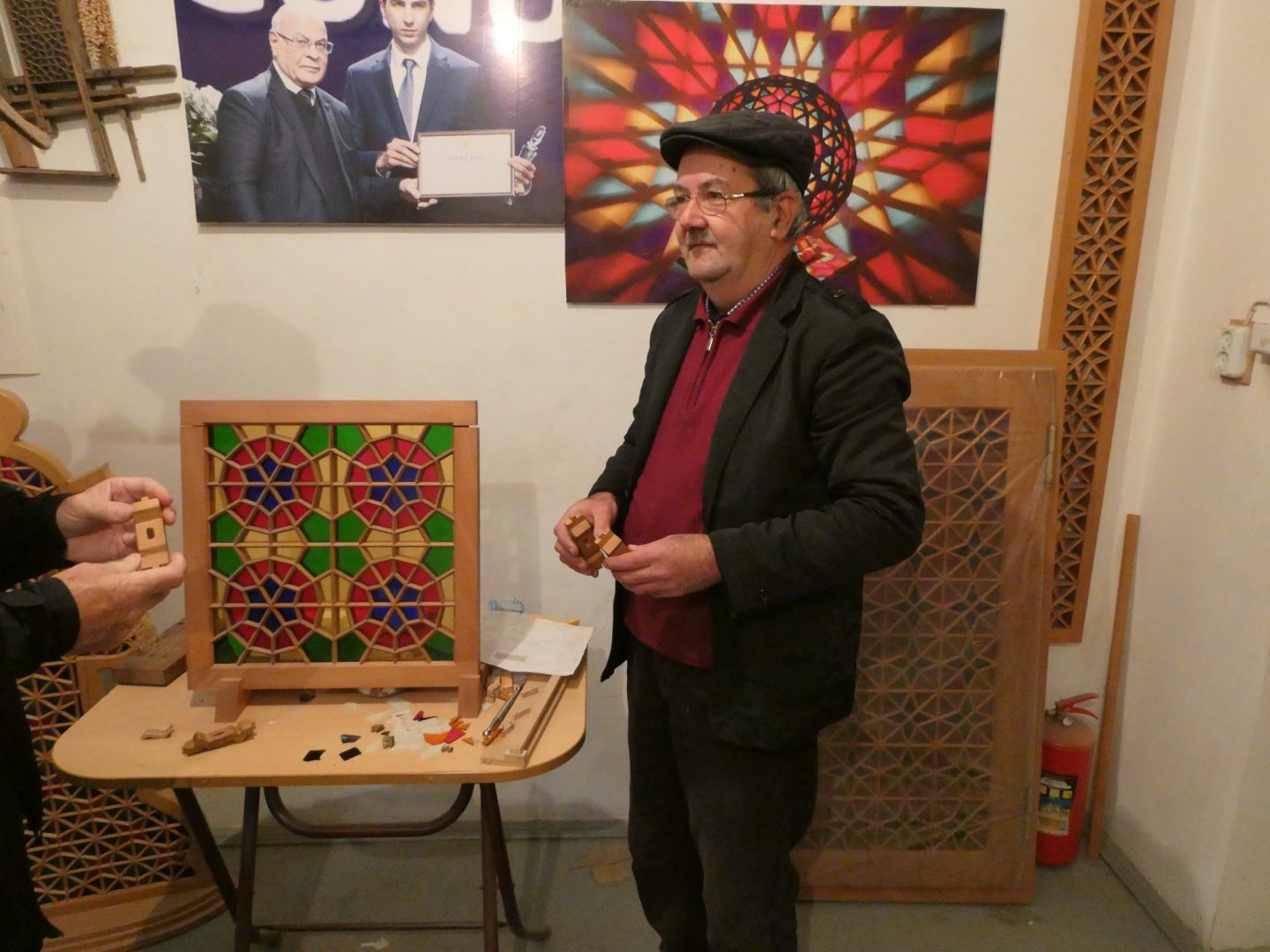 Outside the walls, a bit closer to the centre of town, is the Khan’s Winter Palace. 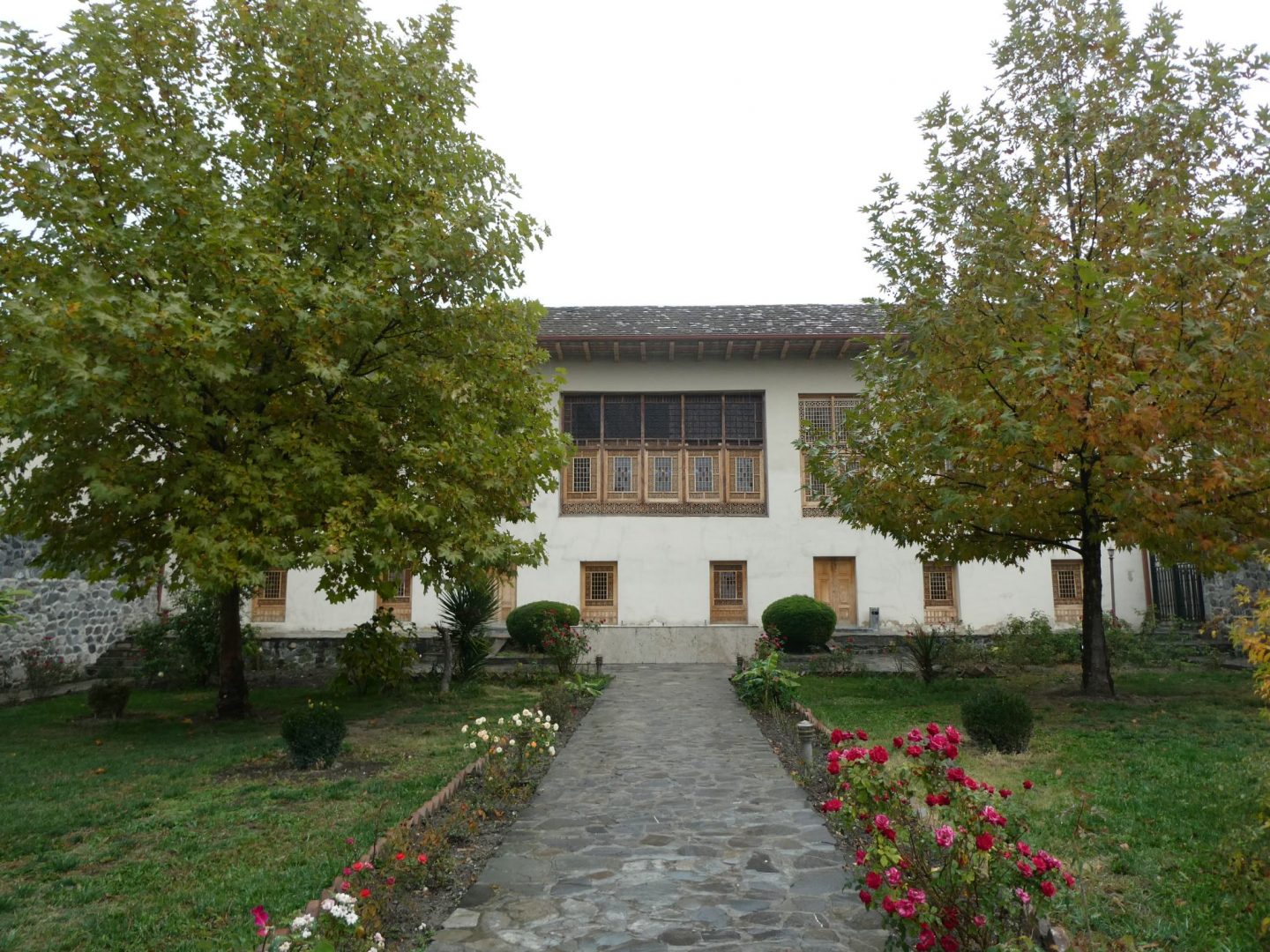 It also has some amazing frescoes and beautiful shebeke latticework but again photographs are not allowed.

As well as palaces, Sheki is famous for two foods.  The first is piti.  Fatty lamb and chickpeas are slow cooked with a few spices to create a liquid stew.  It’s served in what looks like a giant terracotta coffee cup, red hot.

You tear pieces of bread into bit size pieces and place them in a soup bowl.  Then you drain the liquid from the piti pot into the bowl, sprinkle with sumac and eat the soaked bread.  Then mash the lamb and chickpeas into a chunky paste in the pot and eat it as a second course with more bread.  It’s delicious. 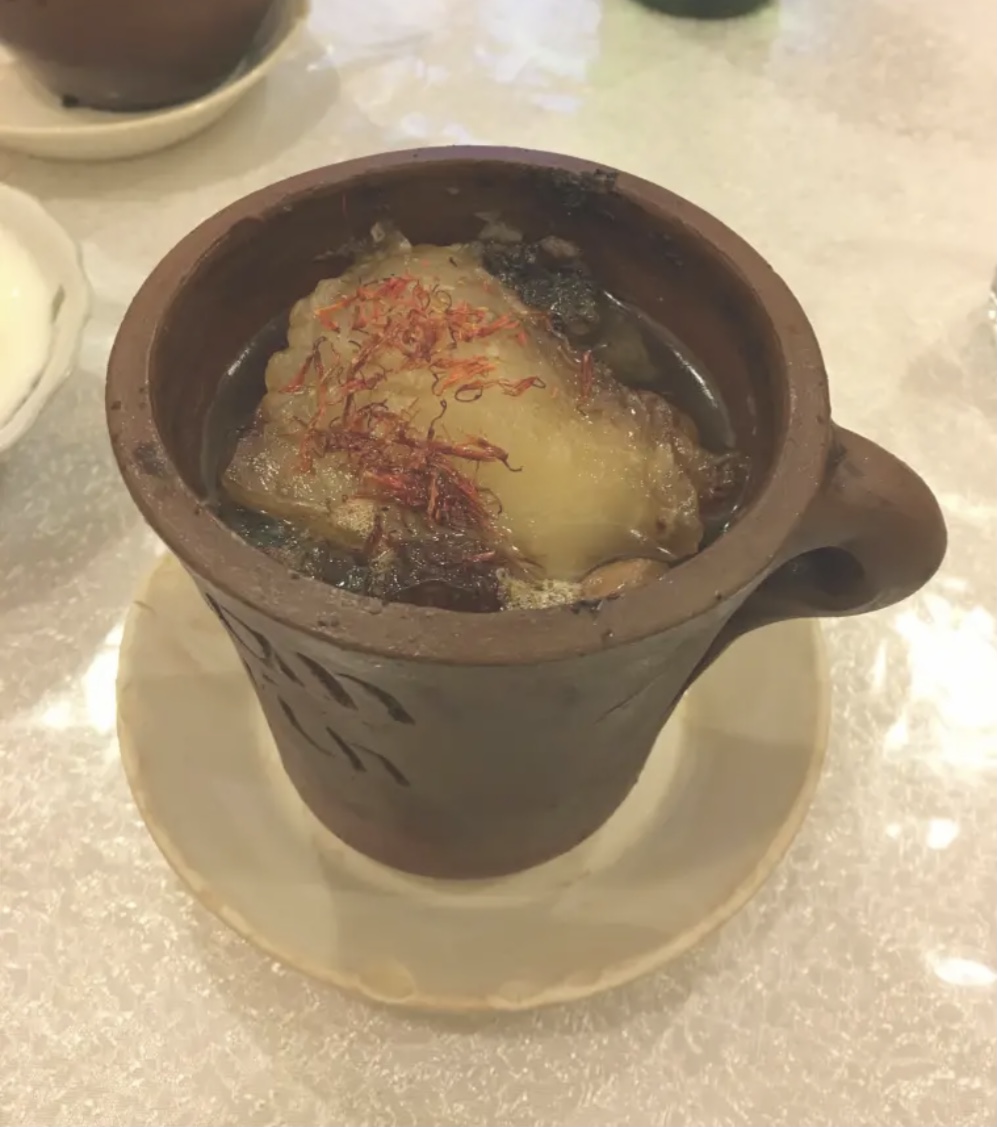 Sheki is also famous for its sweets, especially Sheki halvasi, which is nothing like halva.  It’s more like a super-syrupy baklava without the pastry.  We found it way too sweet, but this very friendly shop owner was so excited to get customers from Australia he insisted we take a photo of him with his mum.  And the halvasi, of course. 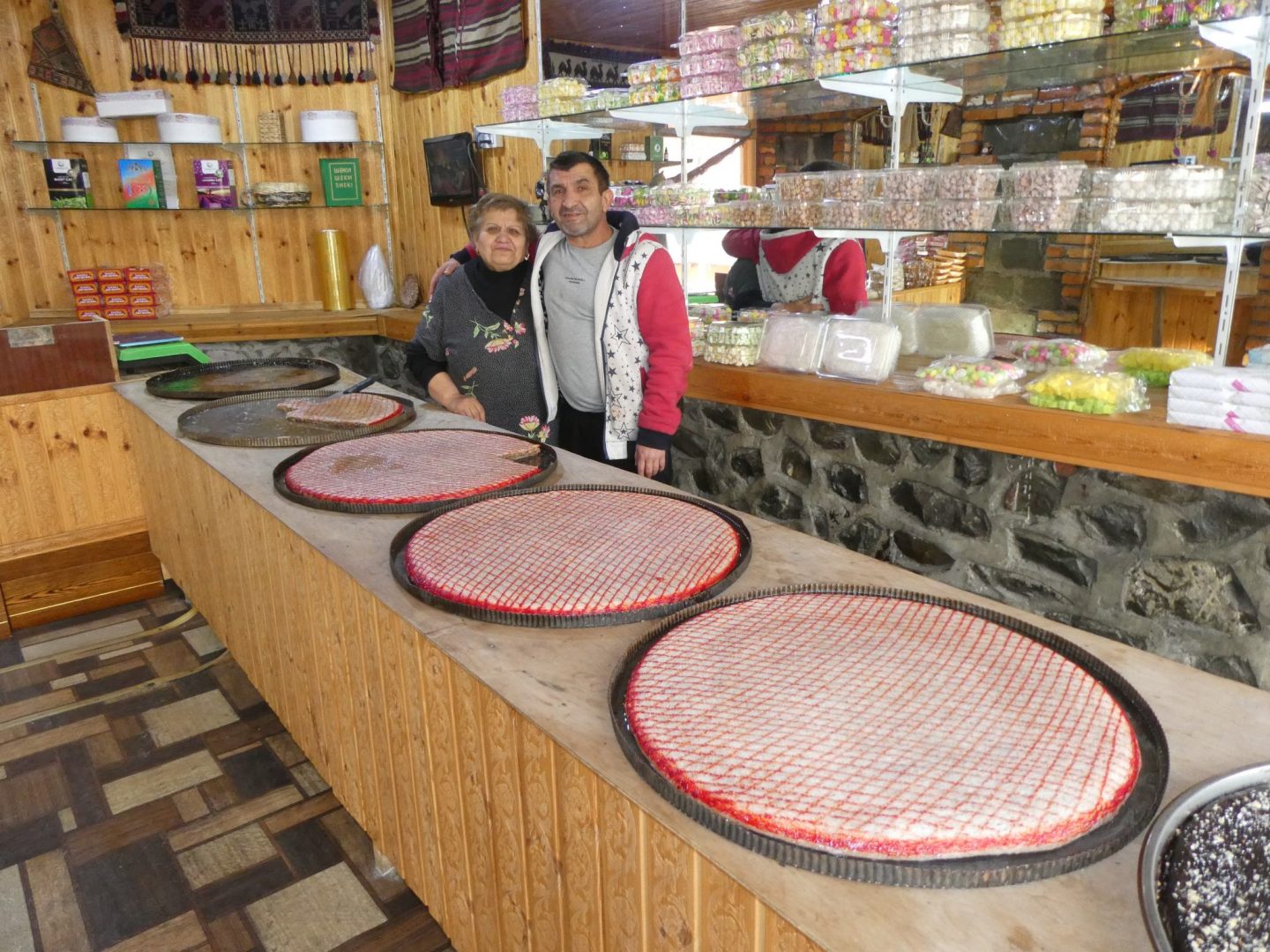 The day before we planned to return to Baku we discovered the only bus going next day was full.  So we stayed an extra day in Sheki and caught a bus further up into the mountains to Ilisu.

In the countryside past the village there’s a short hike up a hill to a waterfall. 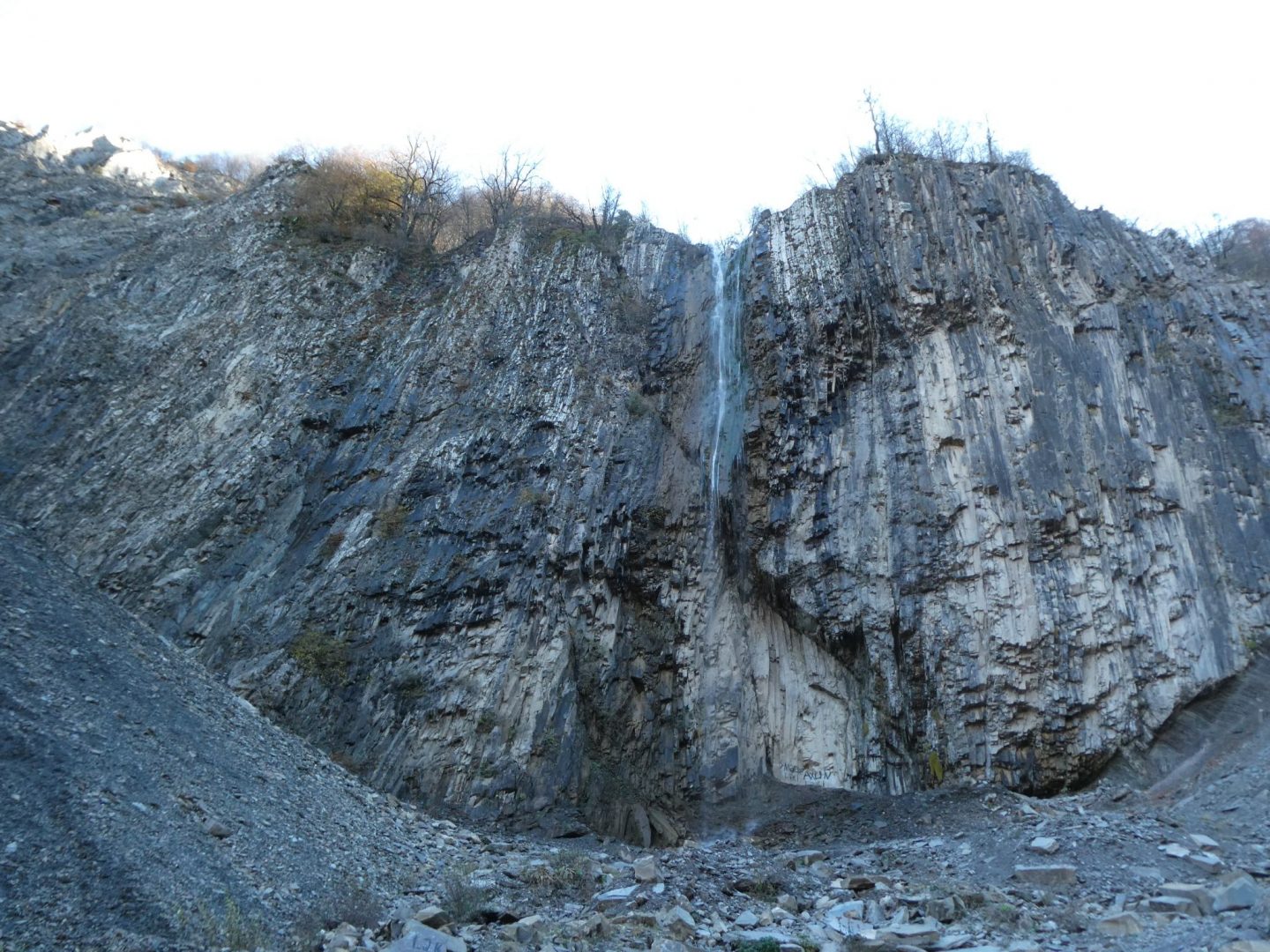 The waterfall is nothing special, but the area is quite lovely and it was good to get out walking in the countryside. 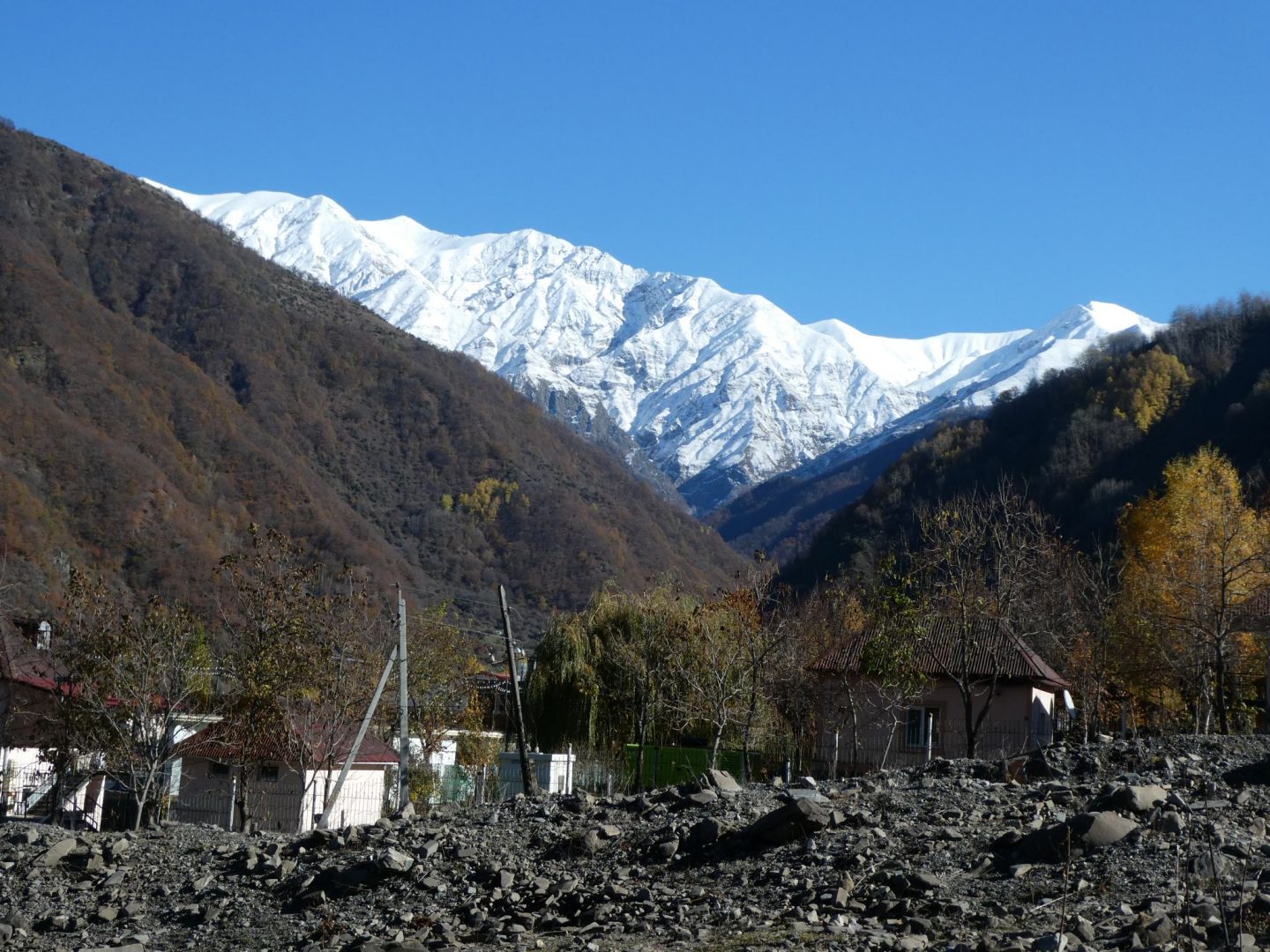 You just have to ensure you head down the valley afterwards not up.  Just around the bend that valley crosses into Russia.  And this is a closed border zone. 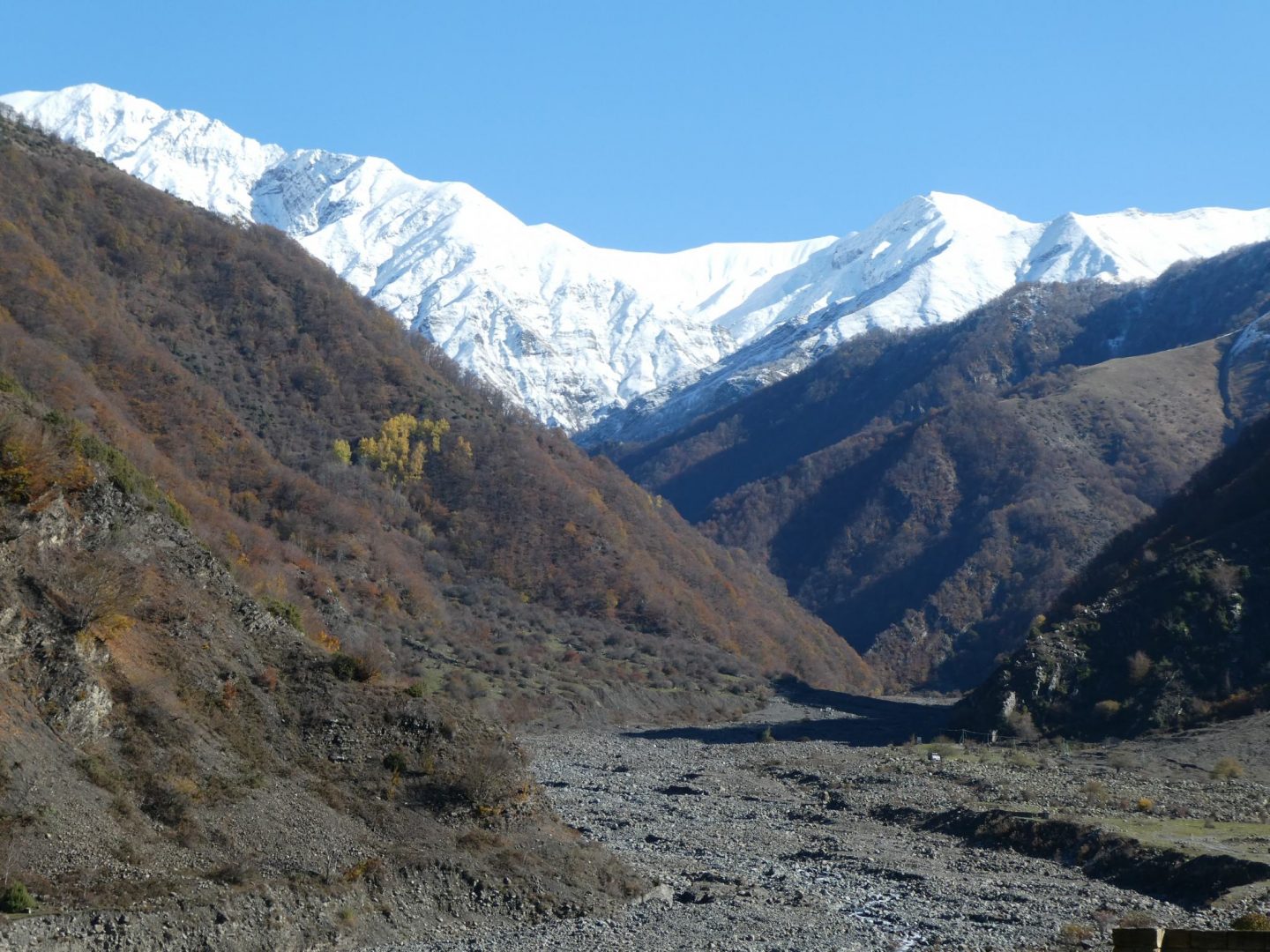 So we headed down through Ilisu village which was quiet and picturesque. 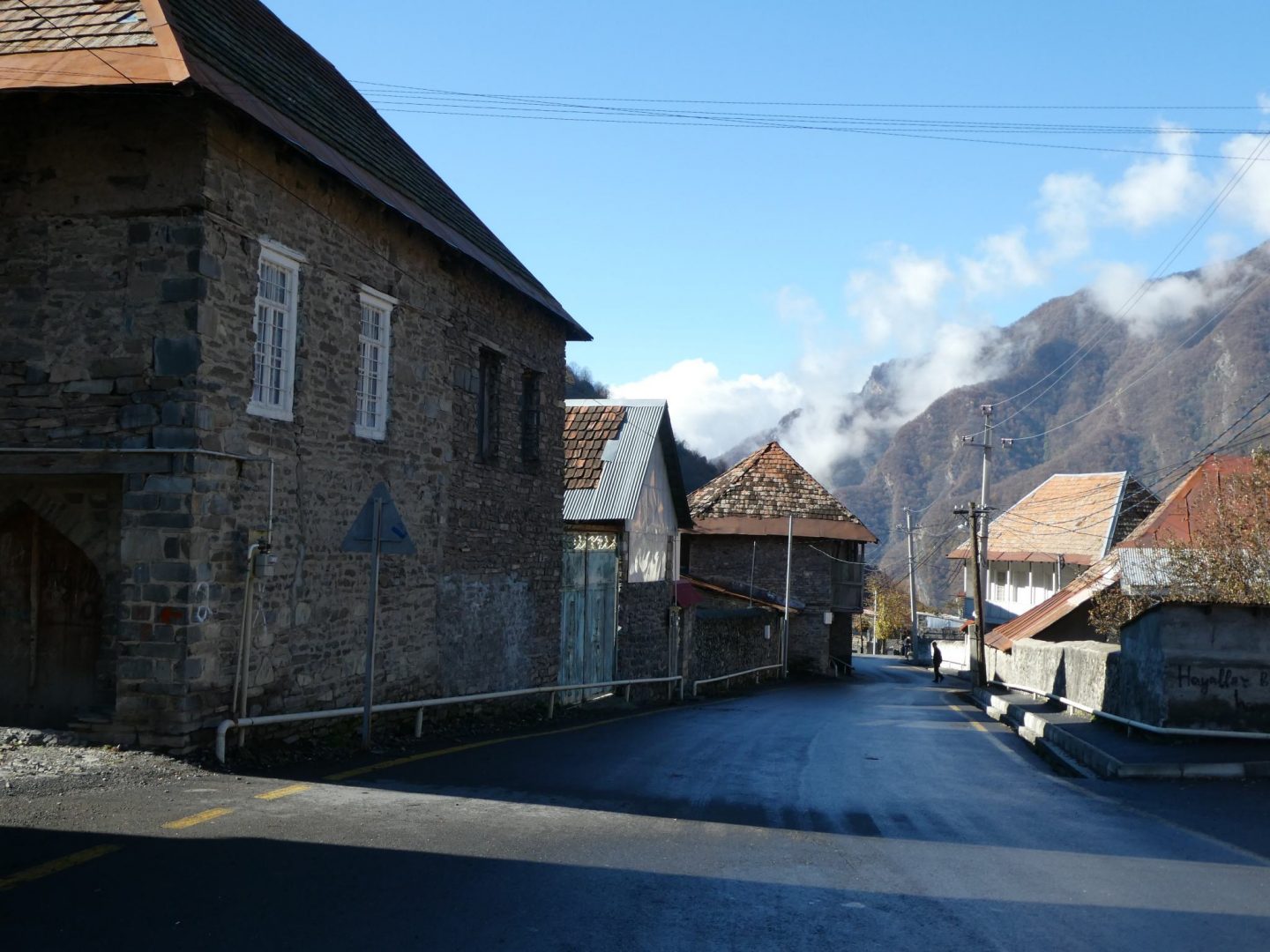 You know not much happens here when the traffic coming around the corner is unaccompanied cows. 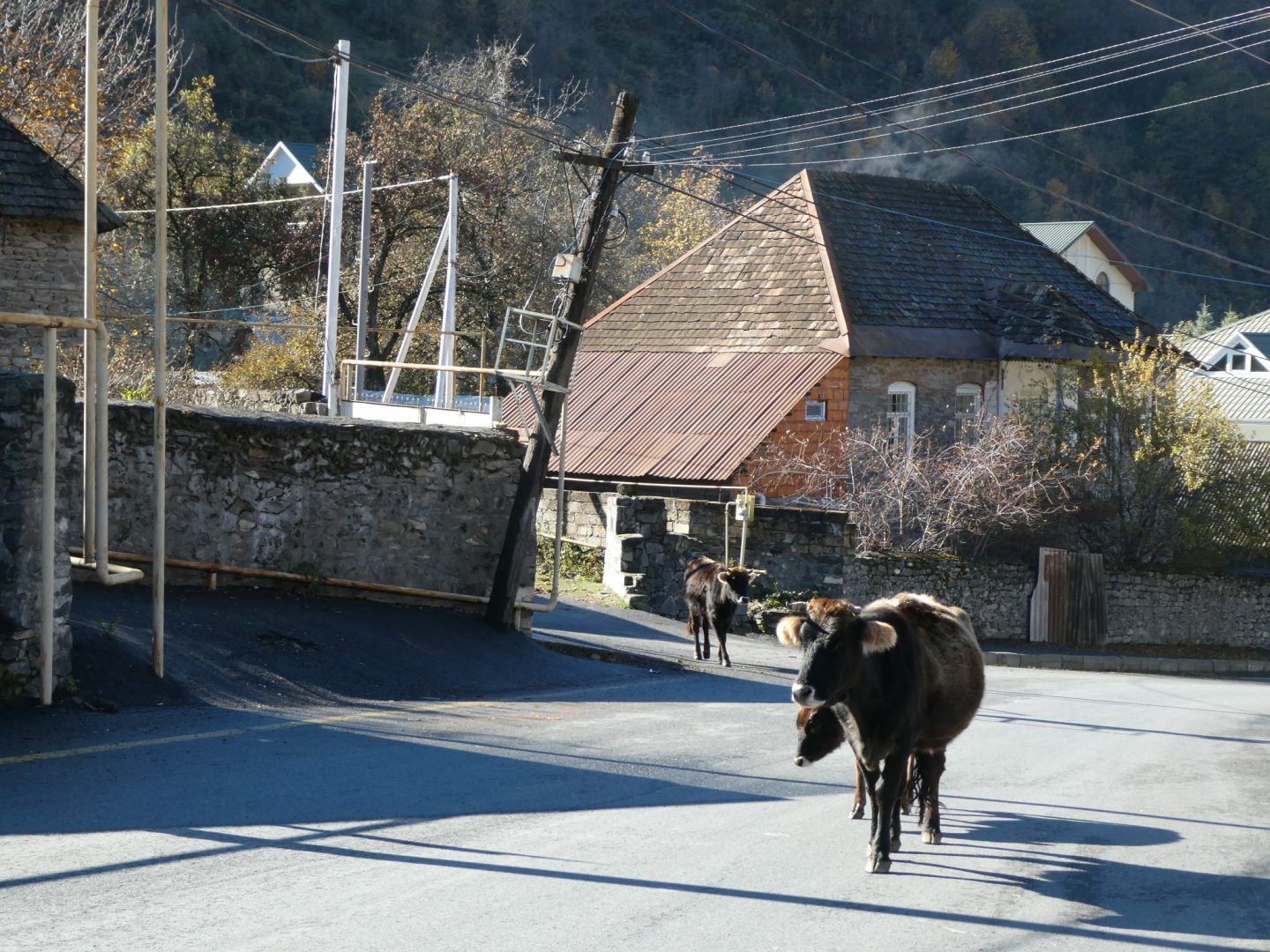 Just out of Ilisu we hailed a passing bus to Qax (pronounced Gakh).  It has some elegant wooden buildings. 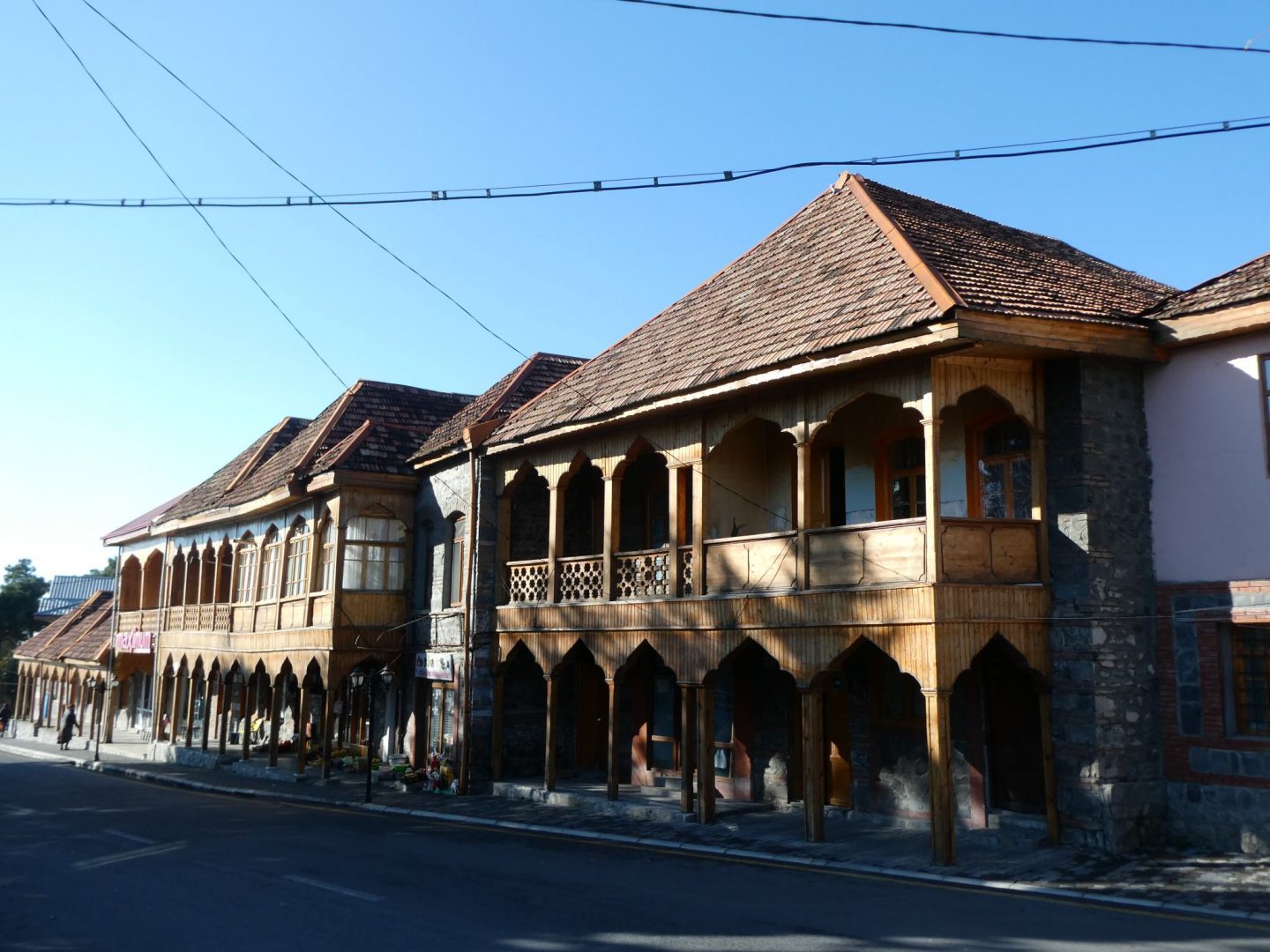 But it was a really odd place. It didn’t seem to have a town centre.  There was a pedestrianised precinct which was obviously designed as an artisan village, presumably for tourists, but nothing was open and we couldn’t quite work out where they thought the tourists might come from anyway! 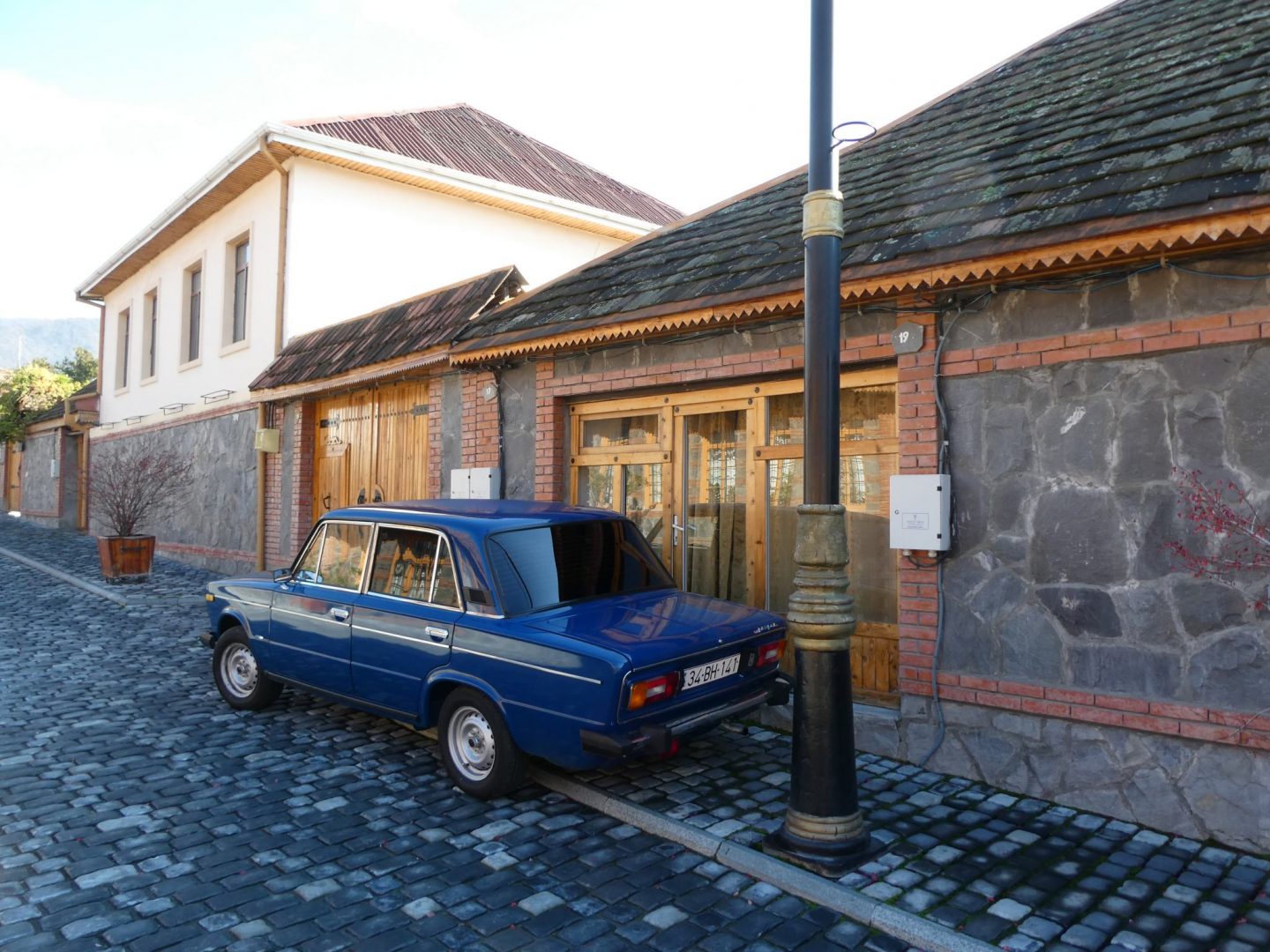 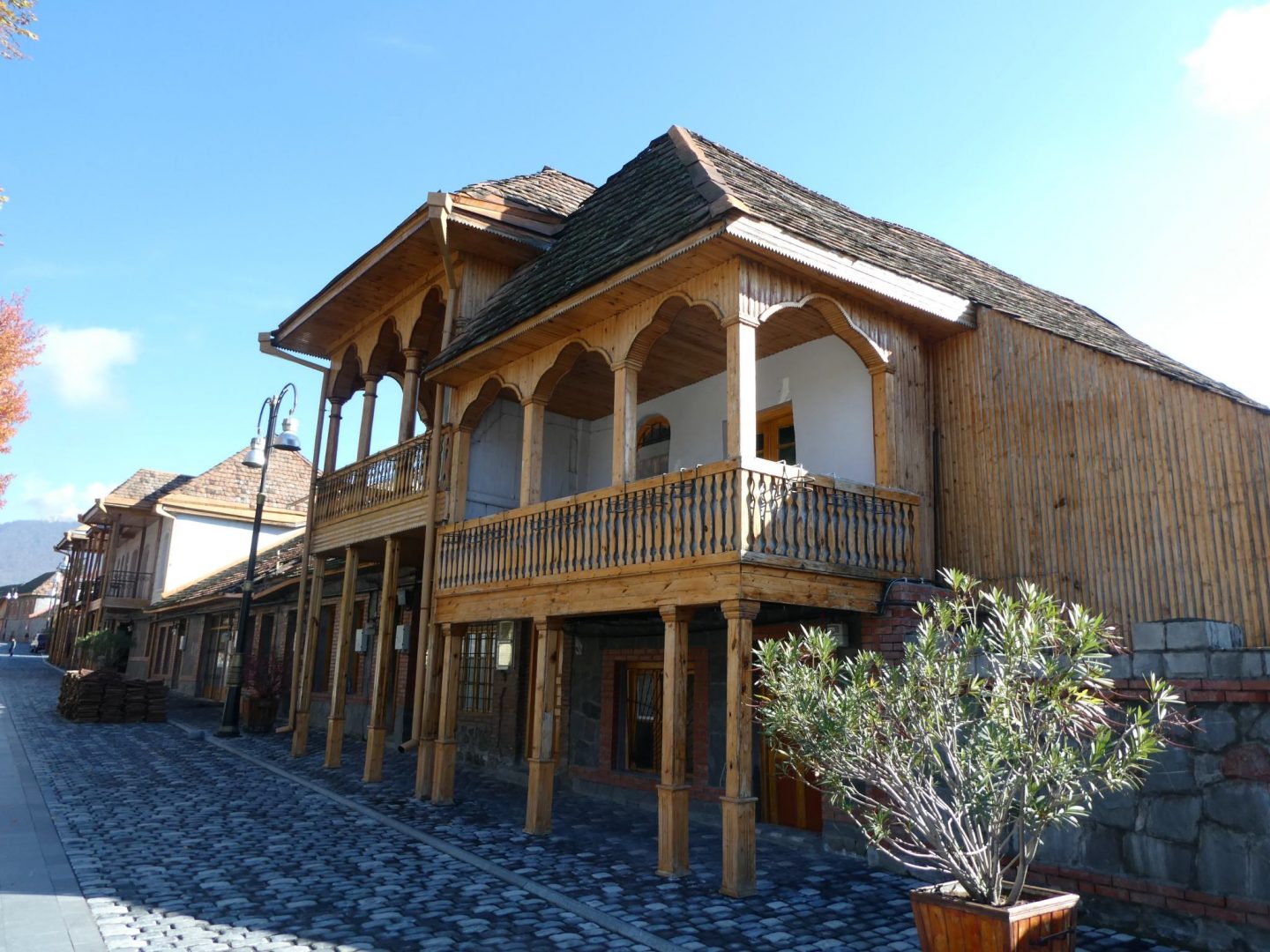 Perhaps it’s more lively in the summer.  Autumn is well advanced here.  It was getting cooler and although we had a fine, clear day in Ilusu, Sheki was wet.  We were keen to head south and catch a final burst of European summer.  So it was back to Baku and a plane to Milan.  Yes, we know, Milan isn’t exactly warm in November.  But it was a convenient transit point en route to the promise of a warm micro-climate at Lake Garda.  See our next post for more.