The market town of Lourdes in the foothills of the French Pyrenees has a population of just 15,000.  But it receives over six million visitors a year, has its own international airport, and more hotel capacity per square kilometre than anywhere in France other than Paris.

All because it’s one of the world’s most important Christian pilgrimage sites.  Well, maybe some people come here to hike in the mountains in summer, but the main business here is religious tourism.

We flew direct from Malta and it was immediately clear that winter is on its way.  There was snow on the Pyrenees and it was bitterly cold. 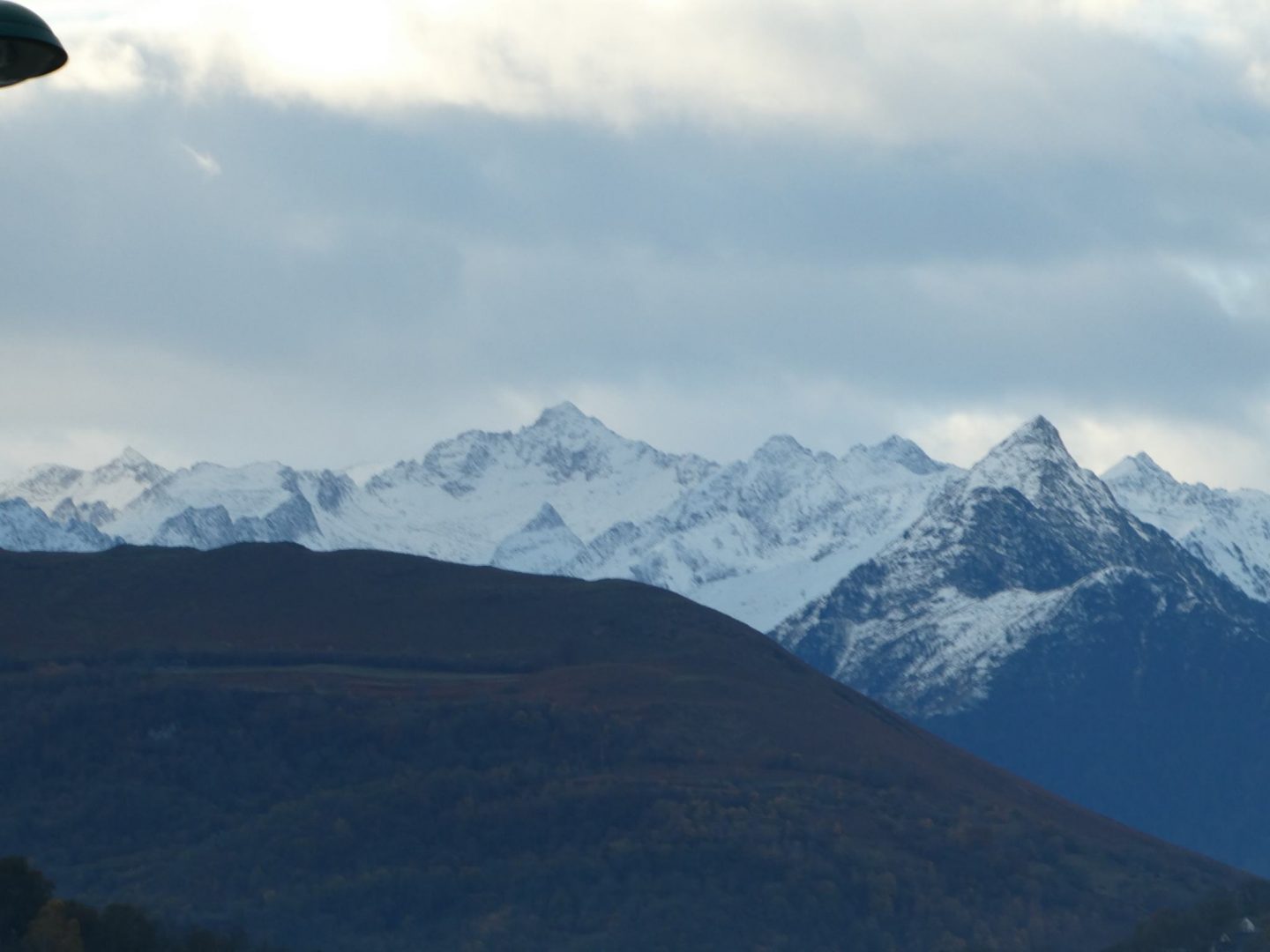 In 1858, 14 year old Bernadette Soubirous was in the woods collecting firewood with her sister and a friend.  Lagging behind the others, she says she witnessed a dazzling light and the image of a white lady in a grotto.

Many of the townsfolk thought she had a mental health problem.  Others were persuaded, particularly after the previously muddy water flowing from the grotto suddenly turned clear.  A miracle indeed.

Over the next six weeks, Bernadette reported fifteen more visions of the lady, who identified herself as ‘the Immaculate Conception’, spoke of the virtues of penance and prayer, and asked that a chapel be built.

The Catholic Church ‘authenticated’ the apparitions and a chapel was built.  There are now two basilicas over the grotto, one big enough for 25,000 worshippers. 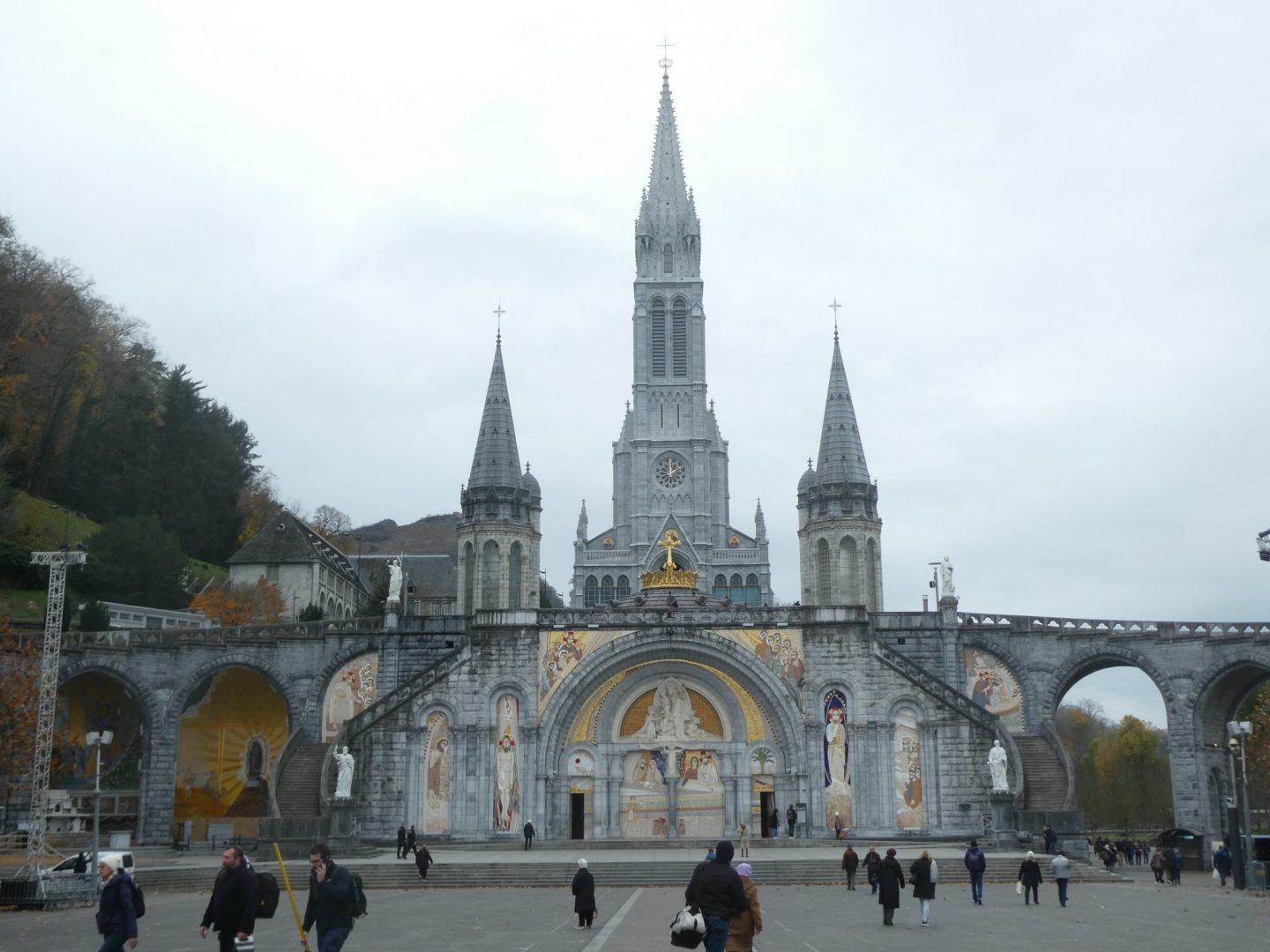 There’s some interesting mosaics on the facade. 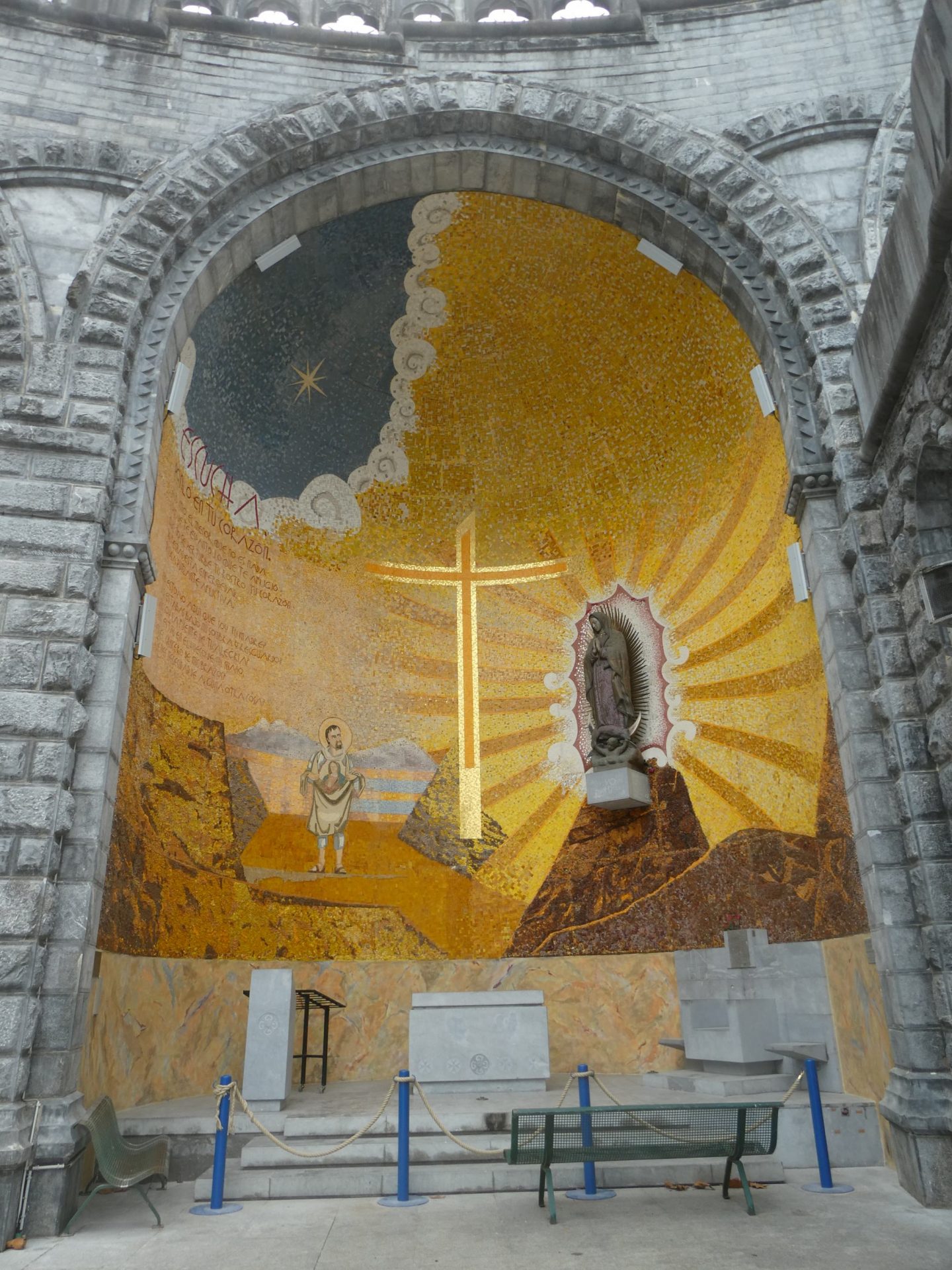 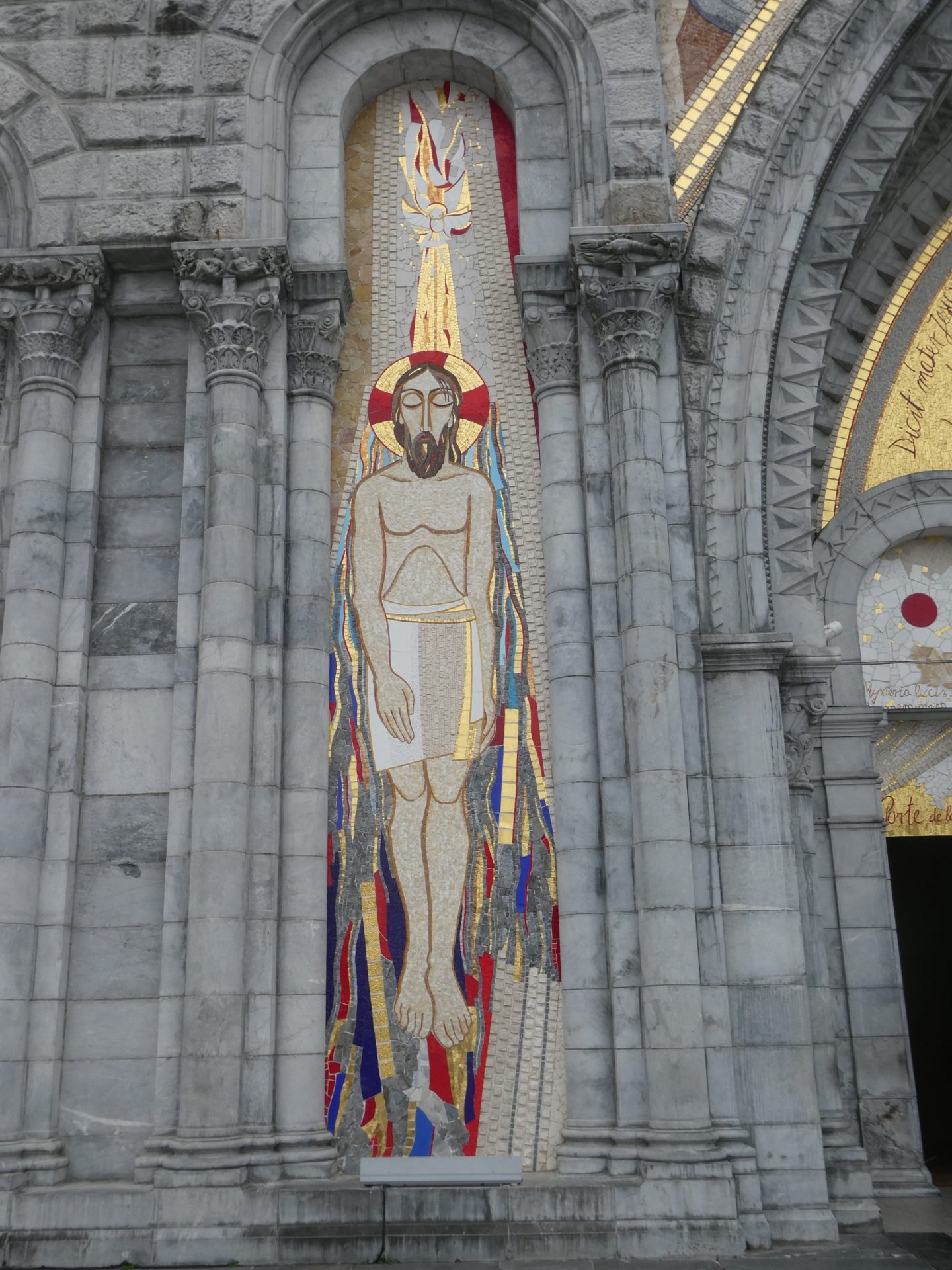 Inside, a series of paintings illustrate the key events in the life of the Virgin Mary. 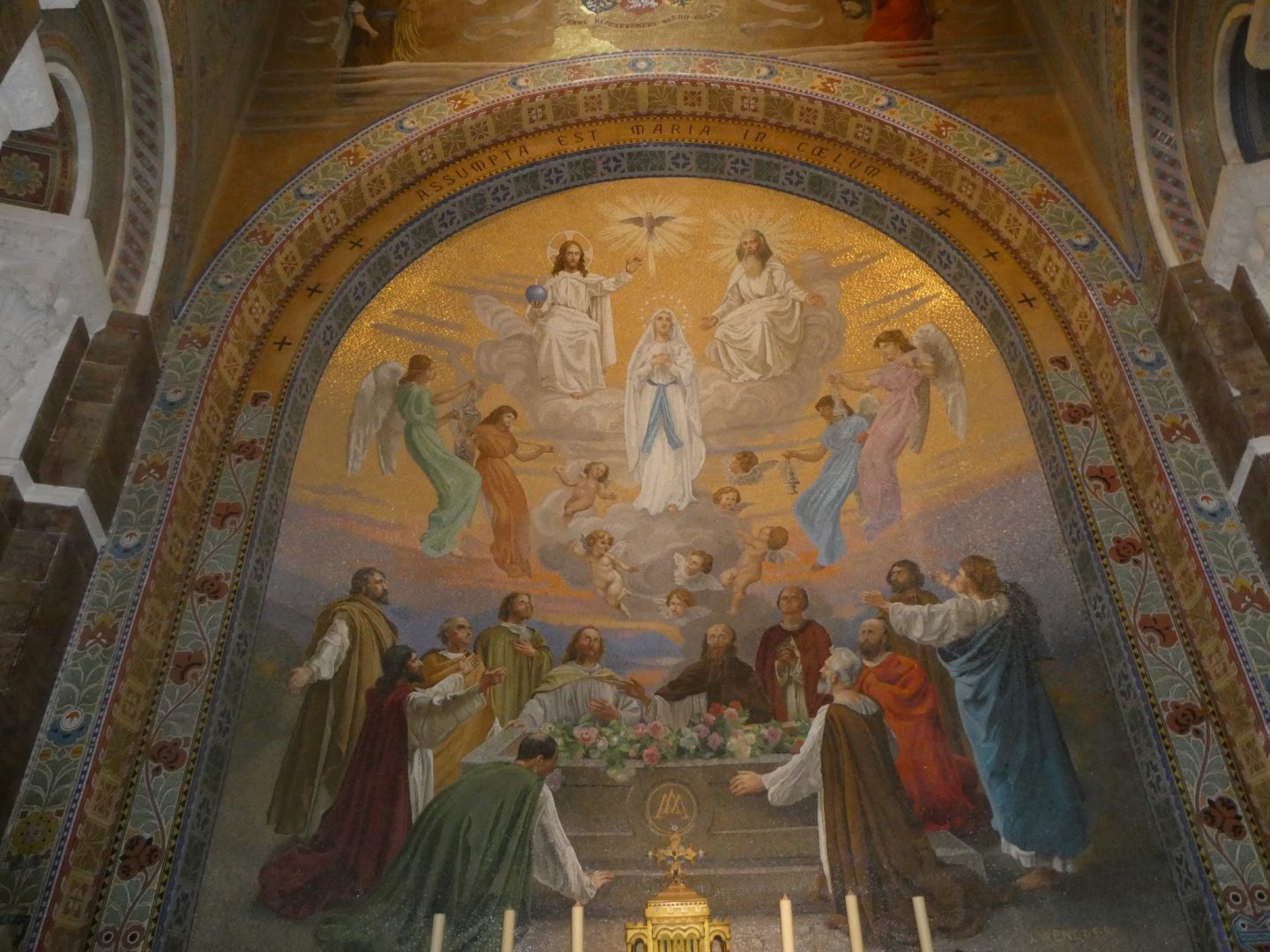 Pilgrims file through the grotto, where a statue of Mary has been placed in the spot where Bernadette says the apparition appeared. 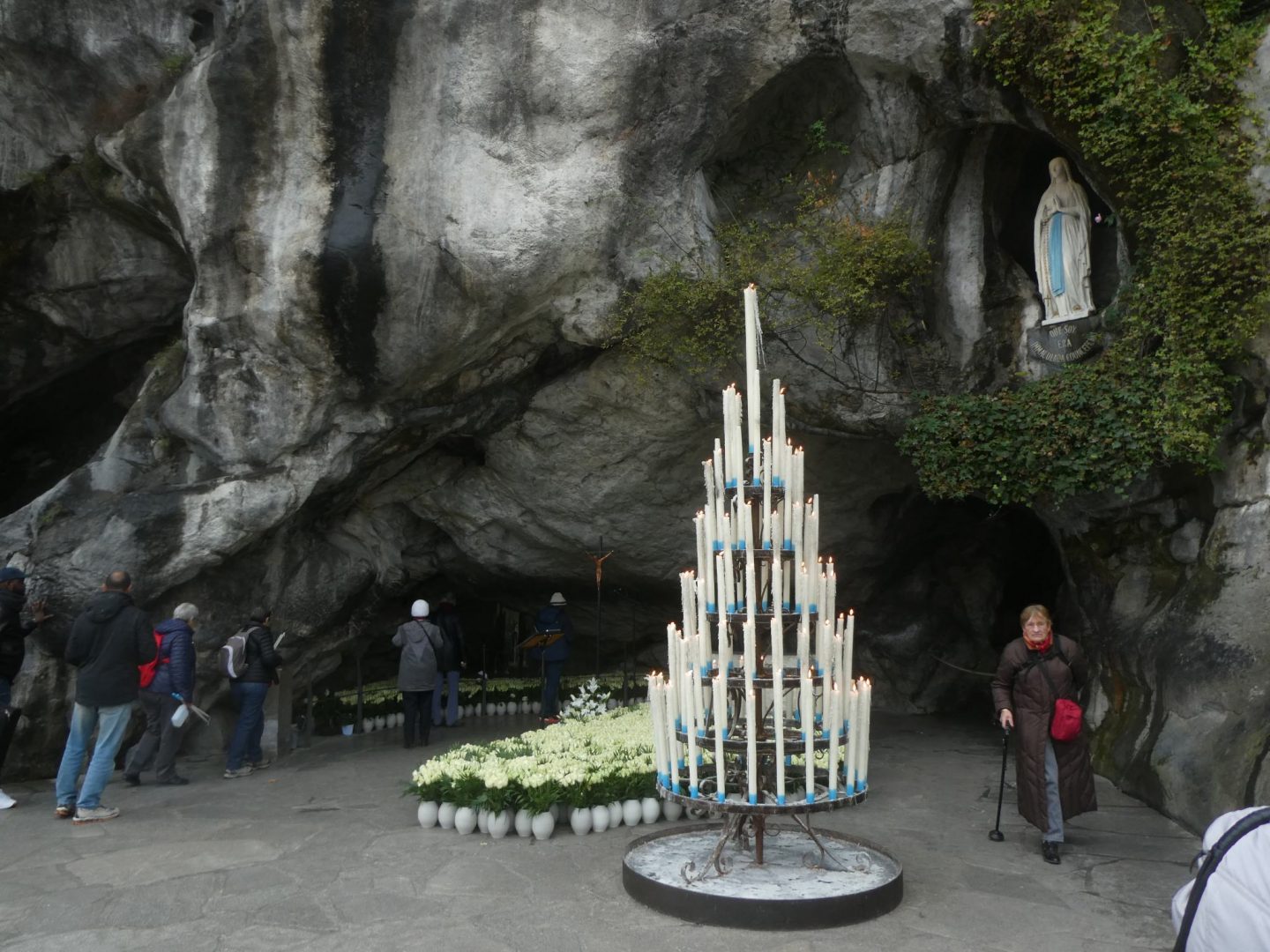 The grotto waters, which continue to run clear, are believed to have miraculous healing qualities.  In the 165 years since Bernadette’s visions, the Lourdes Medical Bureau has ‘verified’ 70 miracle cures attributable to the waters.  On the basis that they are otherwise inexplicable.

Scientific testing has confirmed there’s nothing unusual in the waters.  Bernadette herself said “the water will have no virtue without faith”.  But plenty of people have faith.  The waters are now piped to a wall of taps where believers can fill containers with takeaway holy water. 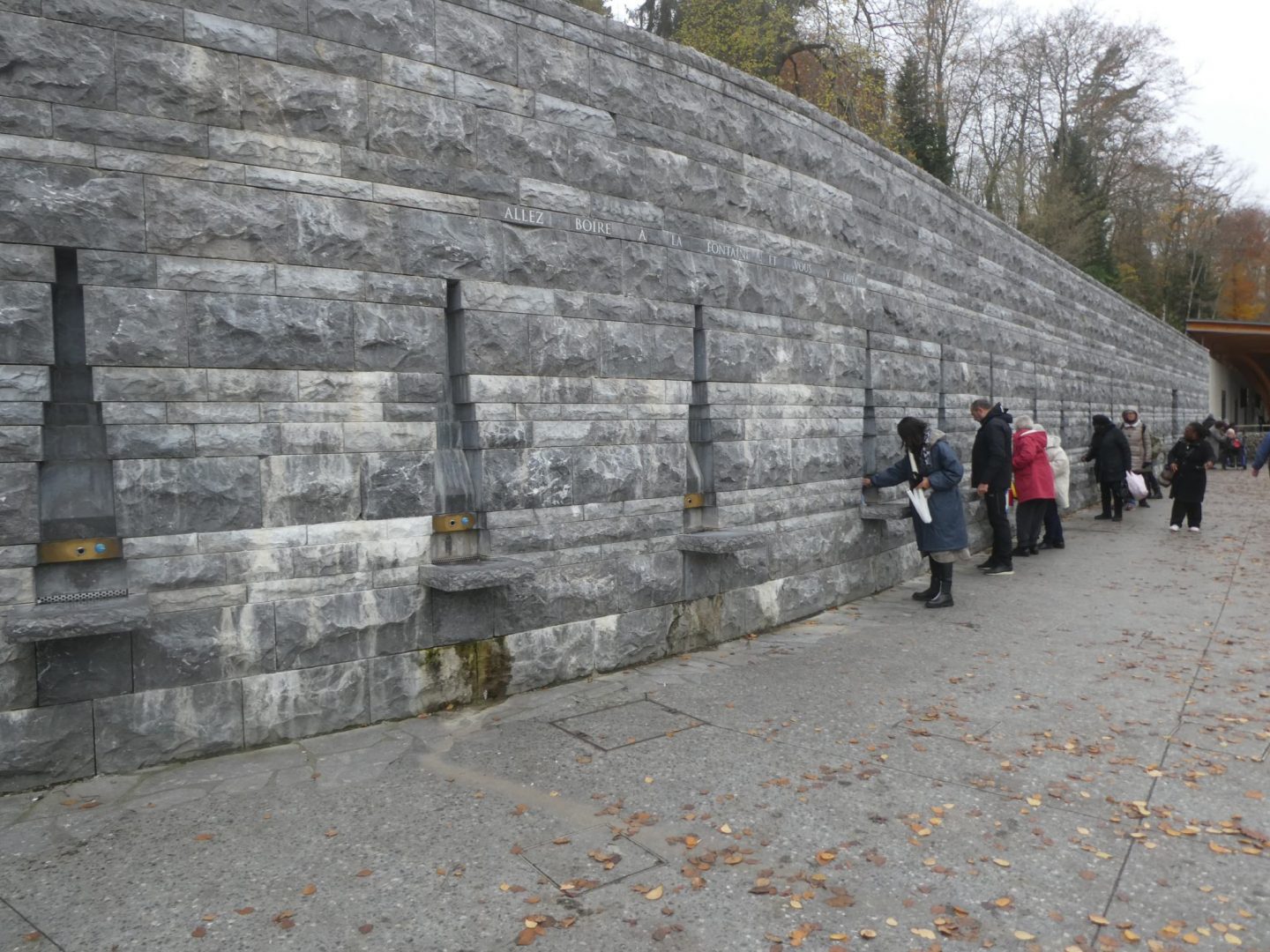 The truly devout can bathe in the grotto inside a pavilion erected for privacy.  We say ‘truly devout’ because the waters are icy cold all year round.

In the grounds, a path winds through the Stations of the Cross.  For pilgrims who feel penance necessitates pain, we’ve read that a practice has evolved of shuffling on their knees.  We didn’t see any shufflers when we were there, though. 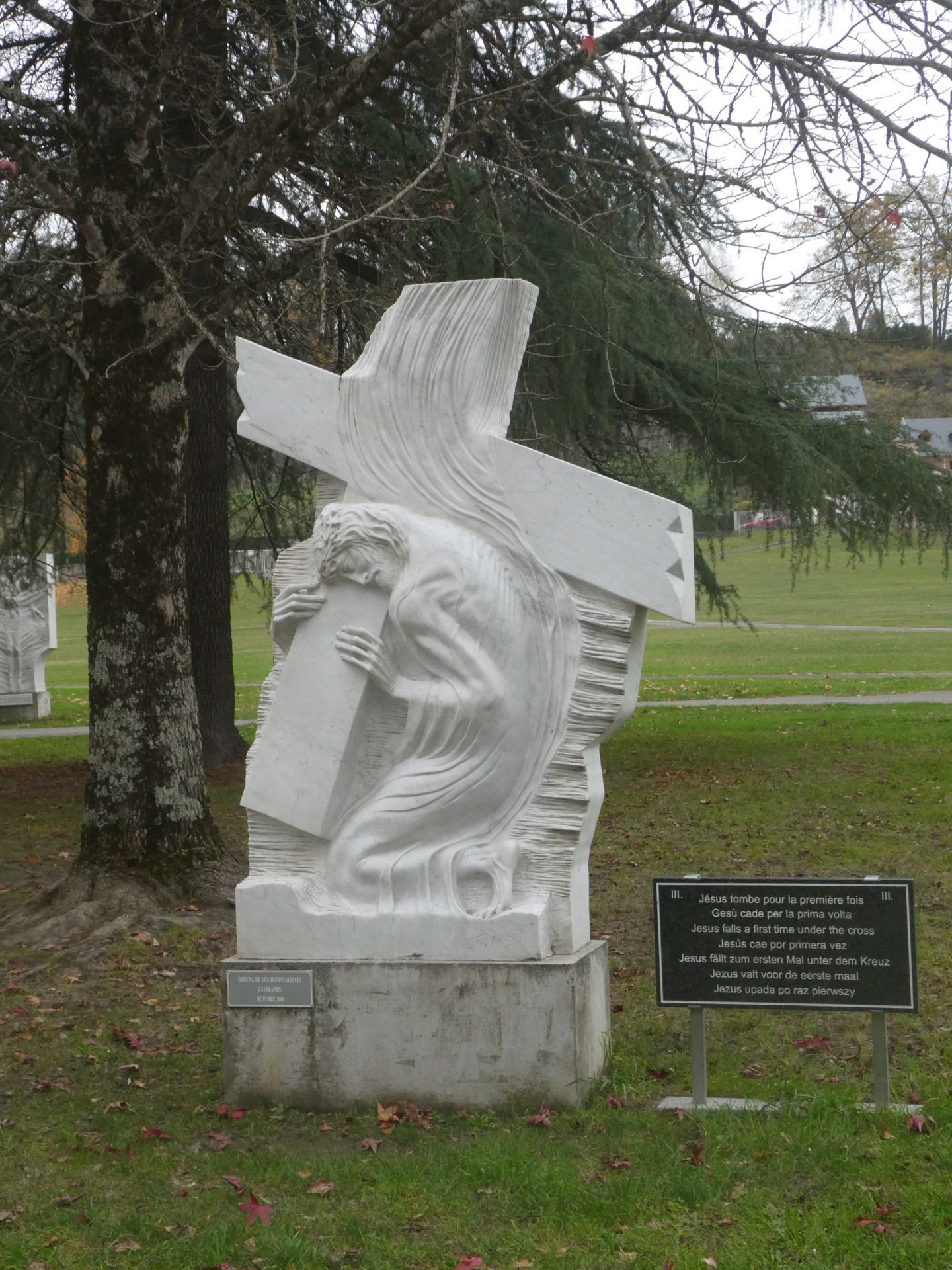 For devotion of a different kind, you can light a candle. 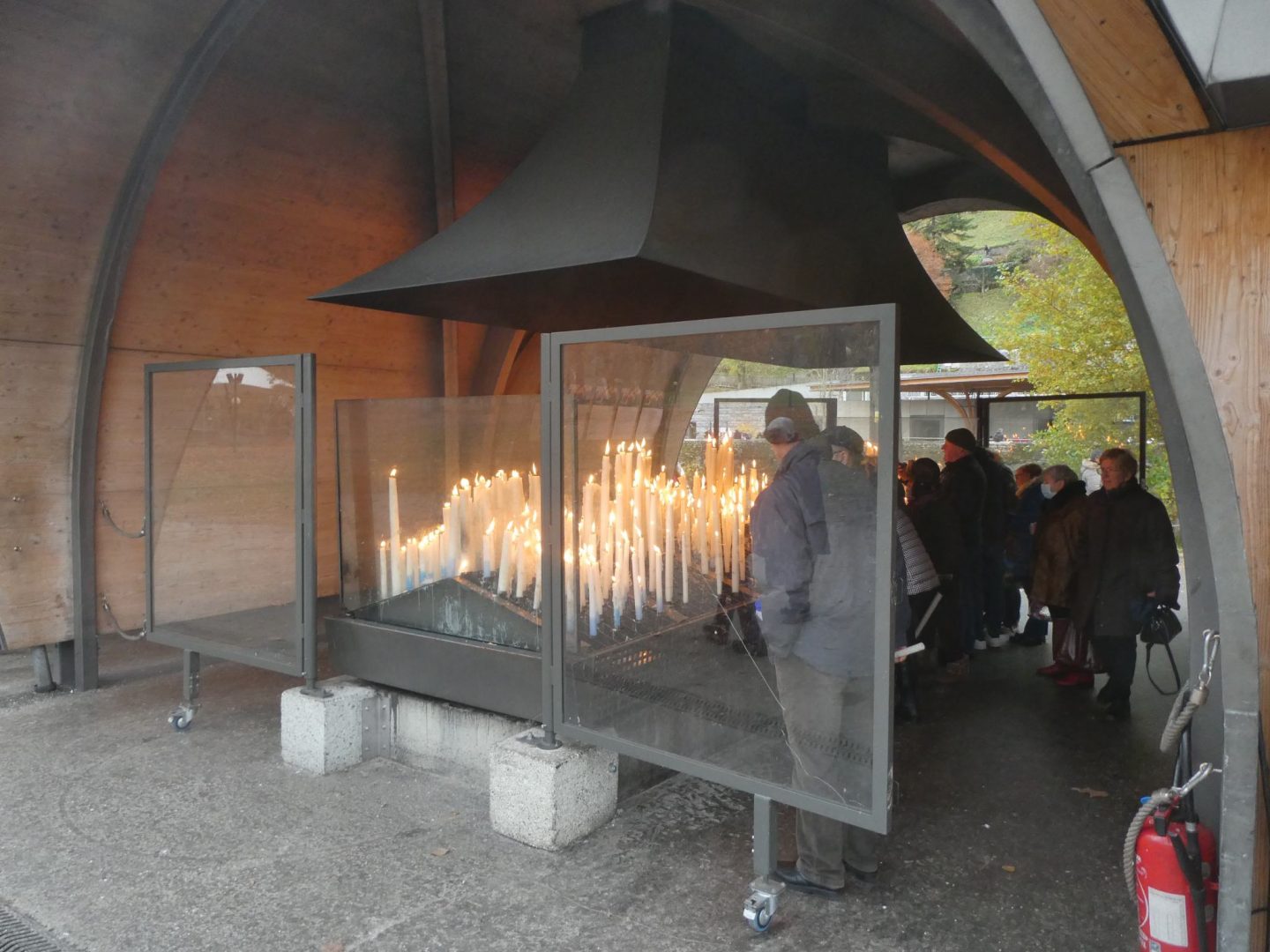 Not just any candle.  This rack had candles costing up to 500 euros. 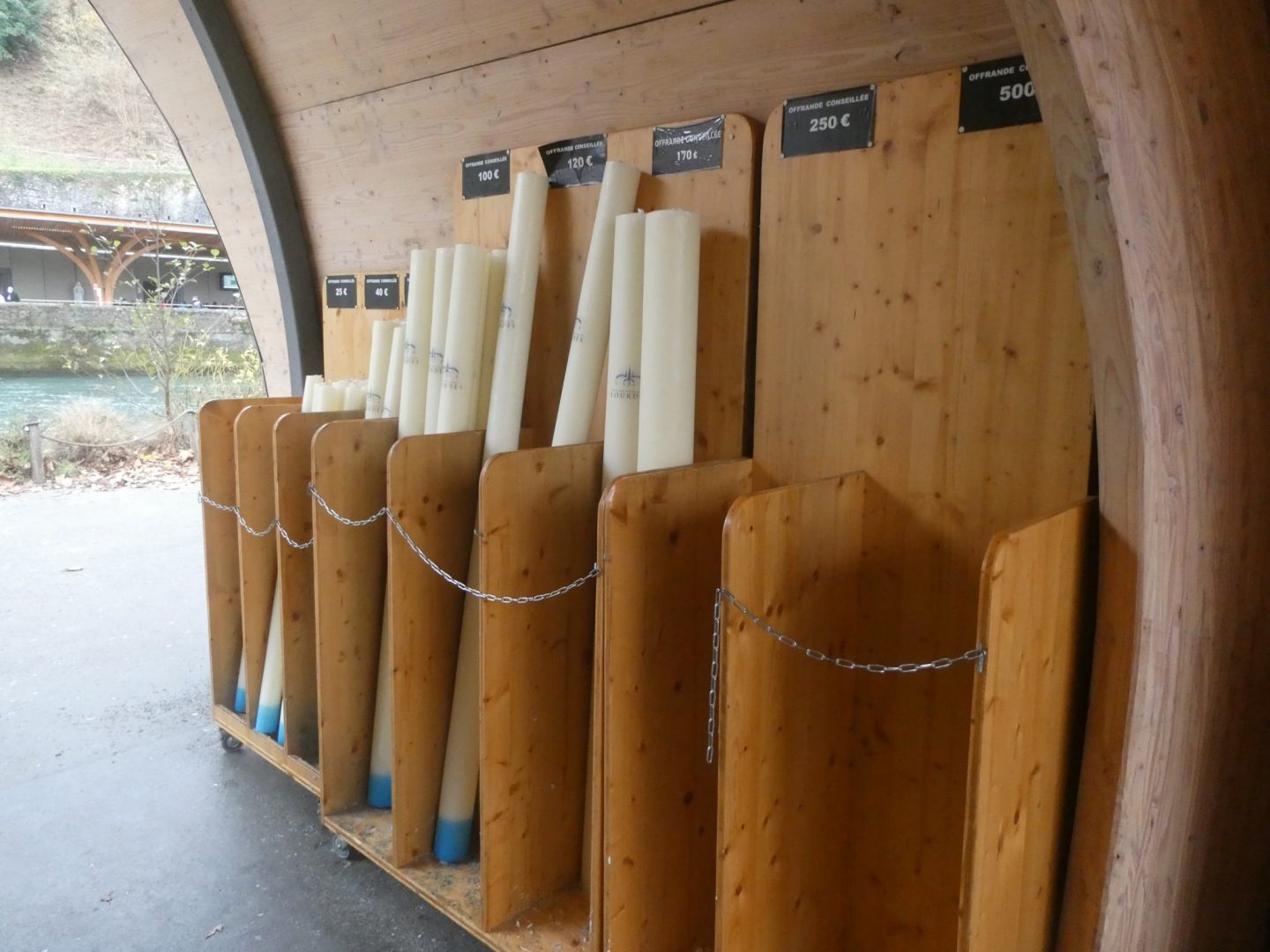 We saw some of the giant ones lit.  Pilgrims come from all over the world and sometimes leave messages attached to their candles.  We saw notes from as far as away as India and Malaysia. 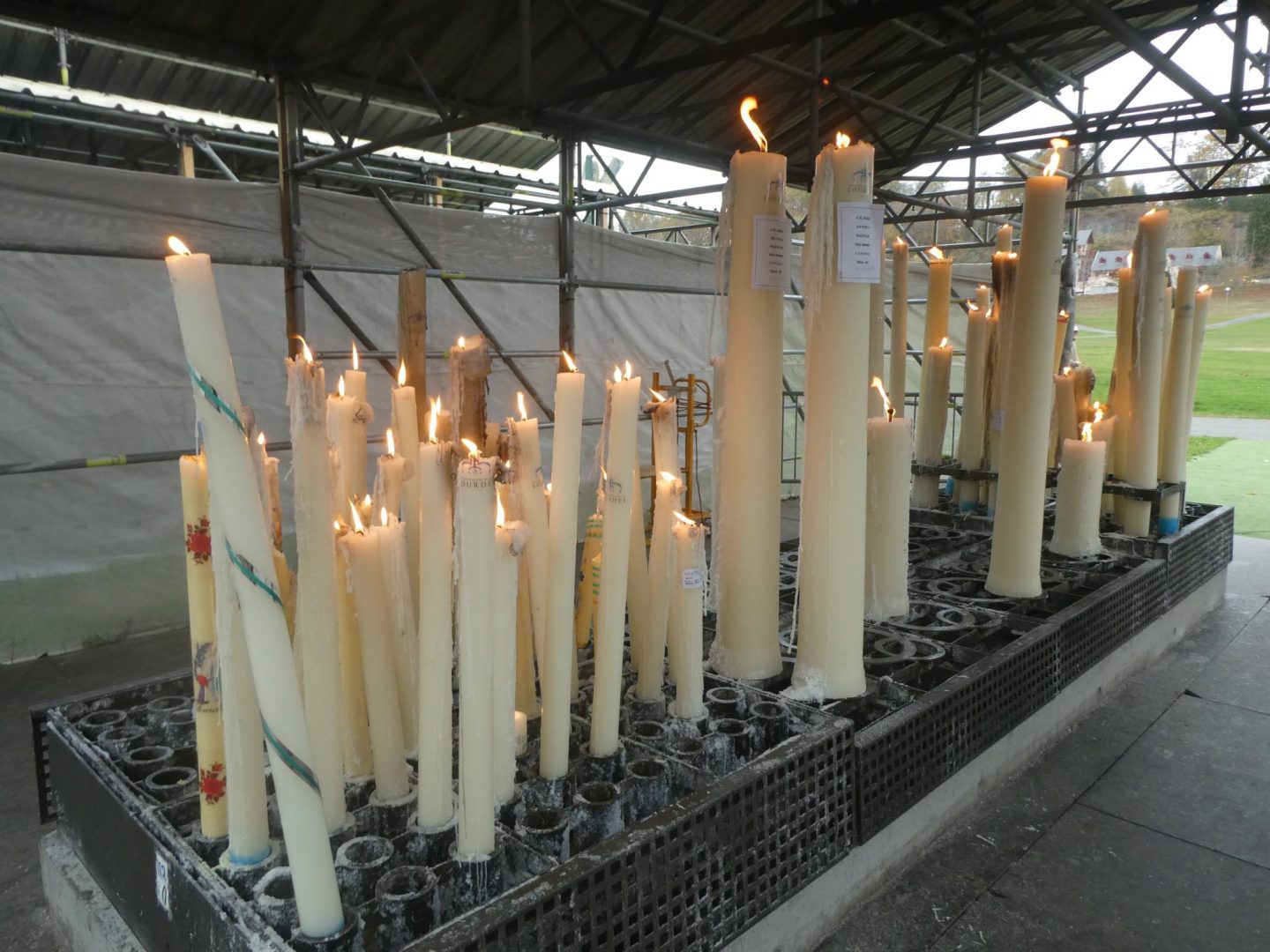 Bernadette’s father was a miller.  The water mill where the family lived for the first ten years of her life is open and visitors can see Bernadette’s bedroom, the kitchen and some old millers’ grind stones. 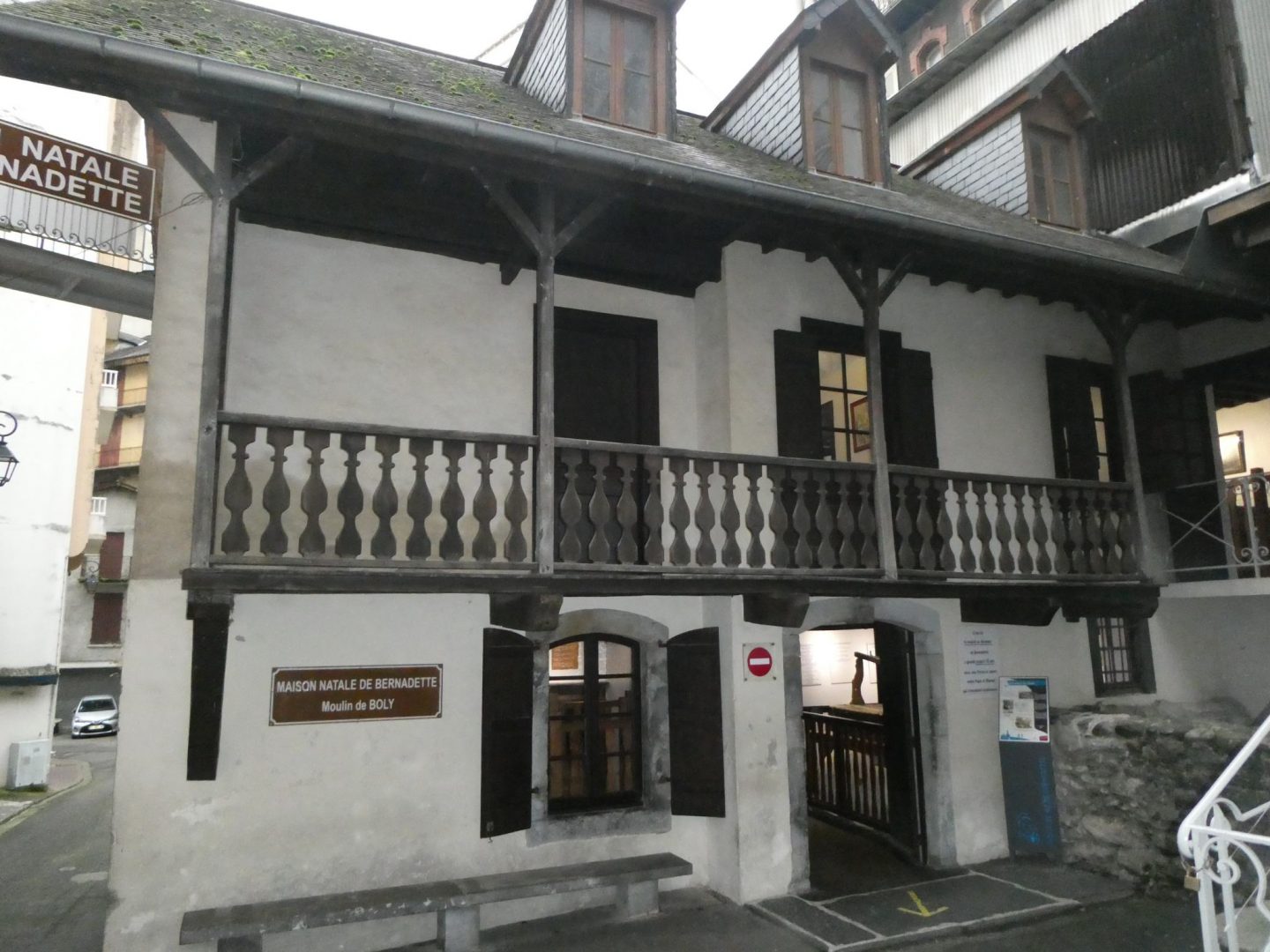 At the time of the visions, her family had fallen into poverty and were living in a one-room basement formerly used as a jail.  The Abbott of Lourdes gave the family a house, improving their circumstances considerably.  That house is still in existence.  It was previously open for visitors but had been gutted and was being renovated when we saw it. 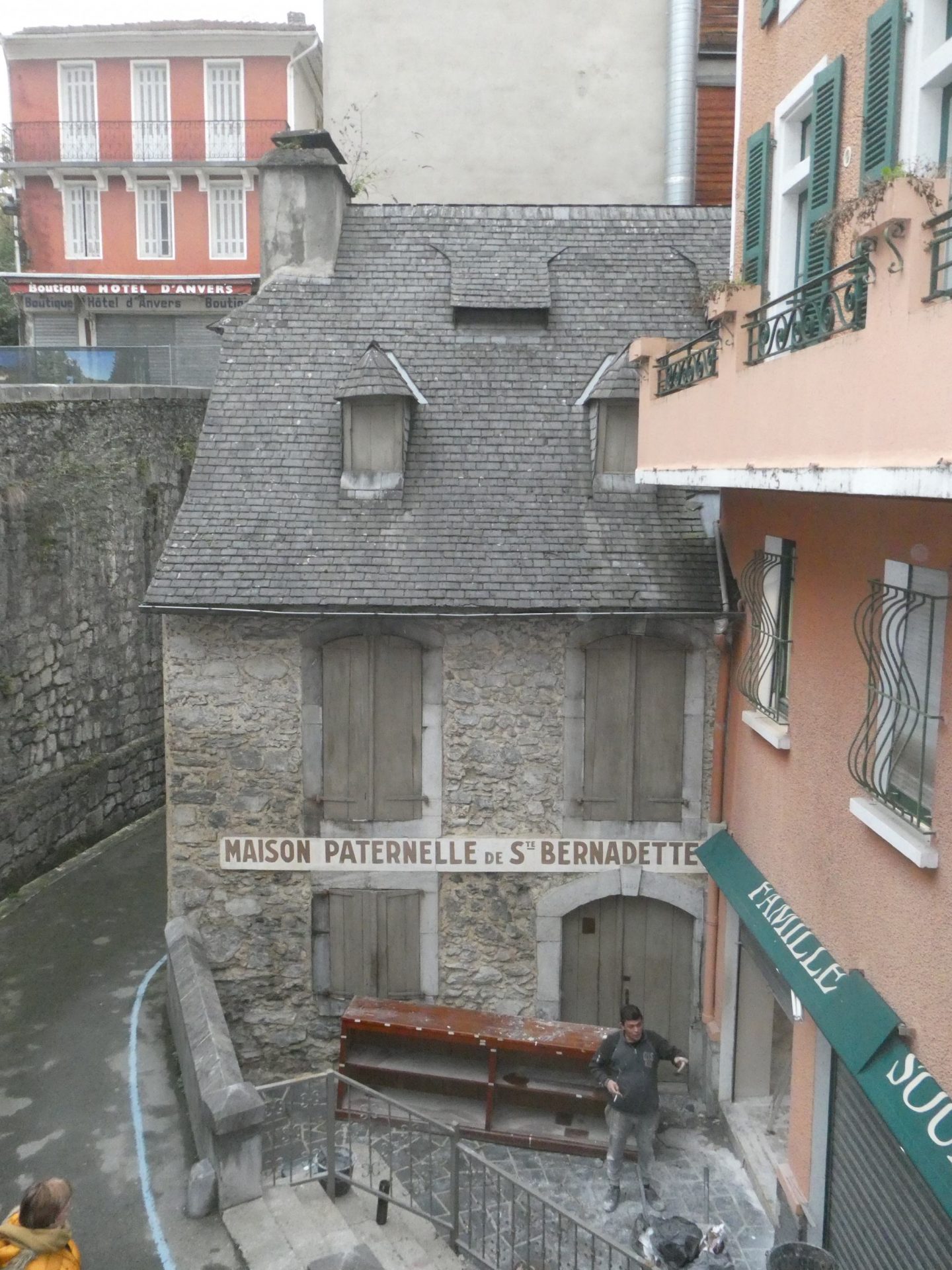 And as for Bernadette?  She had no more visions.  She detested attention being focussed on her.  She claimed “the Virgin used me as a broom to remove the dust.  When the work is done, the broom is put back behind the door”.  She joined a religious order and lived a quiet life.  She’d been physically frail with chronic lung problems all her life after contracting cholera as a child.  She passed away from tuberculous aged just 35.  No miracle cures for her.