Until the 1850s, Arcachon was little more than a clearing in the Landes Forest on the shores of the Bassin d’Arcachon, a shallow bay where harvesters collected oysters with rakes and hand held dredges.

But oysters had become so highly prized by the wealthy that all along the Atlantic Coast, over-harvesting meant stocks were on the brink of collapse.

Emperor Napoleon III, known for his love of oysters, commissioned an expert to develop ‘Imperial Farms’ – oyster cultivation beds and permanent storage points – to boost production.  The Arcachon Bassin’s mineral-rich waters, shallow salt meadow and unique micro-climate were perfect for such an enterprise.

In 1857, Napoleon III signed an imperial decree declaring Arcachon an autonomous municipality.  Around the same time, a rail line from Bordeaux was completed.

With an imperial imprimatur, new cultivation techniques to boost production and a means of transporting the slippery delicacies to bigger markets, commercial oyster farming on a grand scale was born.

Since then, the bay has been through boom and bust cycles from disease, environmental pressures and over-fishing, but today it’s a well managed resource producing around 10,000 tonnes of oysters per year.

Fortunately they don’t all go to far away destinations.  At the town’s central market, conveniently located on the square outside our apartment, oysters were a bargain.  About one third of the price we saw the same ones selling for in a similar market in Paris a week later. 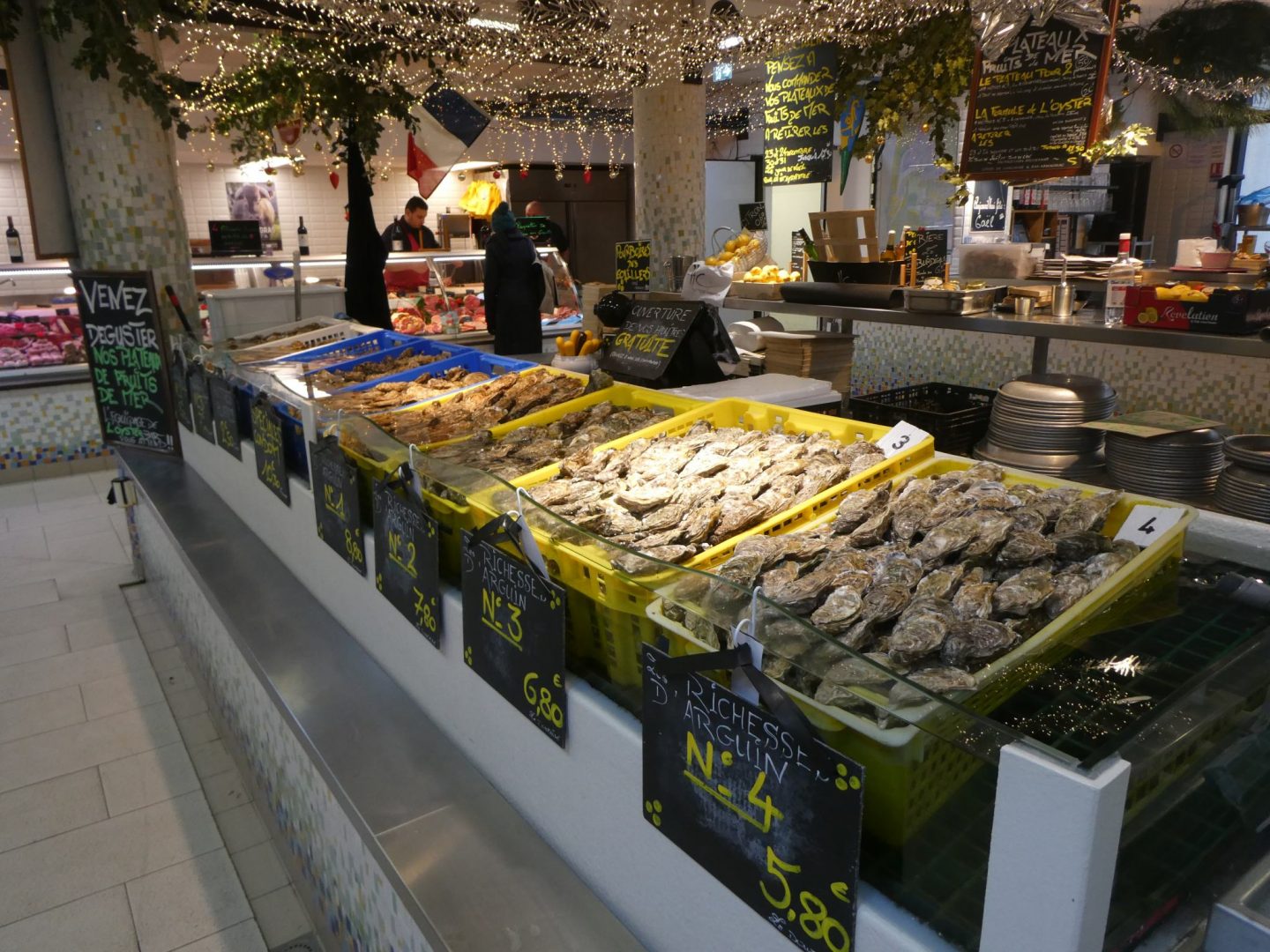 Indeed the market was a treasure trove of gourmet goodies. 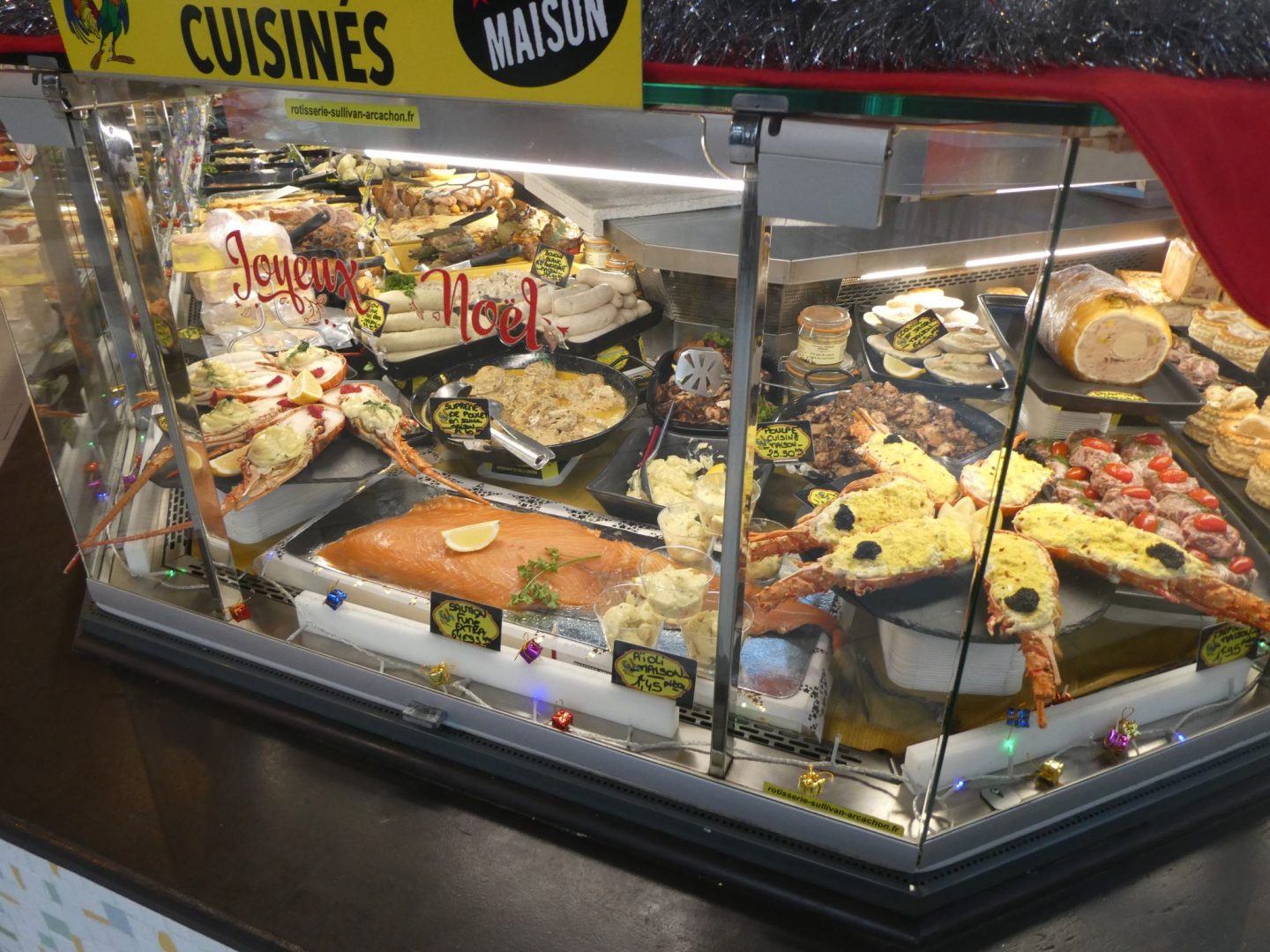 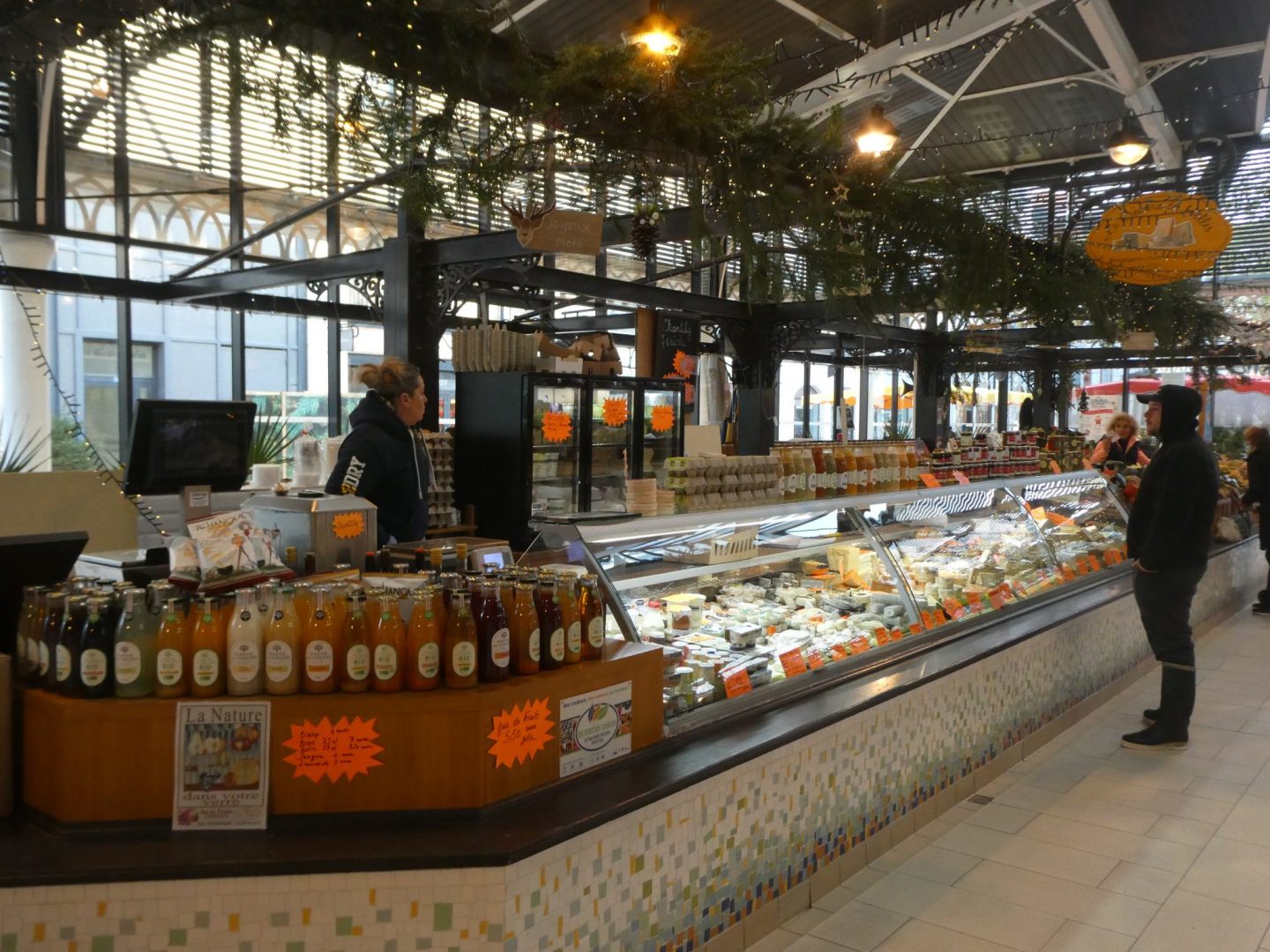 The completion of the railway also coincided with a fad for sea air and salt water as treatment for a range of ailments.  Canny investors built bathing establishments in Arcachon to attract the Bordeaux bourgeoisie.  It became an ultra-fashionable seaside resort town.  Fresh air, therapeutic waters and lots of oysters.  What’s not to like?

The town was built in districts charmingly named after the four seasons.  Ville d’Ete et de Printemps (Summer and Spring Town), of course, fronts the beach.  A beautiful sweep of fine white sand lined with low rise beachfront hotels, classic piers at either end and the quintessential seaside carousel, it seems little has changed in 170 years. 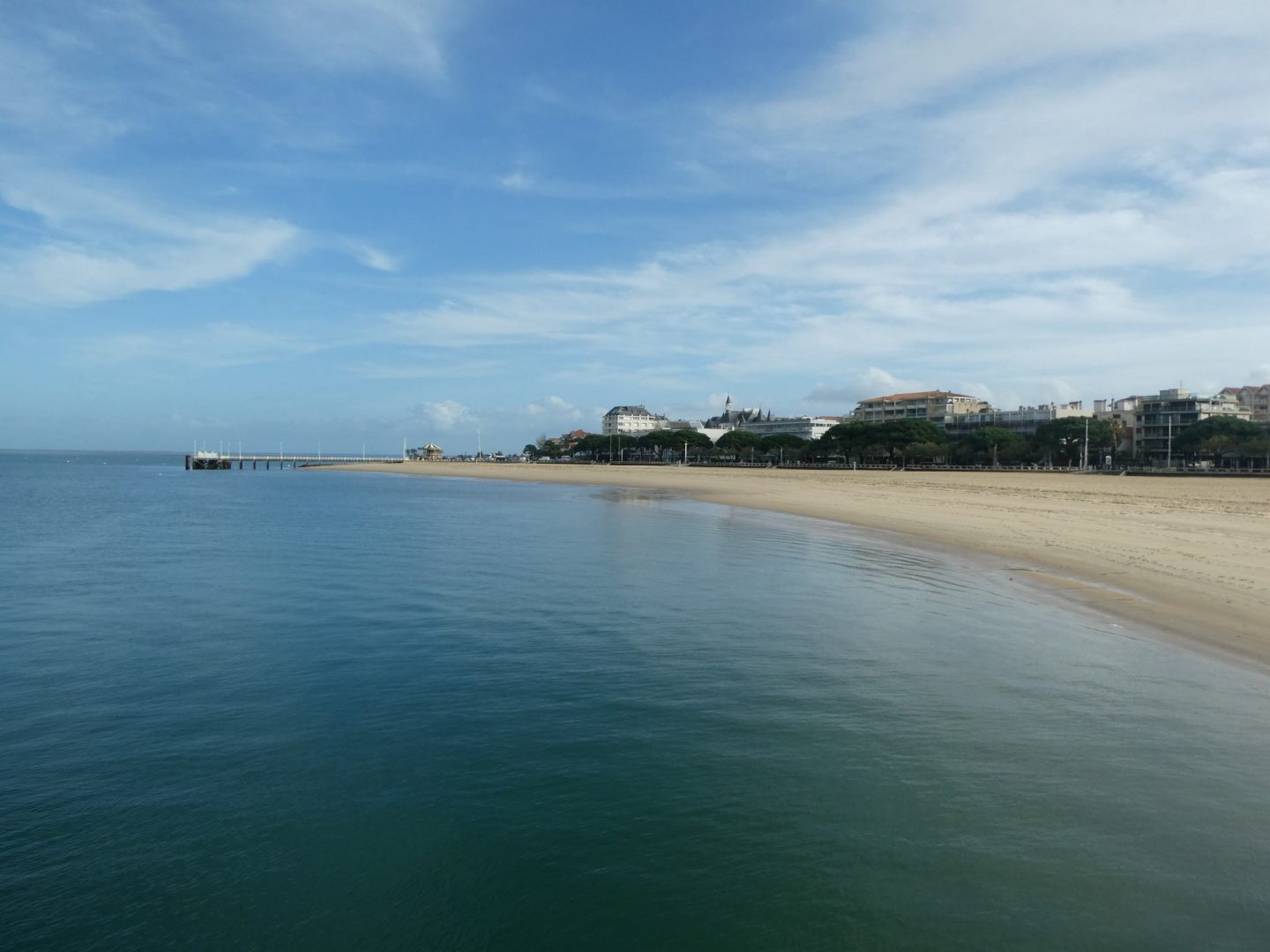 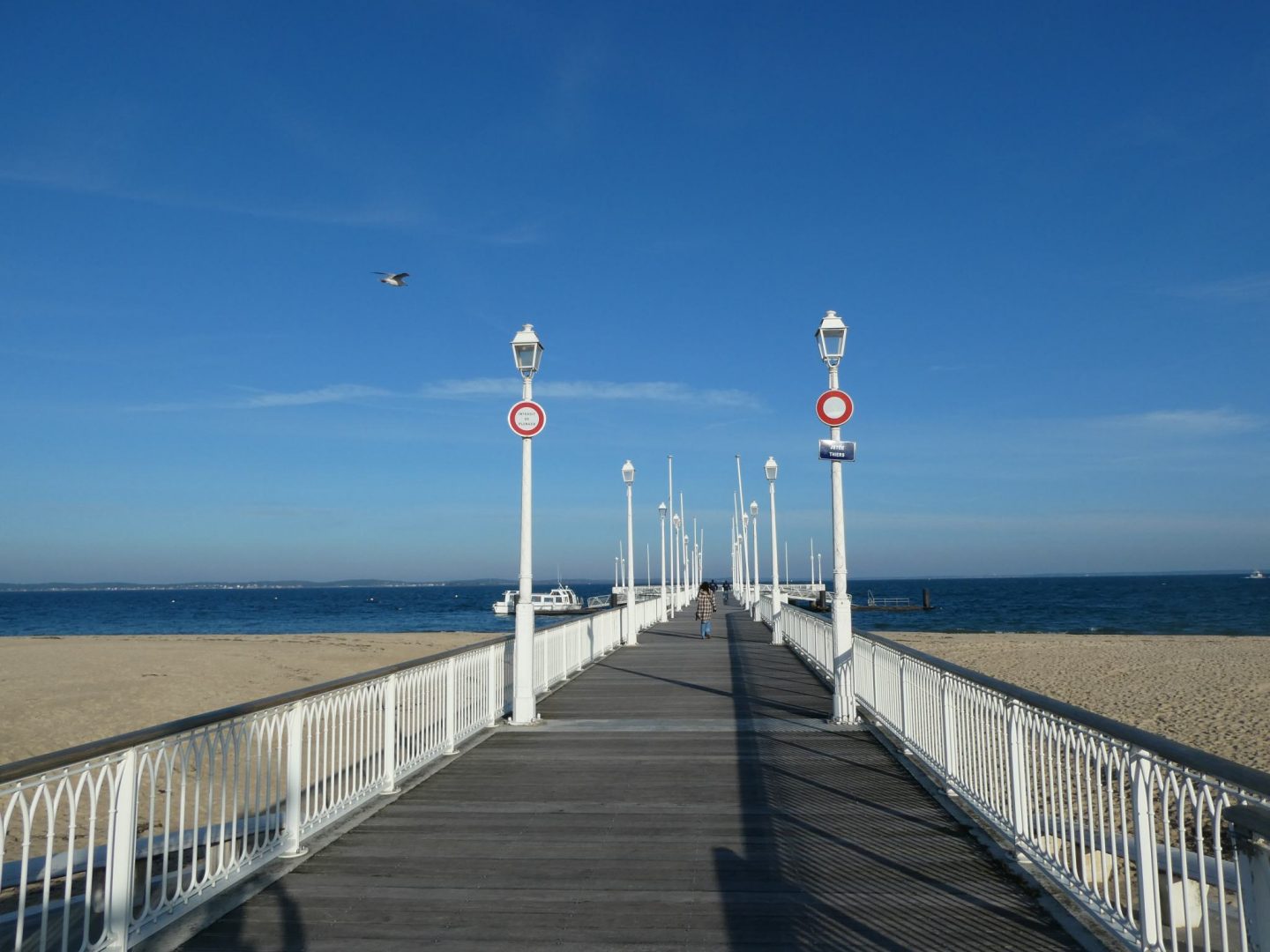 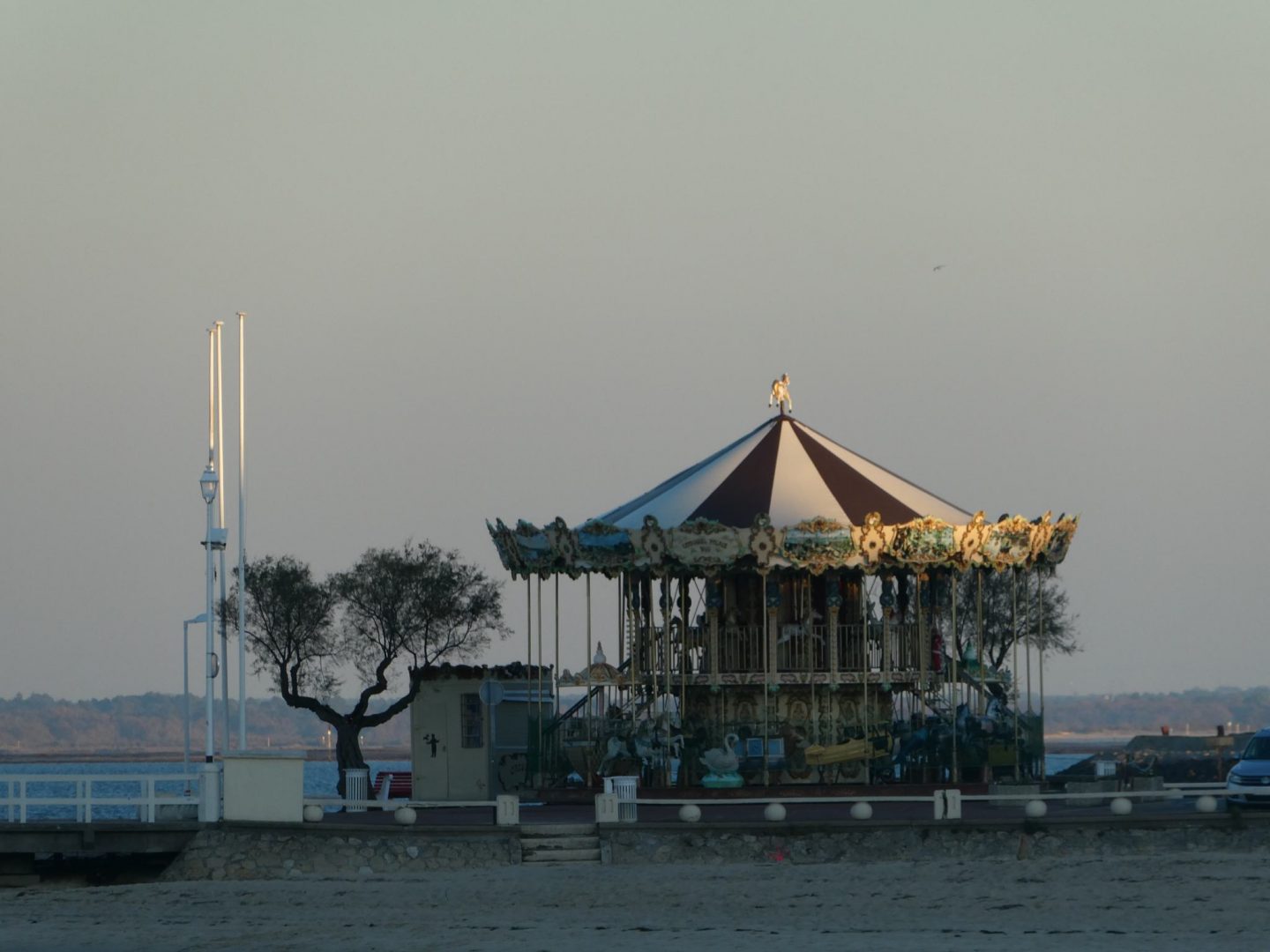 The leafy hillside behind is Ville d’Hiver (Winter Town), home to gracious villas on sprawling grounds, many still retaining their original grandeur.  They are so distinctive they have earned their own architectural designation – the ‘Arcachonnaise’. 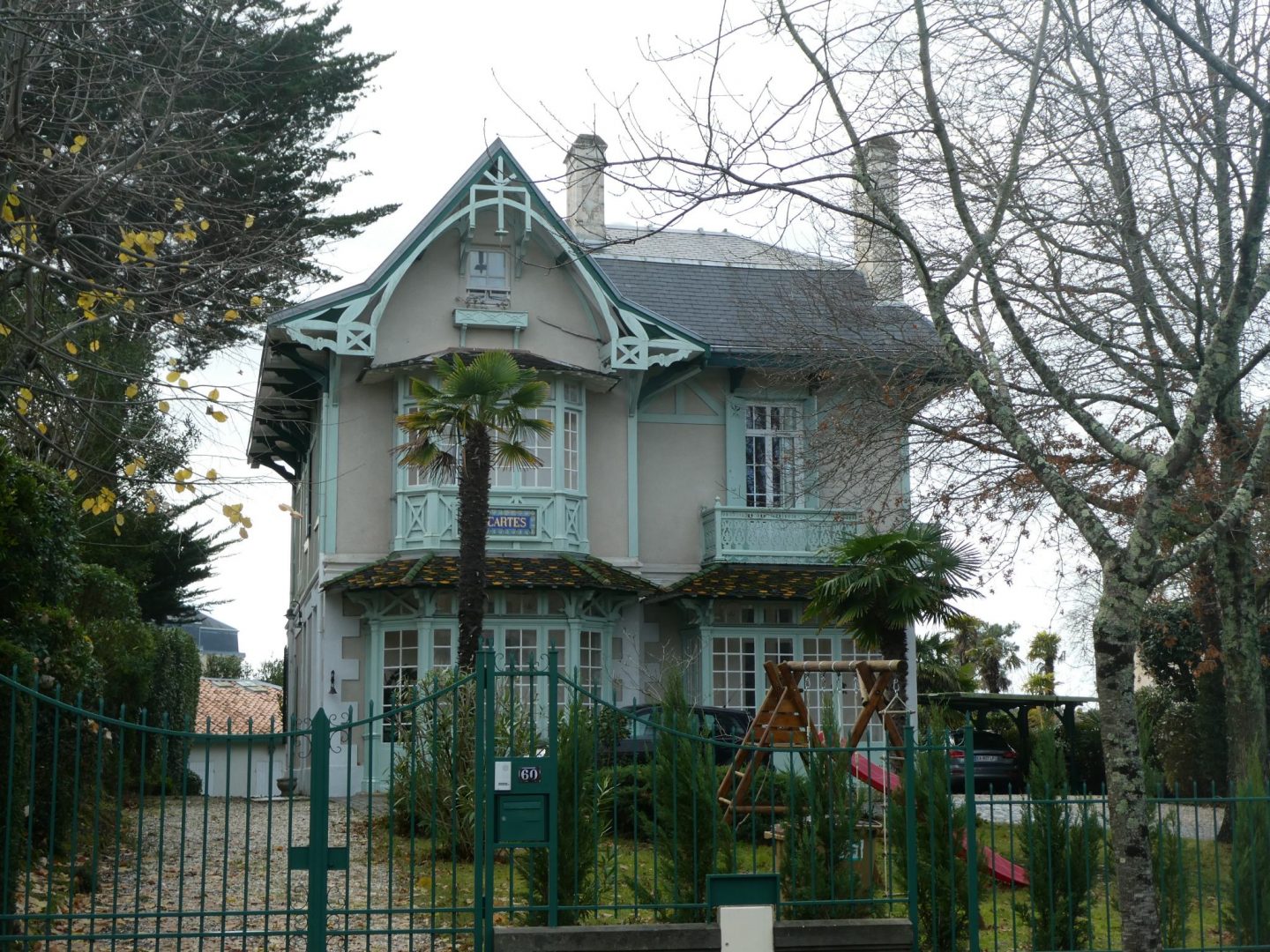 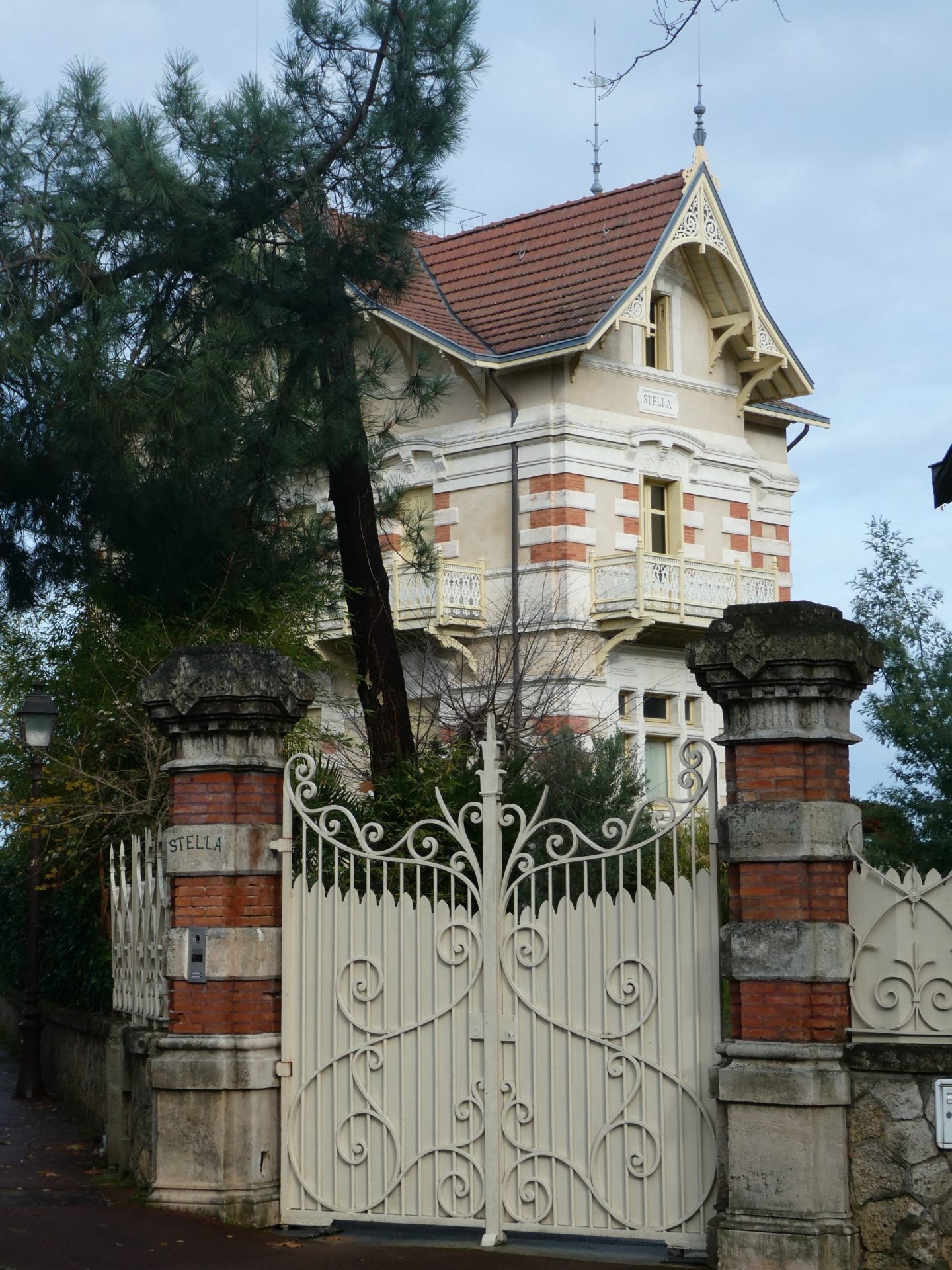 Some were built for rich folk suffering tuberculosis.  In the days before any effective medical treatment, it was believed that sea air was therapeutic.

Villa Teresa was once owned by the Sultan of Morocco. 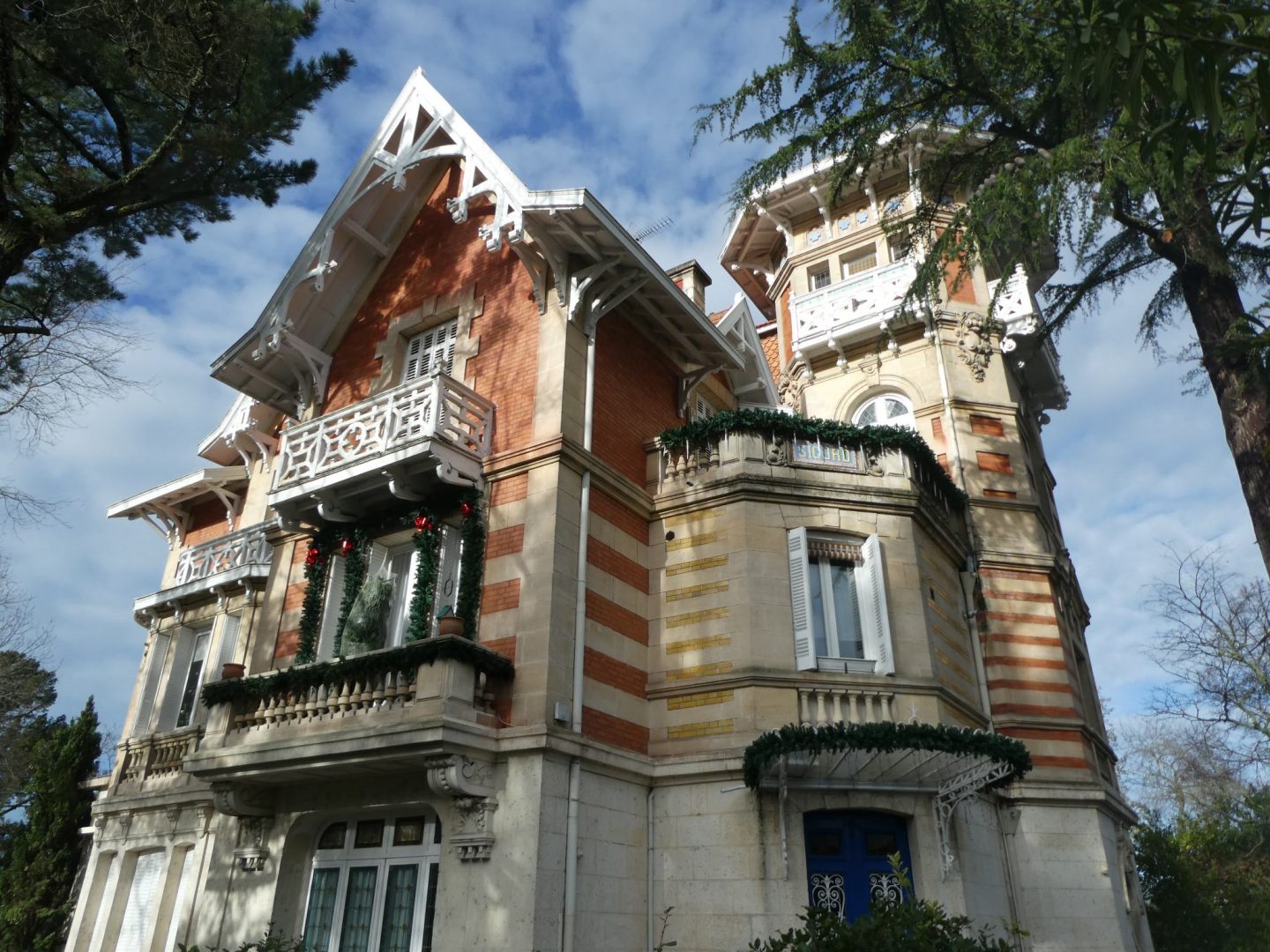 Alexander Dumas visited Arcachon in the summer of 1865 and although he never stayed in it, one of the quarter’s most beautiful houses, originally named Osiris, was renamed Villa Dumas in his honour. 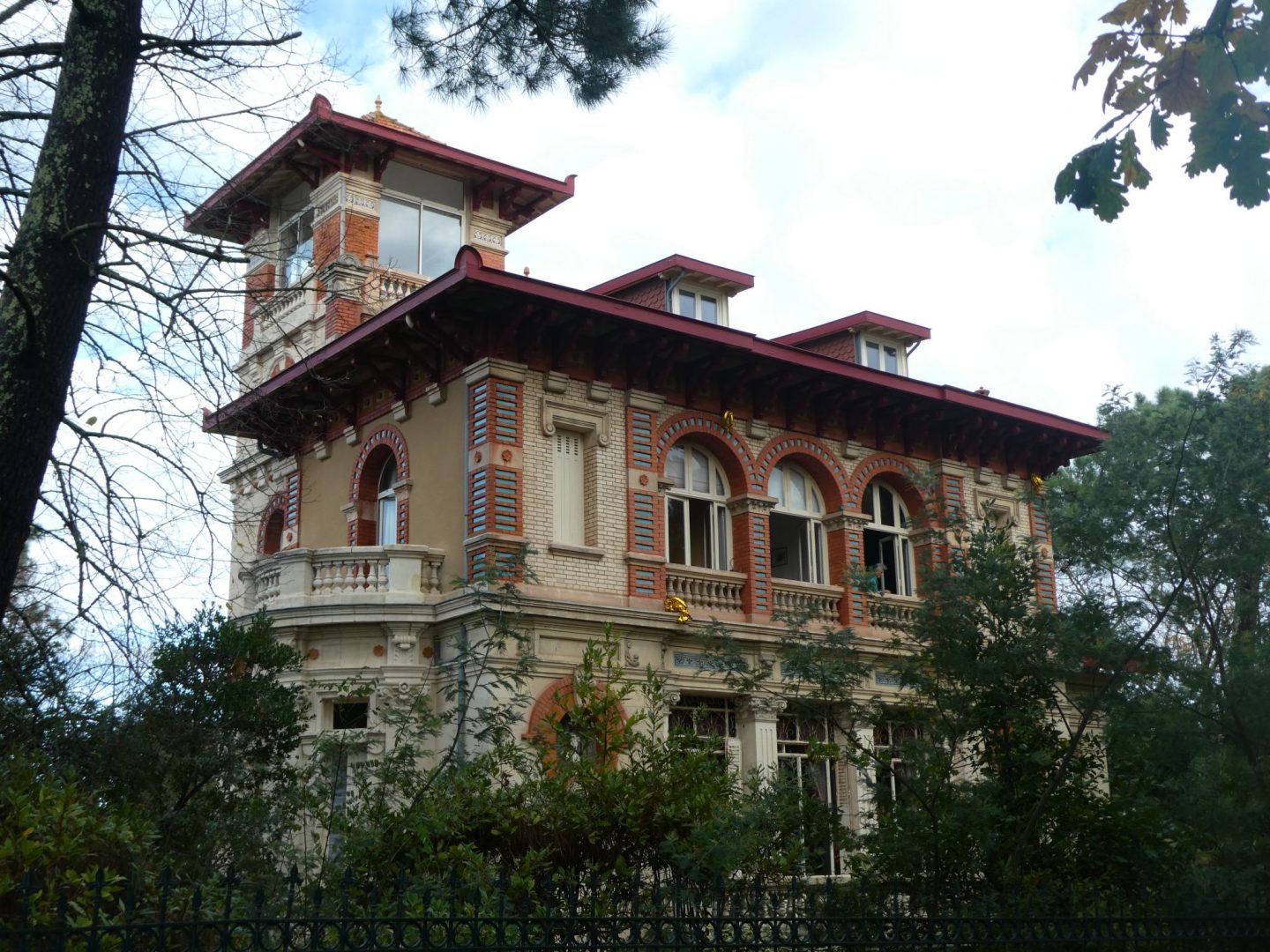 For a view over the bay from Ville d’Hiver, there’s a 25 metre high Saint-Cécile Observatory with a spiral staircase inside.  It’s an early design by none other than Gustave Eiffel, who went on to greater fame designing his eponymous Tower. 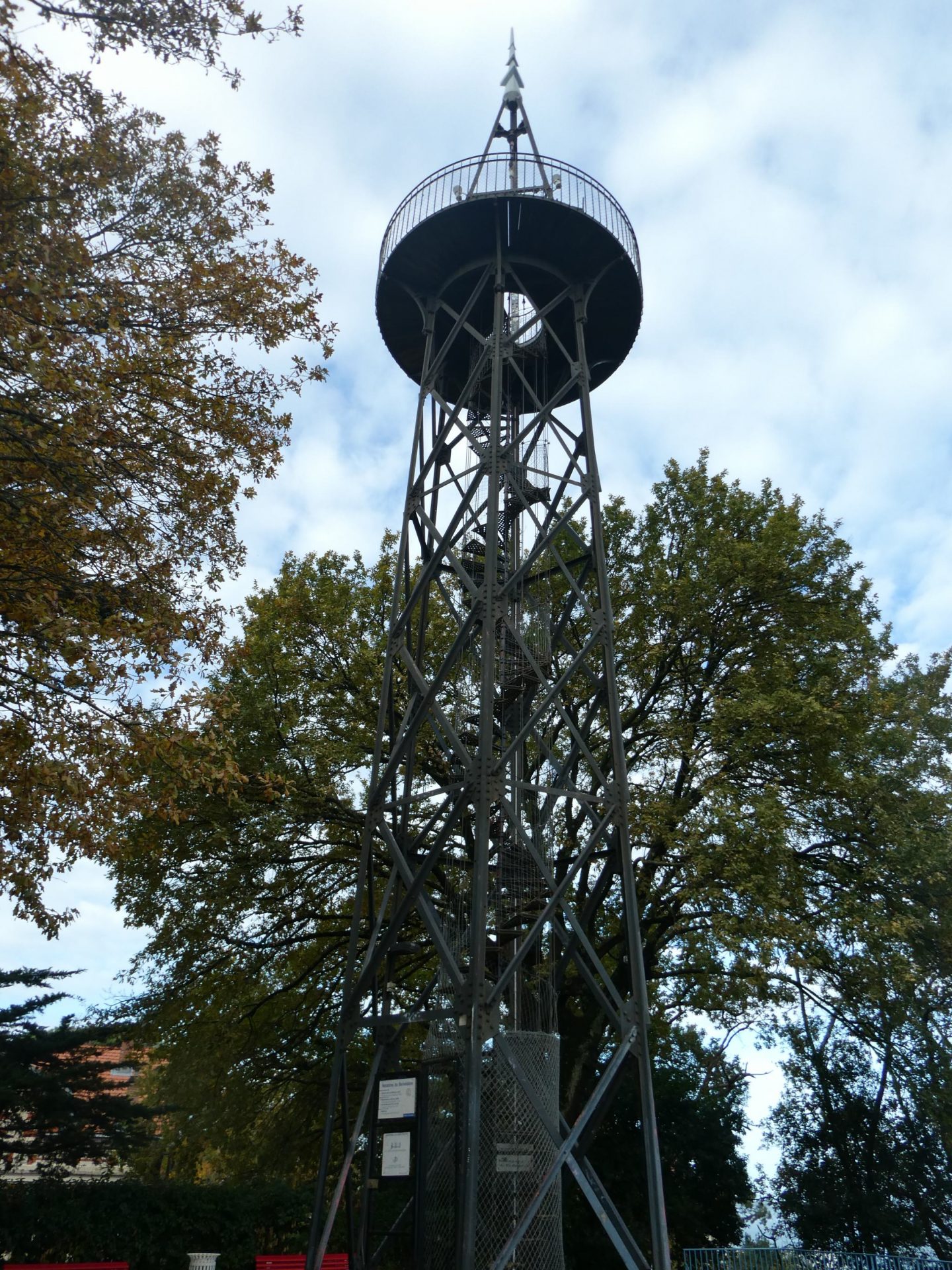 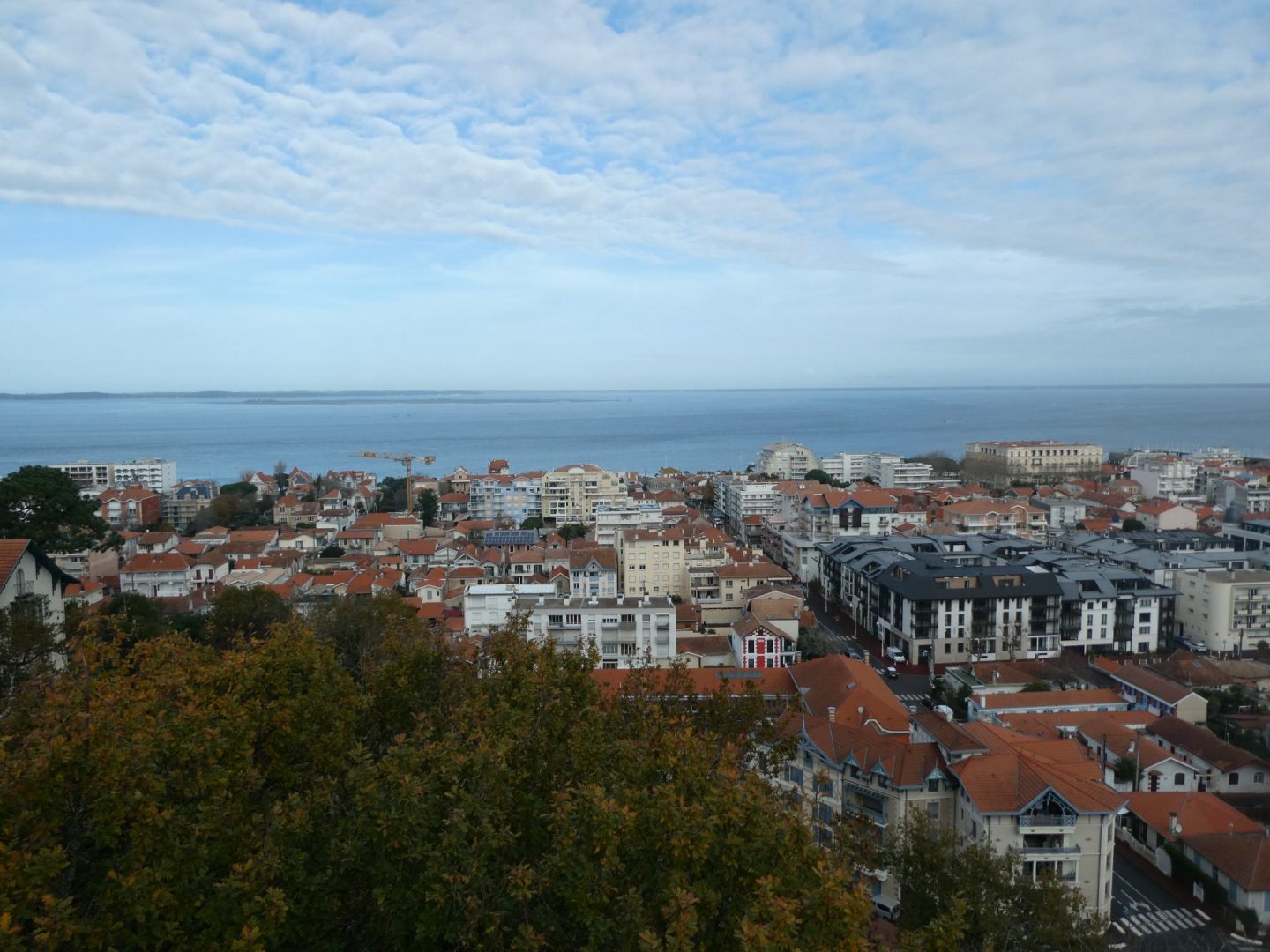 At the southern side of the entrance to the bay is the great sandy massif called Dune du Pilat.  A magnet for European tourists, but why?

280 metre high Mount Tempest on Moreton Island, Australia – practically in our back yard – is the highest coastal sand dune in the world.  Dune du Pilat is only 110 metres high, less than half the size.  So it may be a little underwhelming to Aussies, but it is the largest sand dune in Europe.  It’s almost 3km long, 500 metres wide and is moving inland at a rate of 5 metres per year.

Every summer a temporary staircase is built up one side so people can climb up and tumble or sand board down the dune. 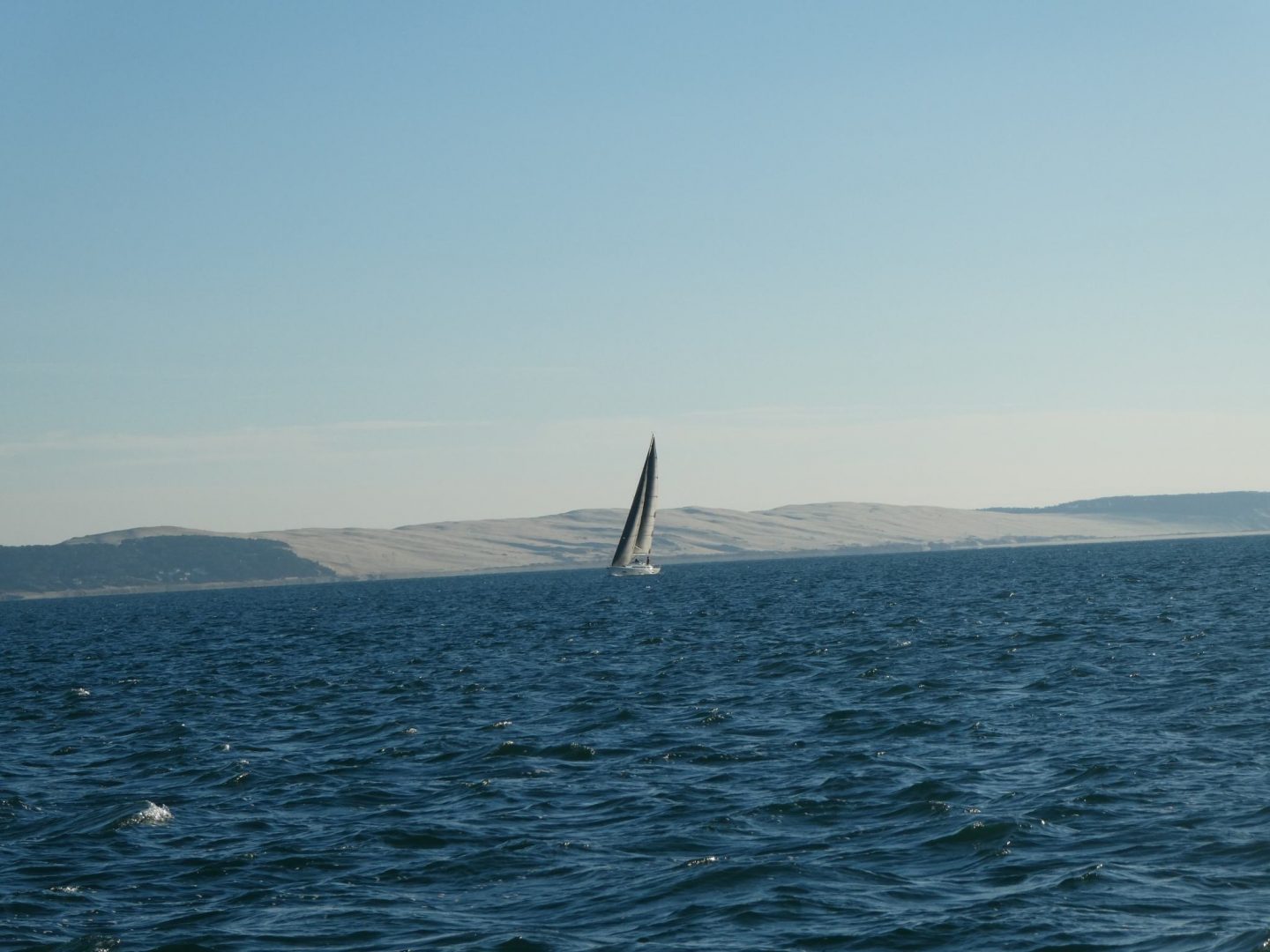 To the north and west, the slender Cap Ferret isthmus protects the bay from the wild Atlantic Ocean beyond.   You can drive from Arcachon around in an arc to Cap Ferret, which will take about two hours.  Or you can catch a ferry across in about 30 minutes.

Cap Ferret is an eclectic mix.  Upscale holiday homes and retirement enclaves for the well-heeled prevail, so there’s boutiques, coffee shops and good restaurants.  Conde Naste described it as ‘the Cote D’Azur without the bling and the desperate exhibitionism’. 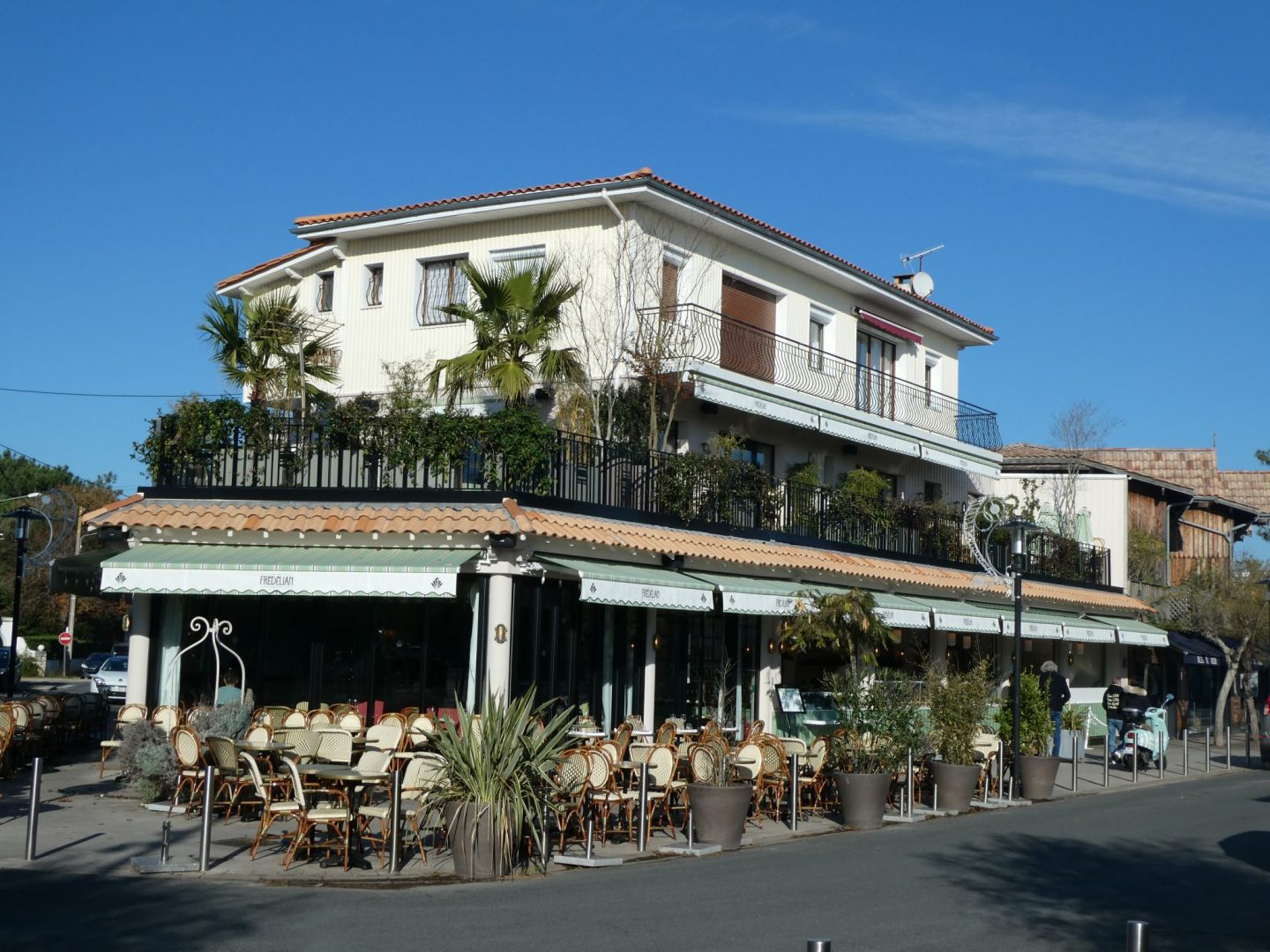 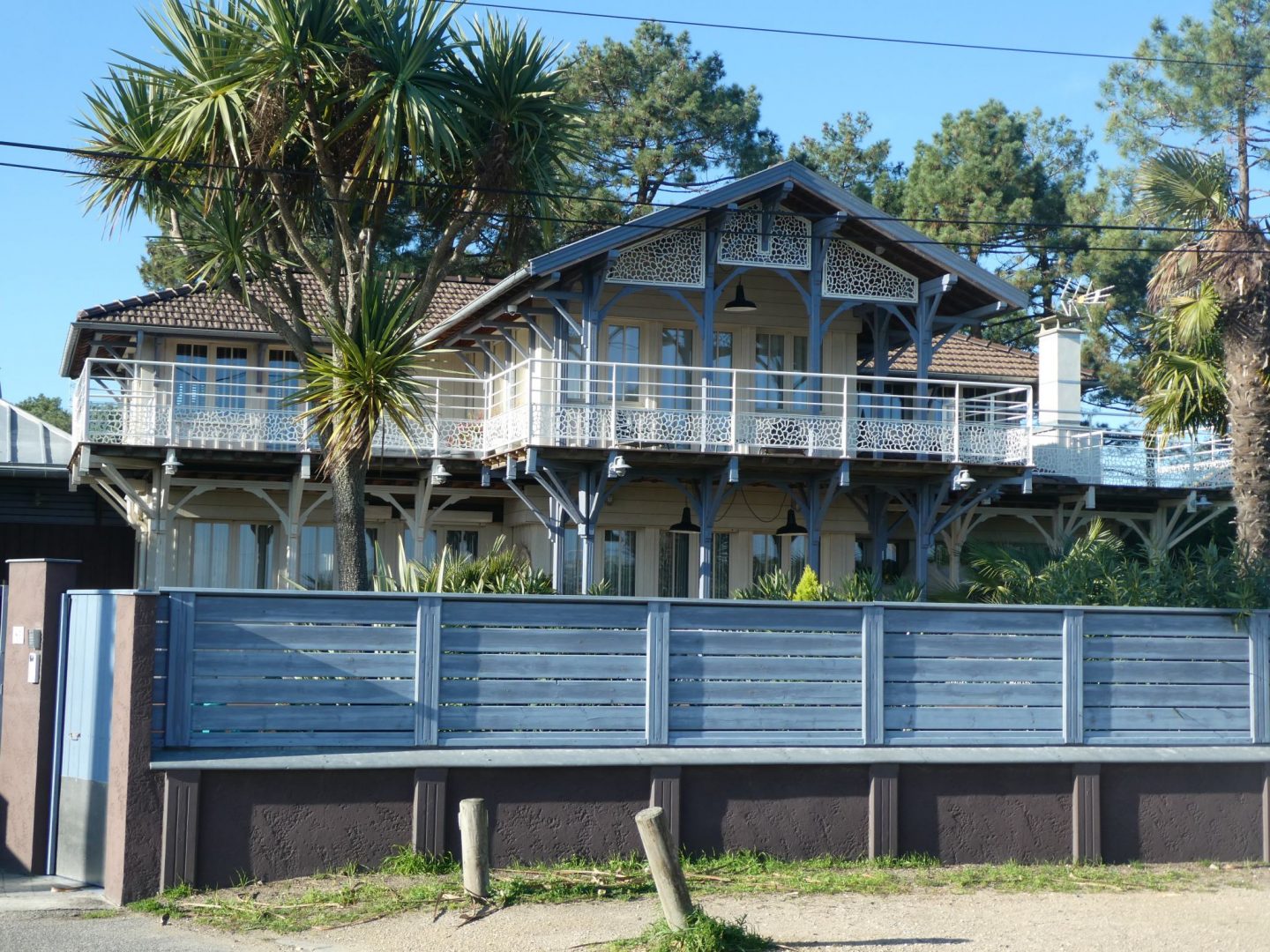 It’s perfect for ocean lovers.  There are wild surf beaches on the Atlantic Ocean side of the peninsula, while on the other side the calm waters of the bay are perfect for swimming and mooring recreational sailing boats. 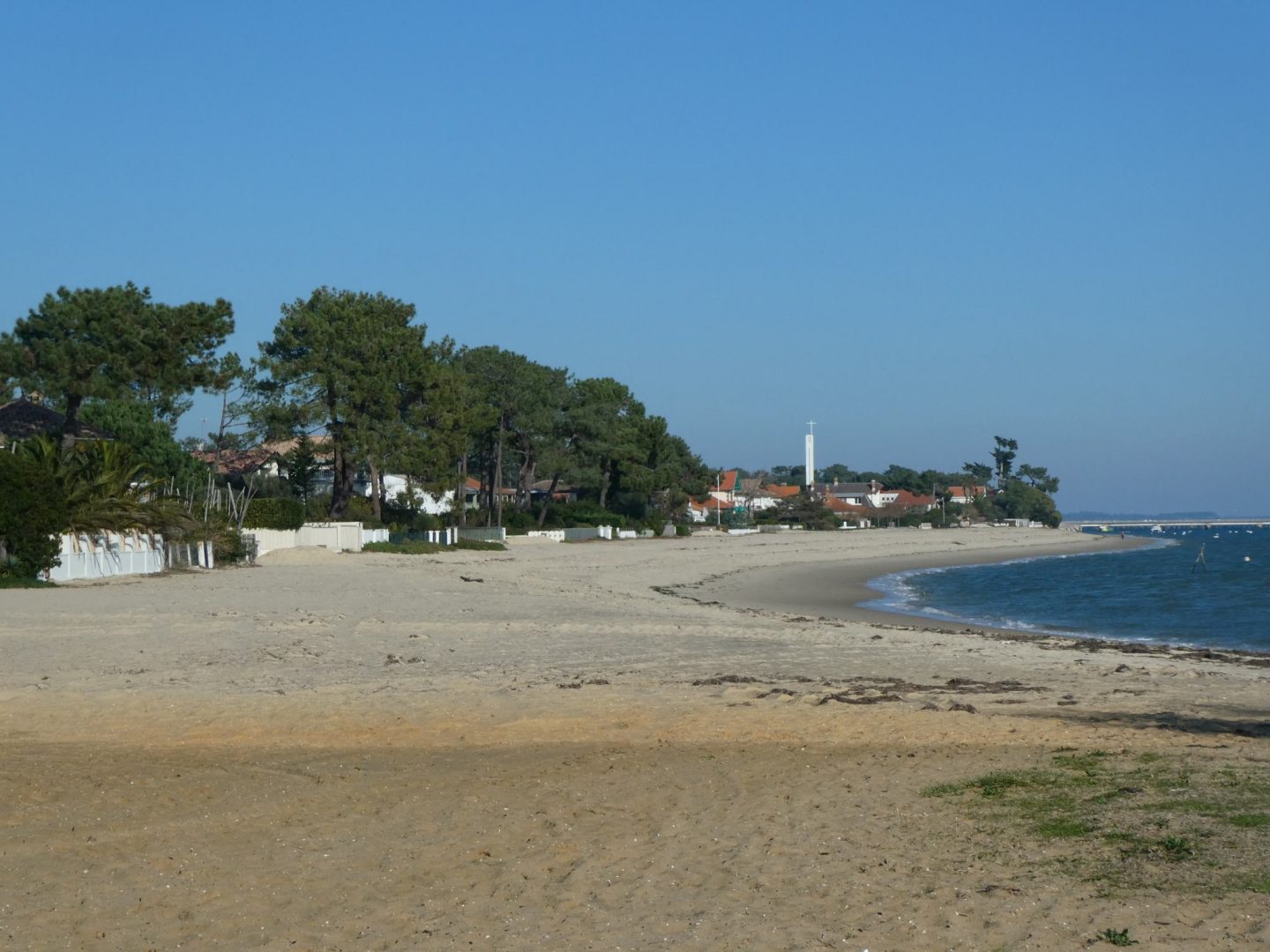 But it’s also very much a working place.  All along the bay shore are fishermen’s villages whose sandy lanes are lined with oyster harvesting equipment and tanks for oysters awaiting sales. 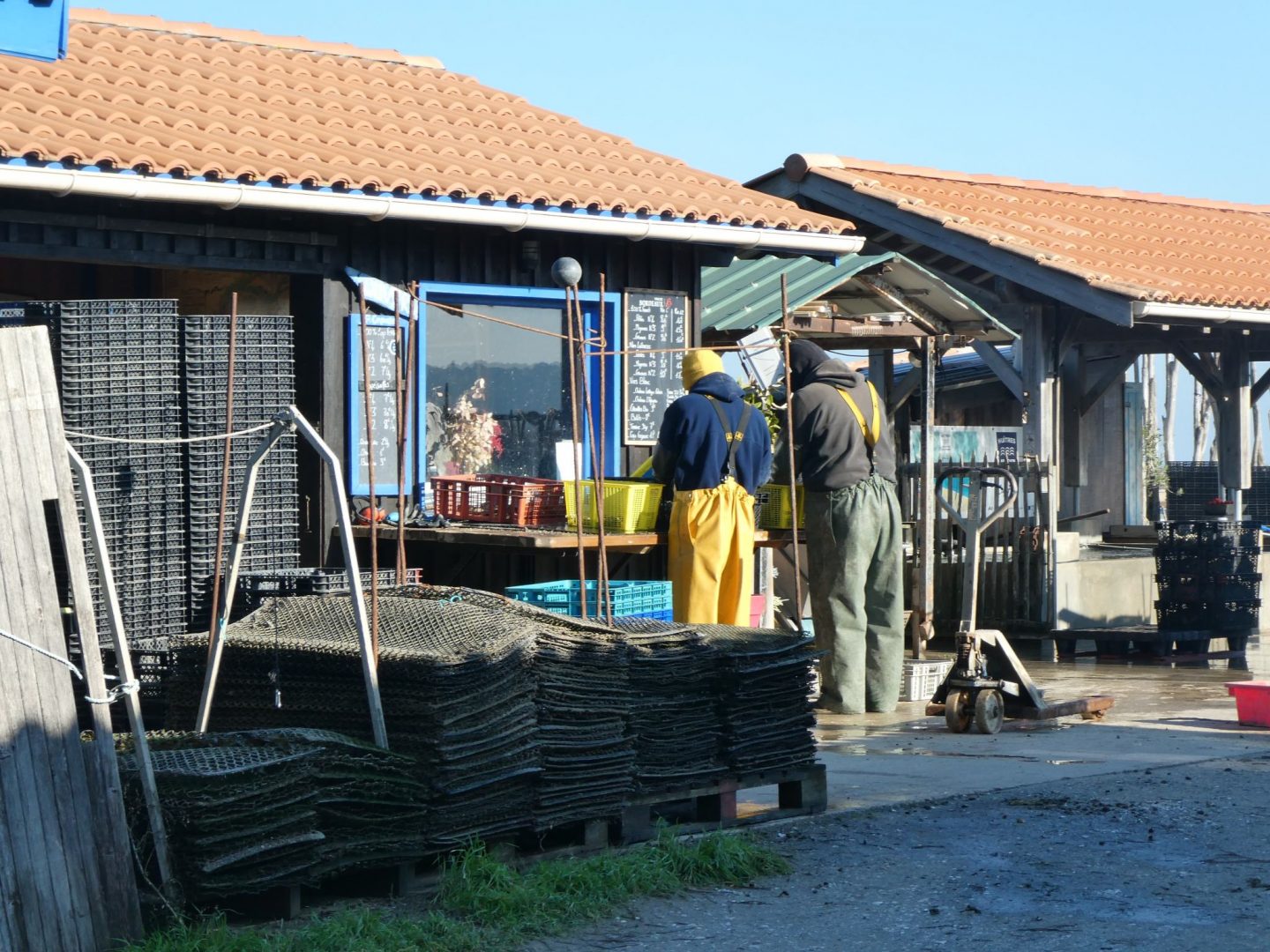 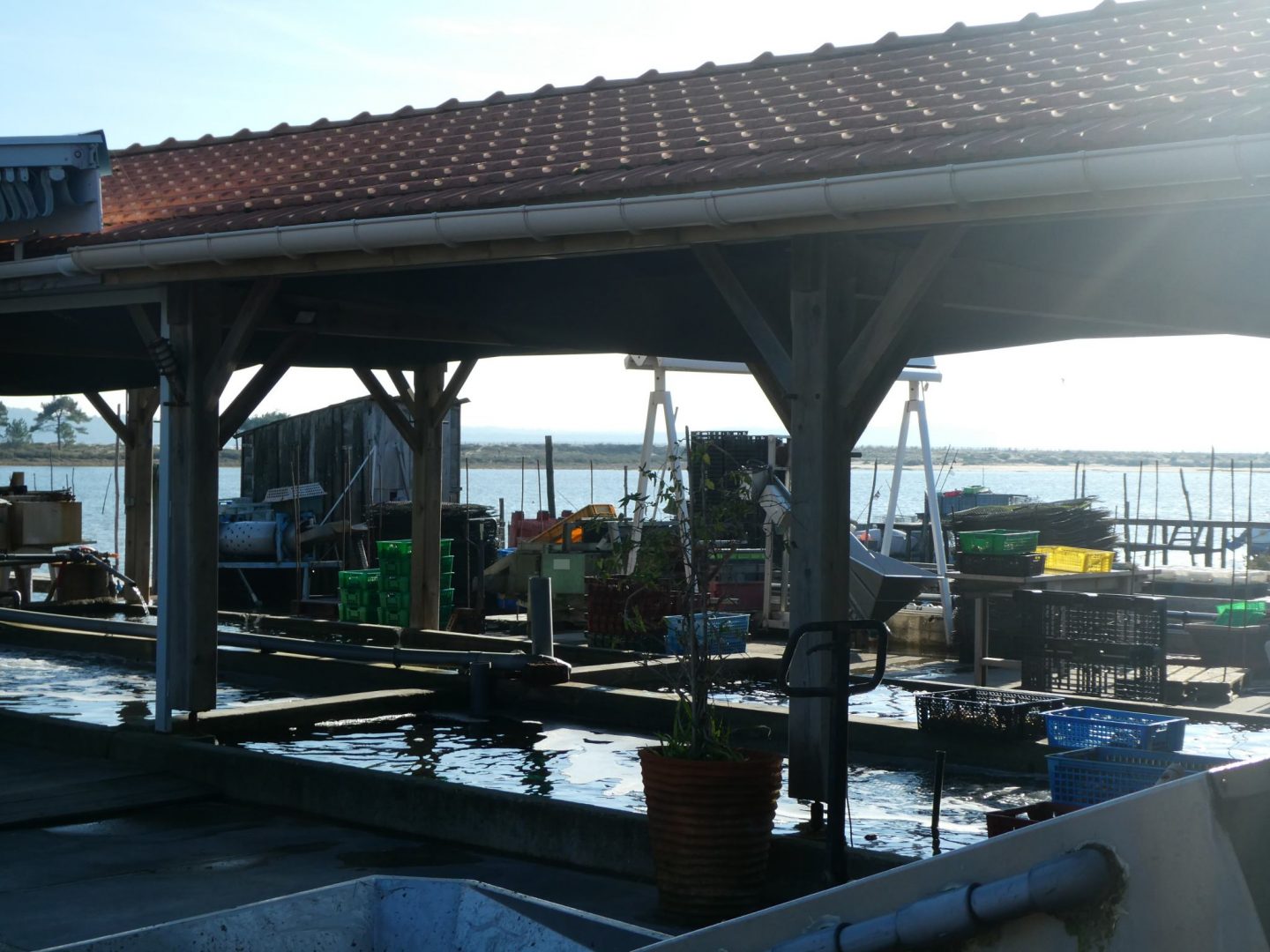 Many oyster farmers have huts open to the public where you can buy a dozen shucked to order and sit with a glass of wine gazing at the bay. 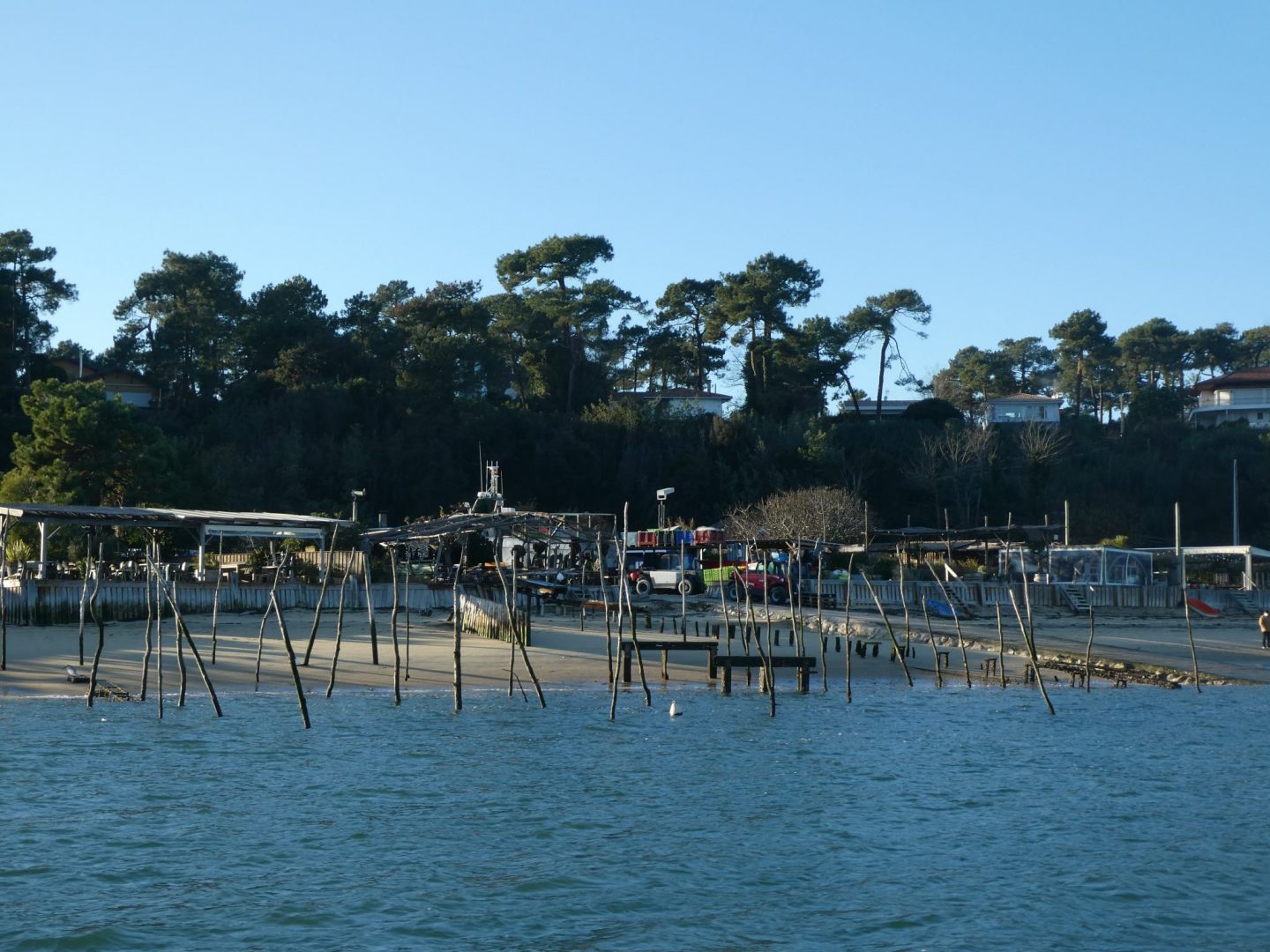 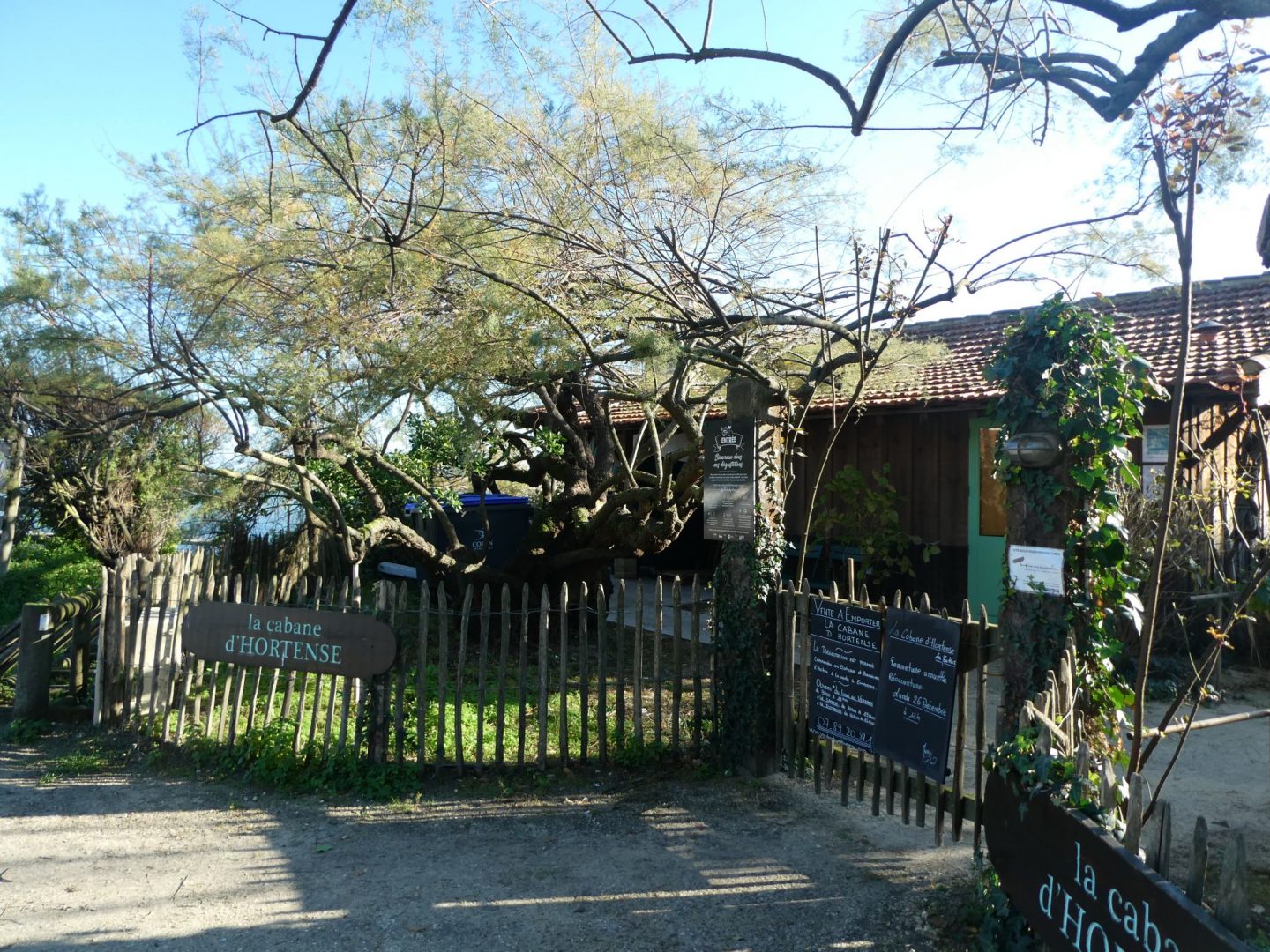 If you are feeling energetic you can walk to Cap Ferret lighthouse.  Unlike most, it’s not on a cliff.  It’s just a marker to let ships know there’s a long lick of land here. 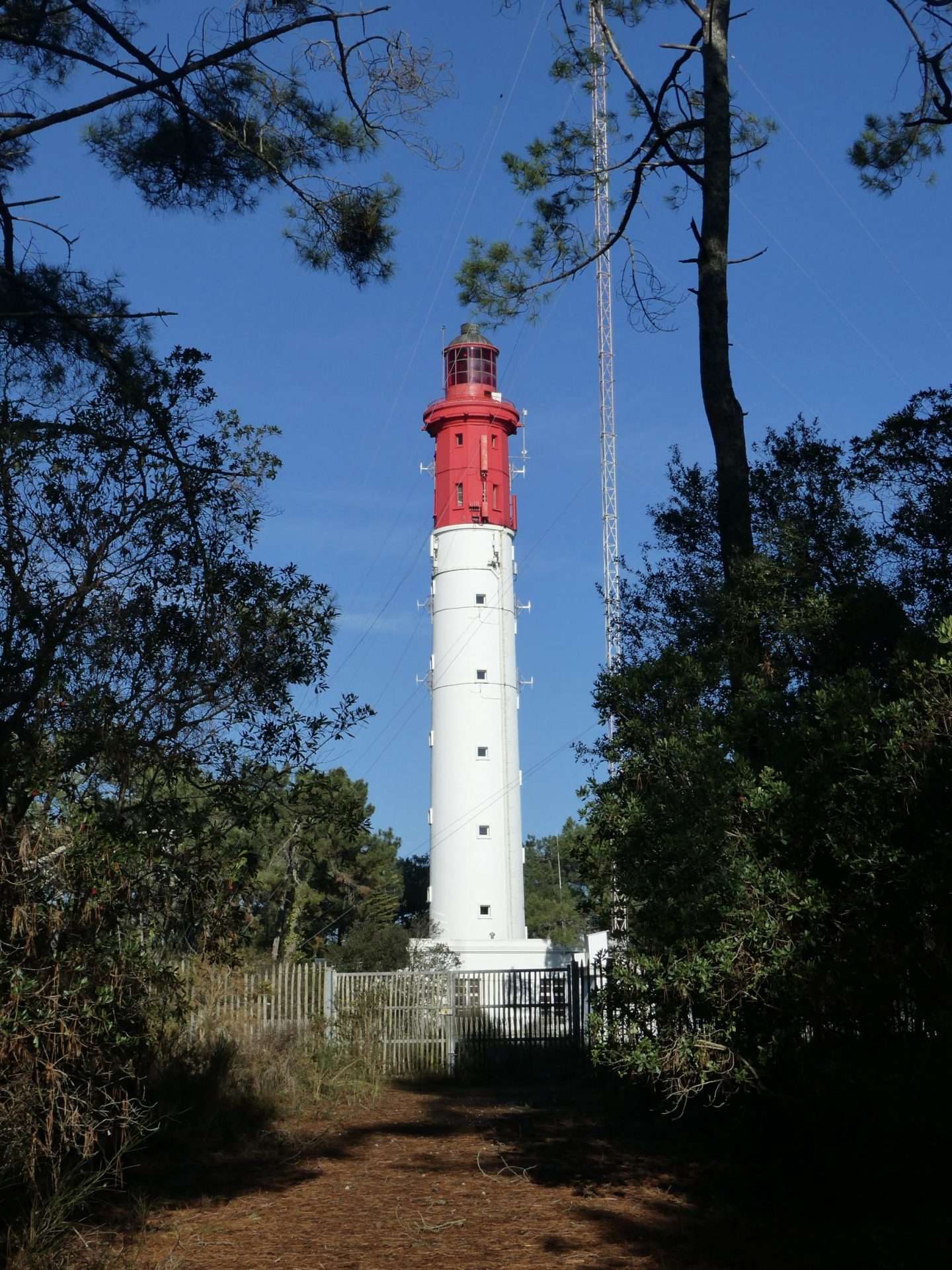 And inside the bay, the calm waters are home to 175 hectares of oyster beds.  We took a boat tour from Arcachon which meandered down the isthmus past the oyster farming villages. 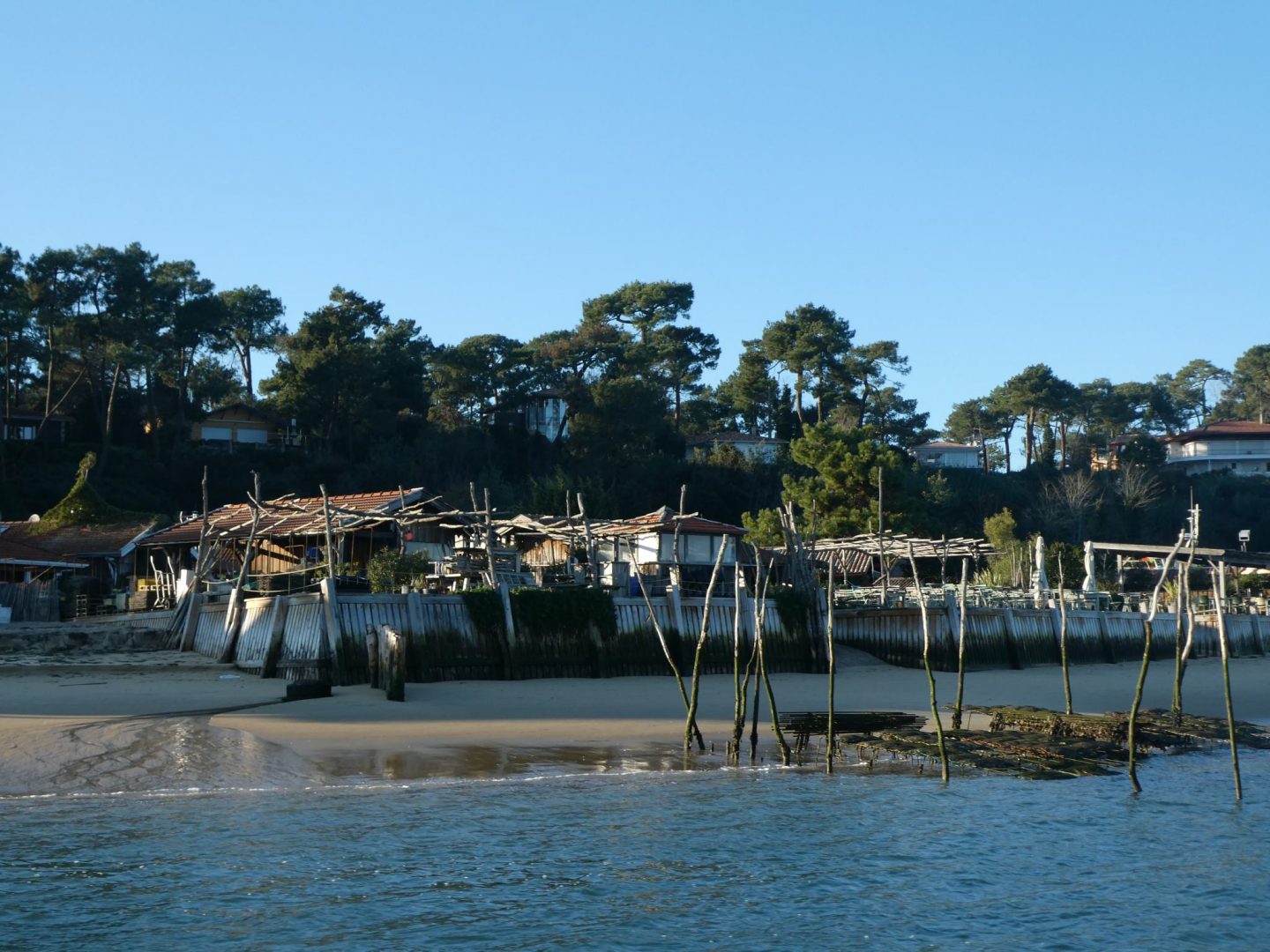 We passed by the Chapel of the Algerian Villa, built in 1885 by a local man who’d returned from Algeria with more than a little spare cash.  He also built fish tanks and oyster beds, planted a vineyard, built a dozen houses for his staff, a school, a pier and a presbytery.  The chapel is what remains of his mini empire and today it’s owned by the city and maintained as an historic monument. 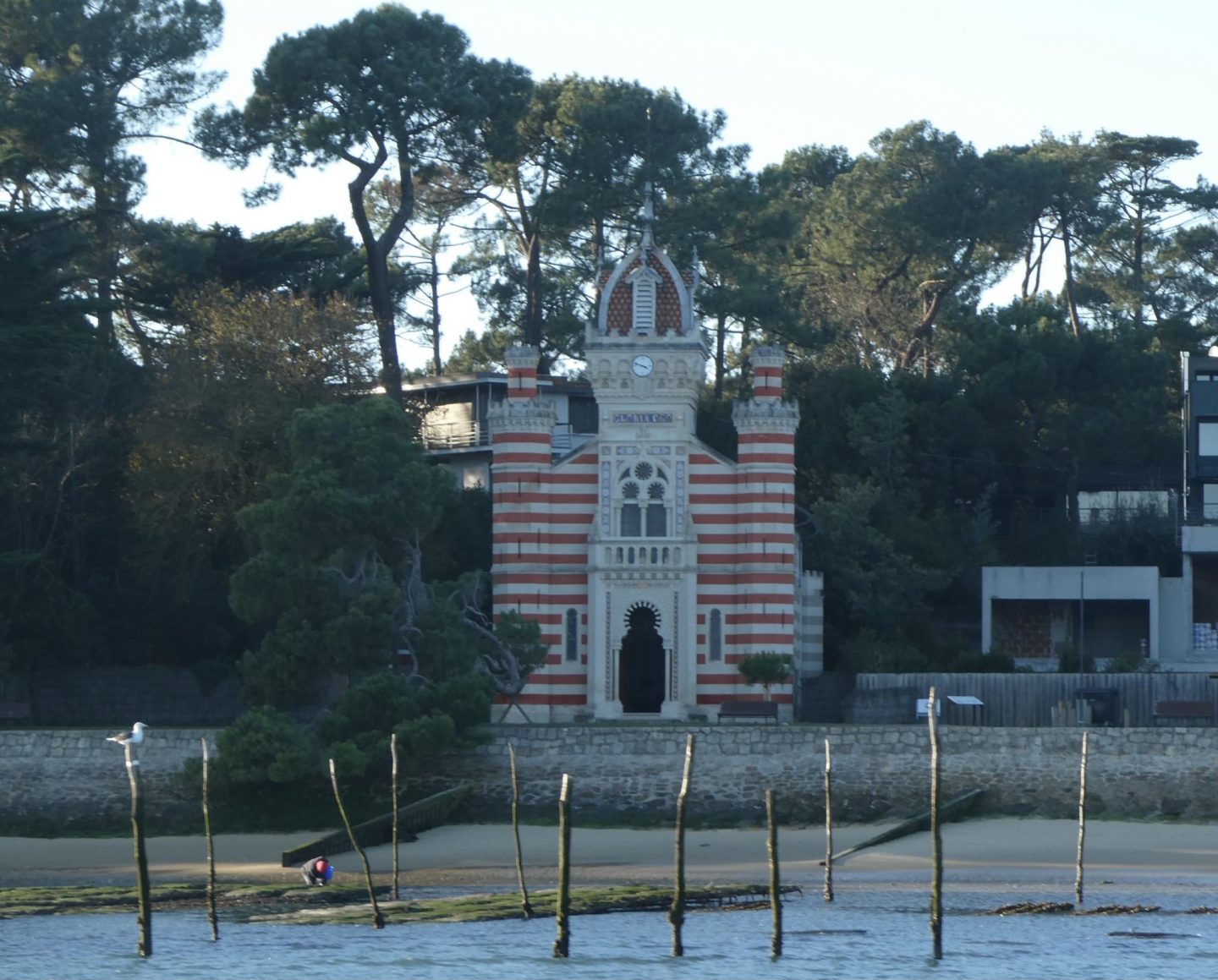 The boat then headed into the centre of the bay for a view of Ile aux Oiseaux (Bird Island).  This little island is home to 150 different species of birds and is protected as a nature sanctuary.  It is the only salt meadow on the Atlantic Coast never to have been farmed or even occupied by humans.  Except for two cabins on stilts perched on the edge.

At low tide, their foundations are exposed.  At high tide, they look like they are suspended in the sea.  The Cabins Tchanquees were built to allow oversight of the oyster beds.  They’re no longer used for that, and indeed one is a replica constructed after the original was destroyed in a storm.  They have become one of the most iconic and recognisable symbols of the Arcachon Basin. 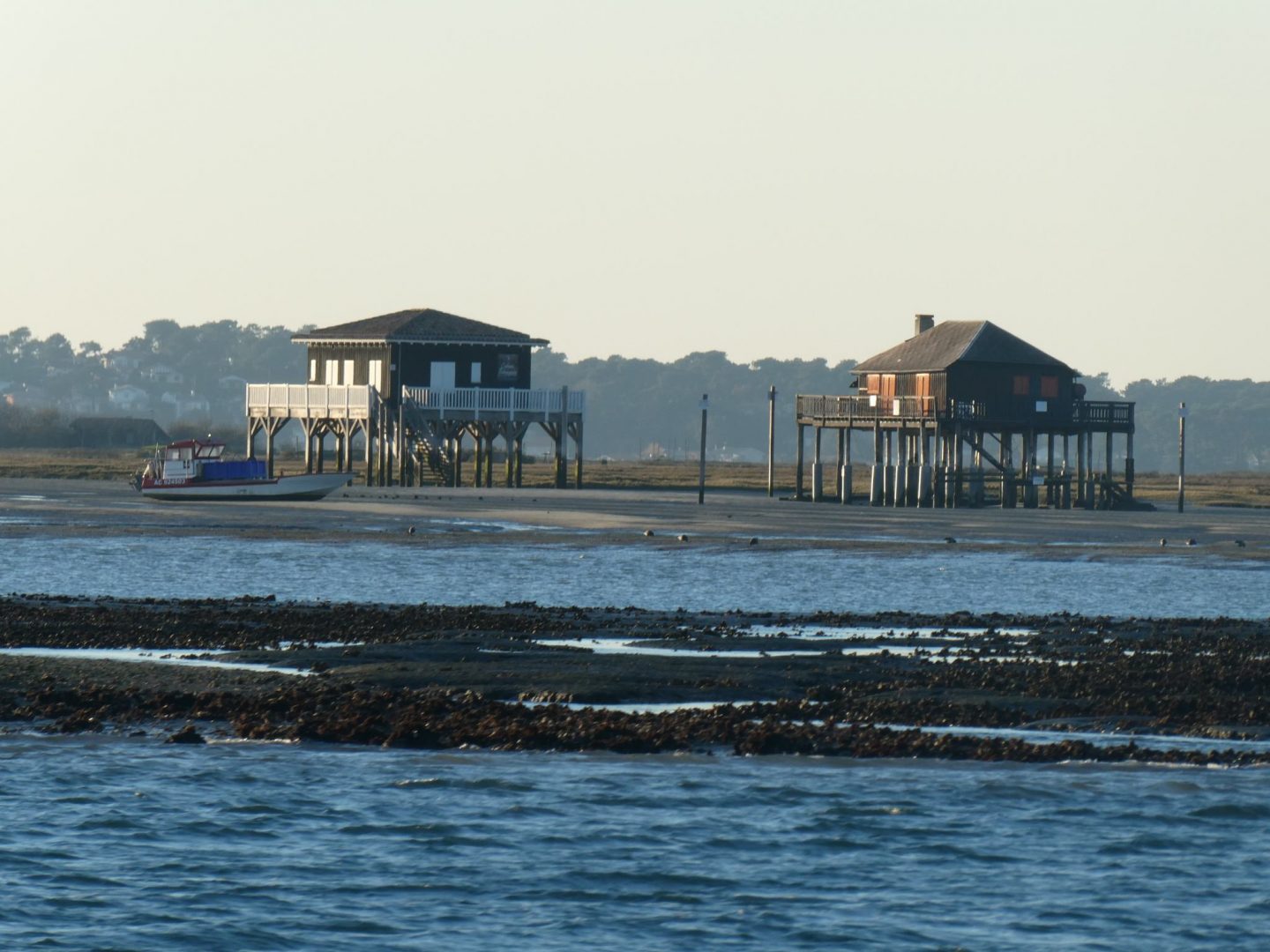 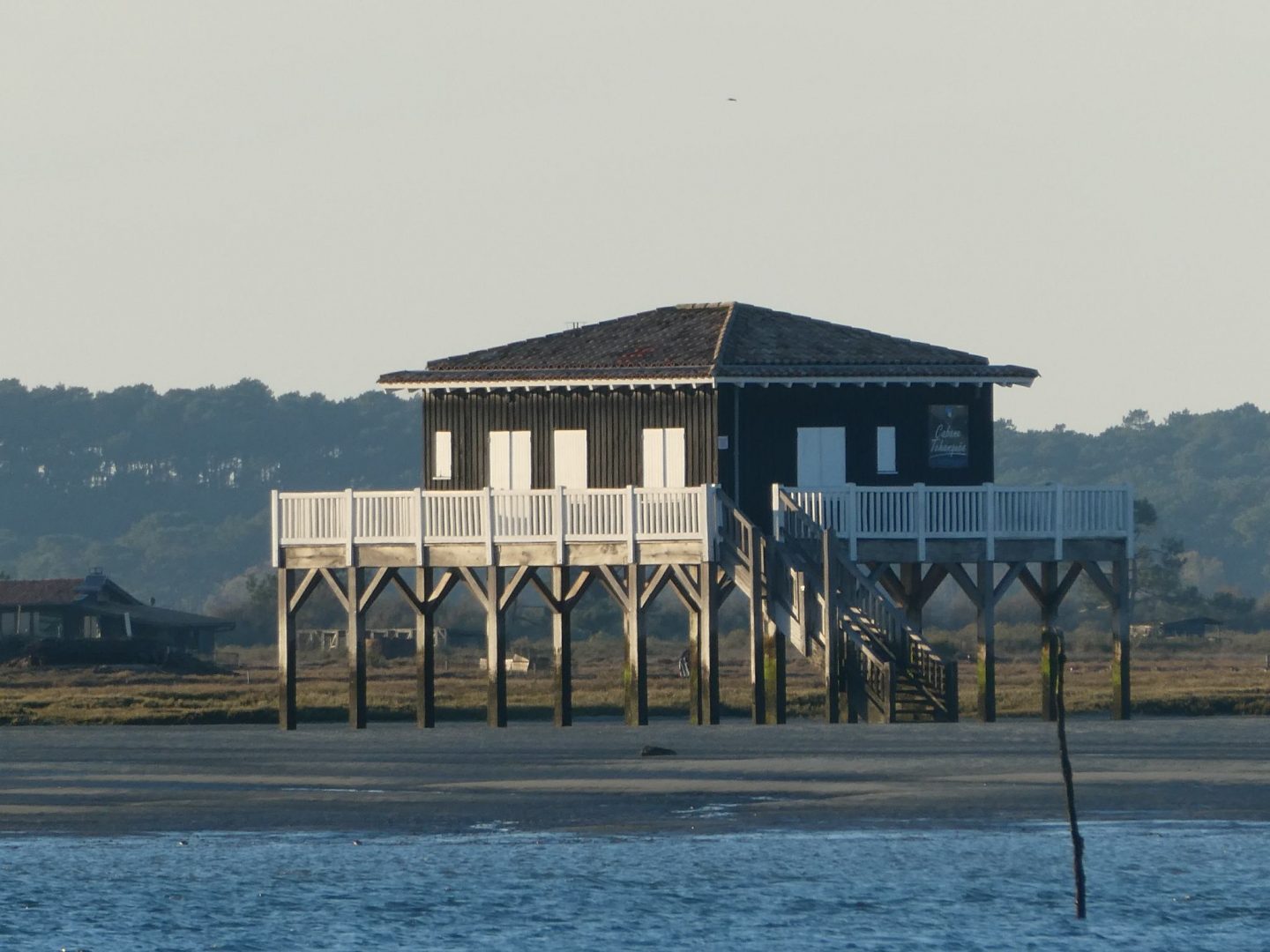 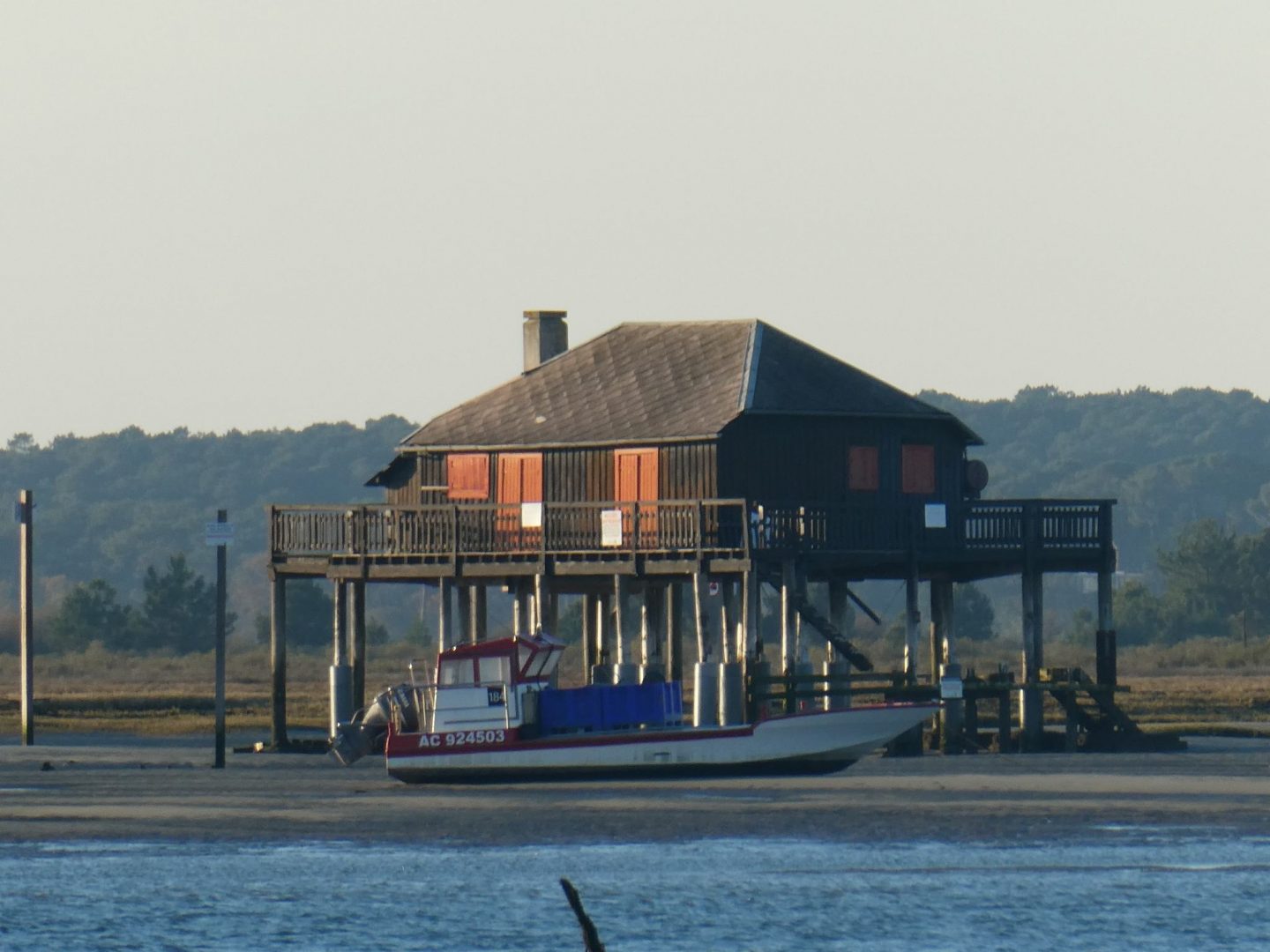 Arcachon and Cap Ferret get crazily busy in summer.  It’s easy to see why.  But being here on the verge of winter was really nice.  Most places were still open and there were no crowds to battle.  Except for swimming being totally out of the question, it’s actually a good time to visit.