On the banks of the Loire River, 50km inland from the Atlantic Coast, Nantes was once the seat of power of the Dukes of Brittany.  From here they ruled their lands and feuded with France for a couple of hundred years.

As such Nantes had, of course, a ducal palace.  The current Chateau des Ducs de Bretagne was built in the late 15th century by Francois II, the last Duke of Brittany, as a military fortress against the French and principal residence of the ducal court.  It wasn’t needed as a fortress for long – his daughter Anne married Charles VIII of France, effectively ending hostilities between the two powers.  And once Brittany was absorbed into France, it became the residence of the kings of France when they visited the region.

Both interior and exterior have been magnificently restored.  It’s one of the few castles we’ve seen where the moat is filled with water. 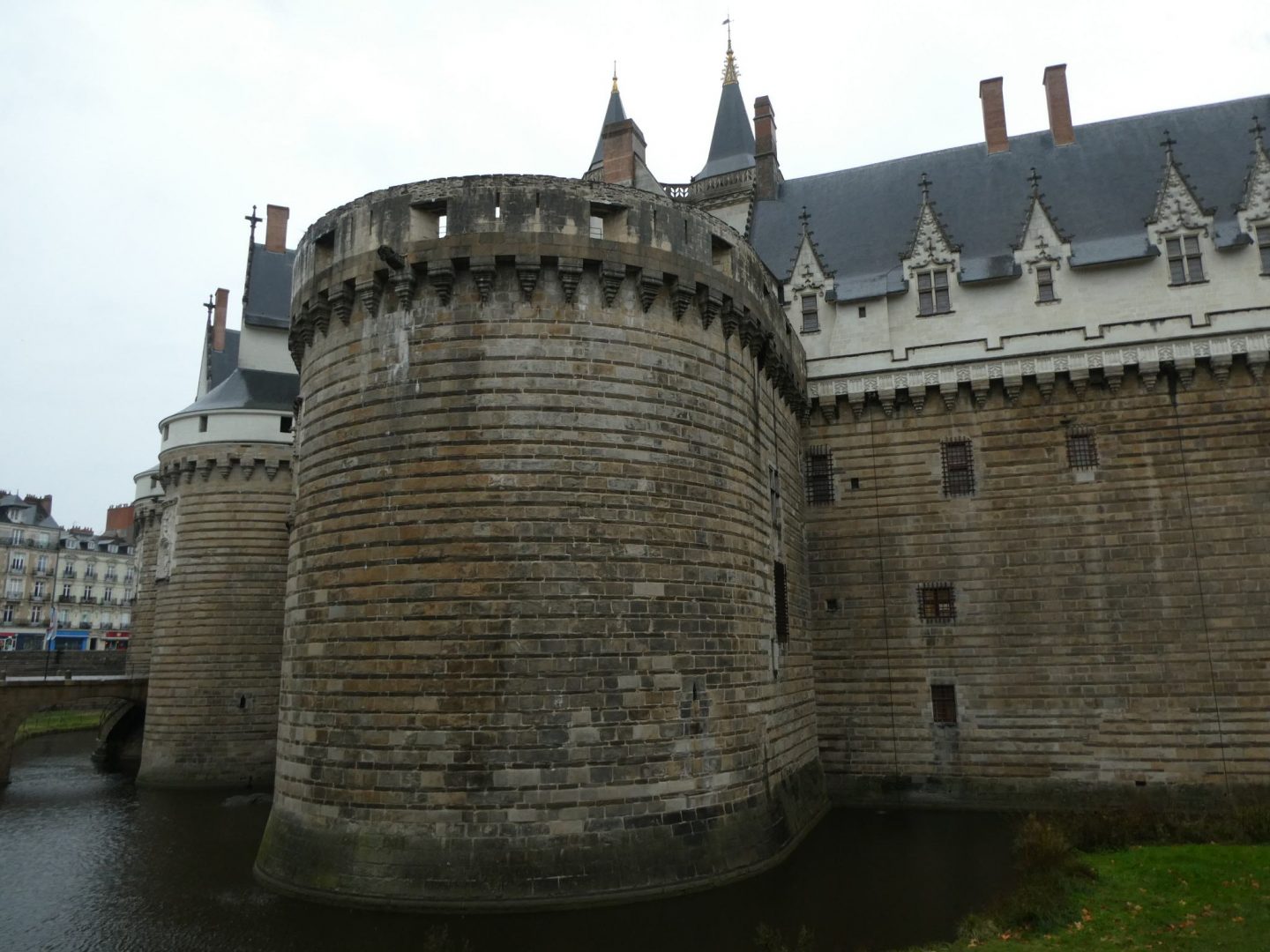 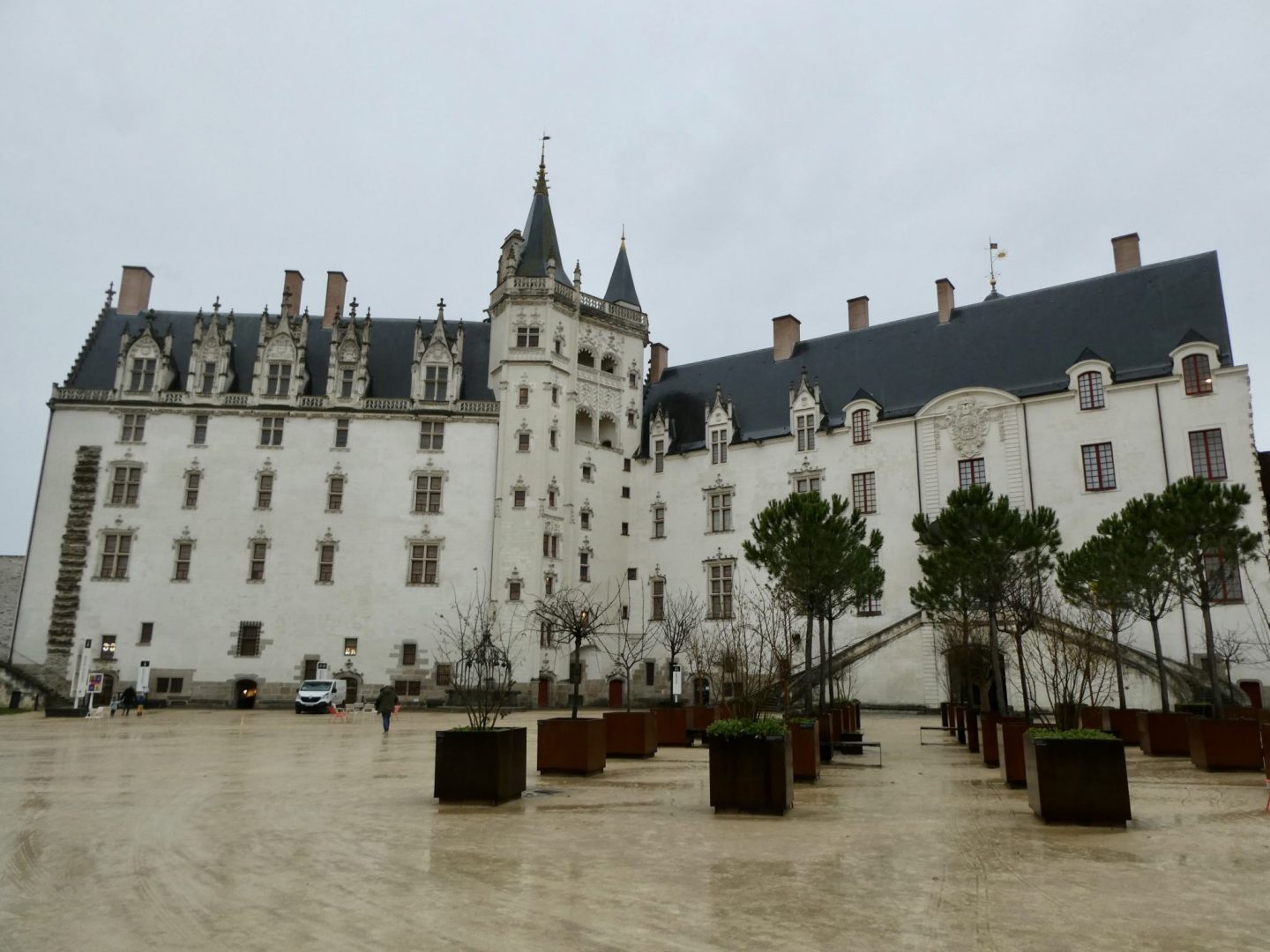 Within the complex there’s what we’ve read is a cutting edge museum about the history of the region and, of particular interest for us, its involvement in the slave trade.  But we left it to our last day to visit not realising it’s closed on Mondays, so we missed it.

Fortunately the Memorial de l’Abolition de l’Esclavage (Memorial to the Abolition of Slavery) down on the river fills in some gaps.

Over 27,000 slave trading expeditions are recorded to have left Europe between the 15th and 19th centuries.  In total over 12.5 million men, women and children were taken from Africa to the Americas and the Caribbean. More than 1.5 million died before even reaching their destination.

Around 1,800 of those ships left from Nantes, accounting for 550,000 people transported to the New World and a life of misery and servitude, mainly in the West Indies.   Glass bricks along the quayside next to the memorial bear the names of the slave ships.

And underground there’s a 90 metre long dark passage evoking the hold of a slave ship.  The history of slavery and the timeline of countries abolishing it are displayed.  Shockingly, the practice remained legal in a bunch of nations until well into the 20th century, with Mauritania becoming the last in the world to abolish it in 1981.  There’s moving quotes from prominent abolitionists and at the end of the memorial, the Universal Declaration of Human Rights is etched in glass in 47 languages. 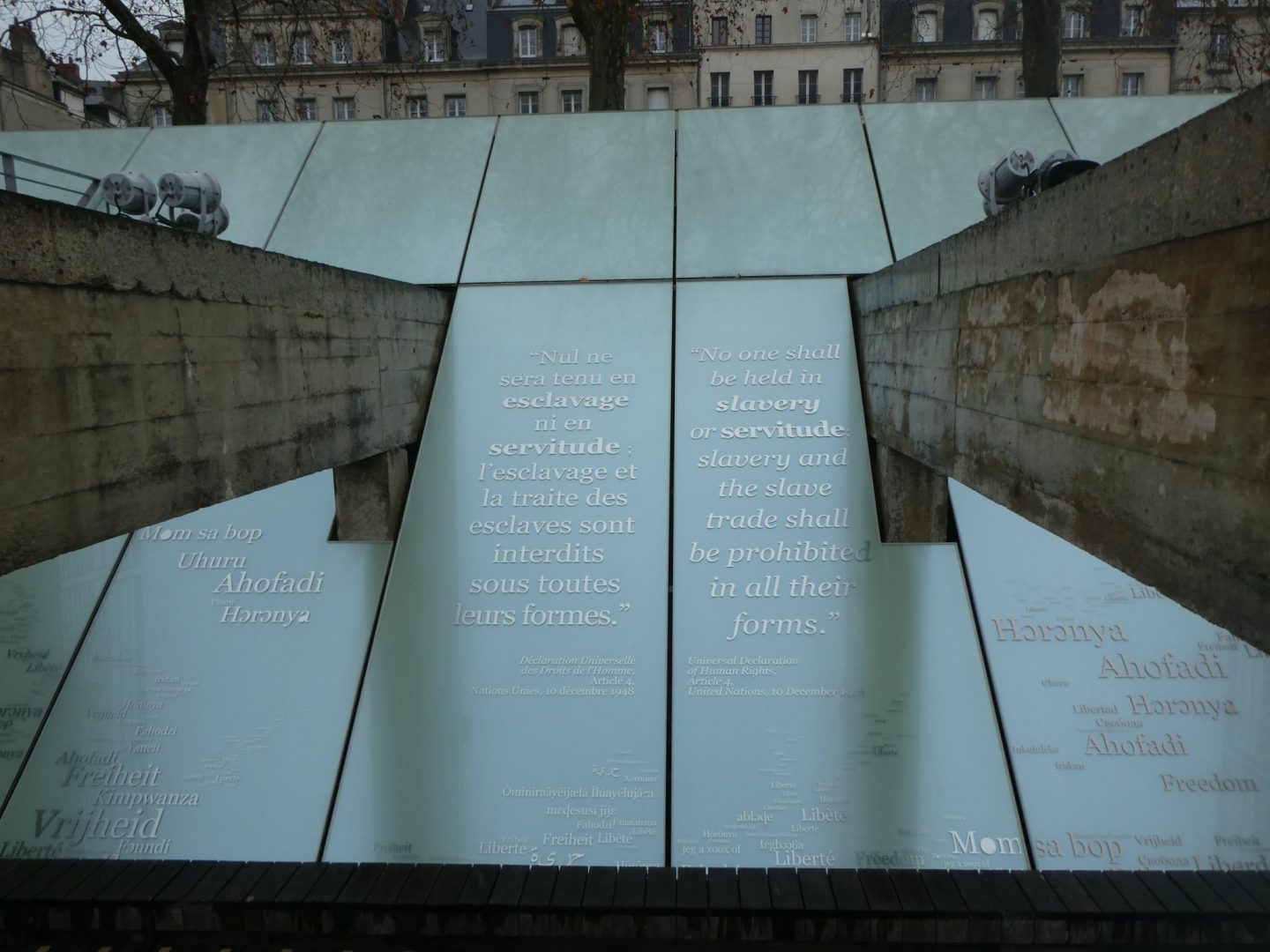 Even after the abolition of slavery, Nantes remained one of France’s biggest ports and grew to be one of its major industrial centres.  Shipbuilding was the mainstay of the economy until the late 1970s when recession forced the closure of many factories and shipbuilding moved to St Nazaire.  But Nantes has had a university since 1460, the first in Brittany, and from the early 2000s has reinvented itself as a city of learning, creativity and the arts.

Which brings us to the real reason we came to Nantes.  There’s lots of chateaux along the Loire, lots of historic towns with cobbled streets and storied histories. But nowhere else – at least to our knowledge – has a 12 metre high animatronic elephant.  That’s right, we came to see The Great Elephant.

His home is Les Machines des I’lle.  In the covered buildings of the former shipyards, this place is truly amazing.  The Galerie des Machines contains a dozen or so huge animatronic creatures which machinists demonstrate for visitors.

An oversized humming bird beats its wings and swoops in to sip nectar from a flower. 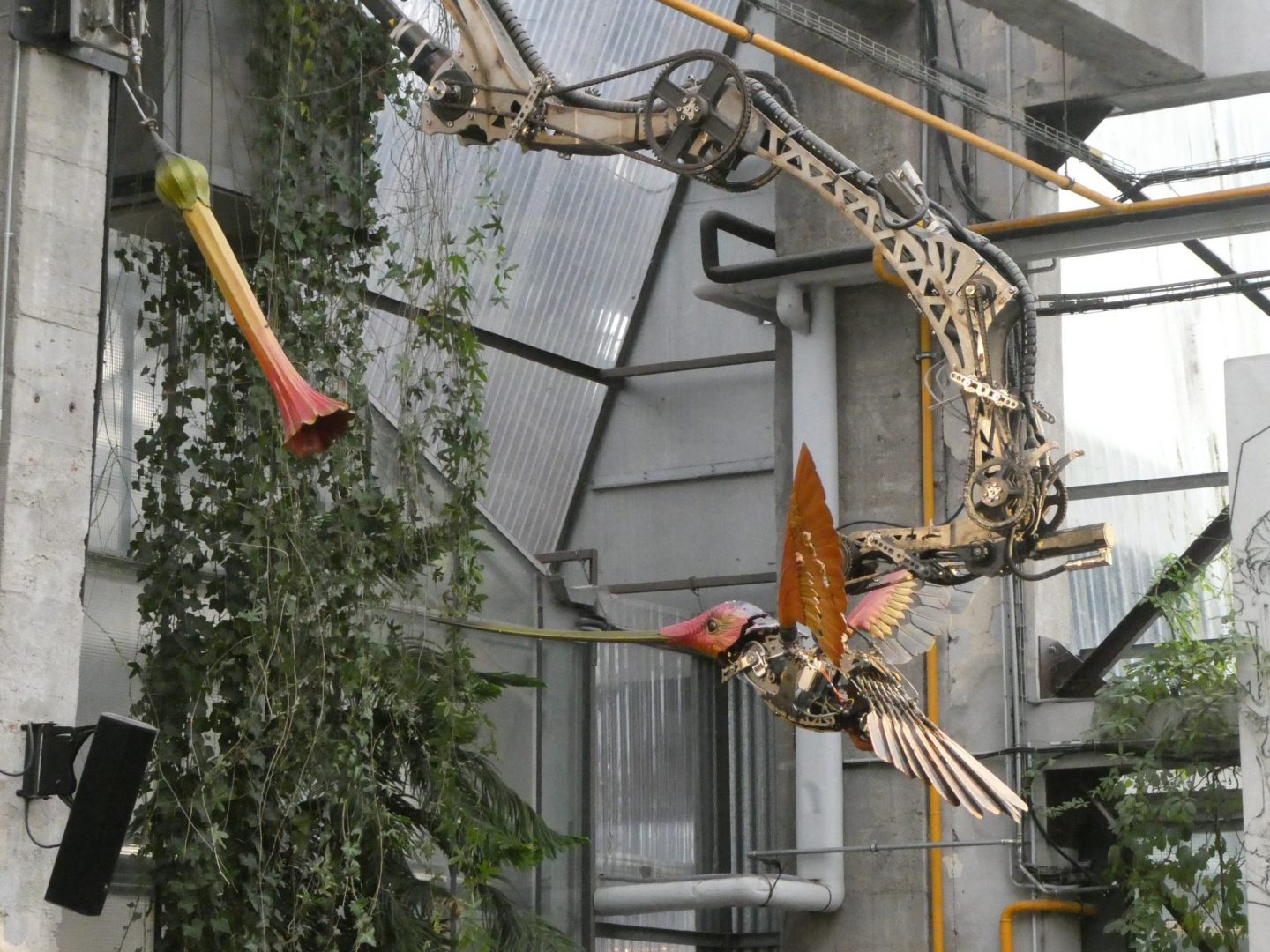 A goggle-eyed chameleon creeps along a branch and catches an insect with his tongue. 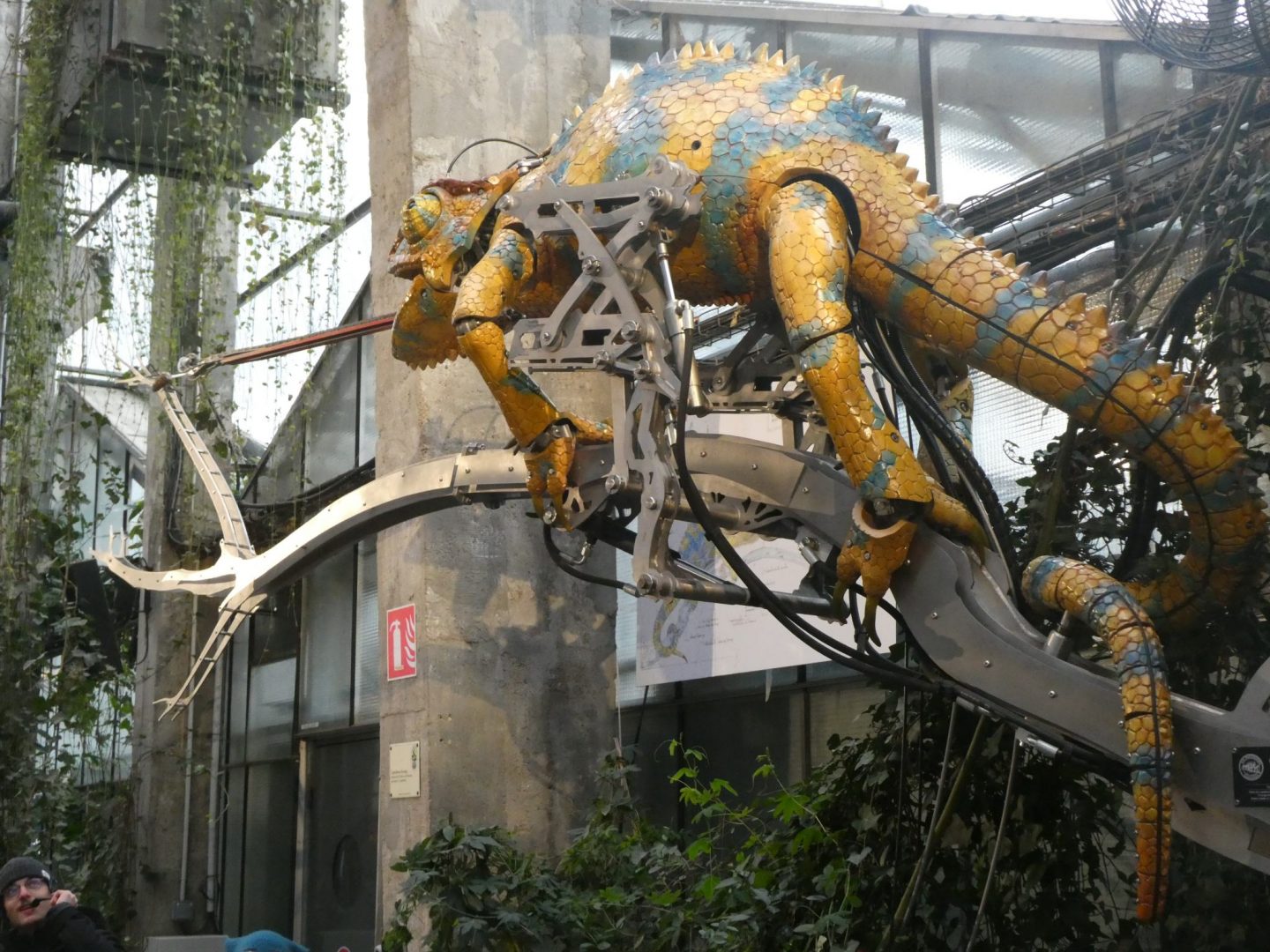 A huge heron takes visitors for a glide around the pavilion. 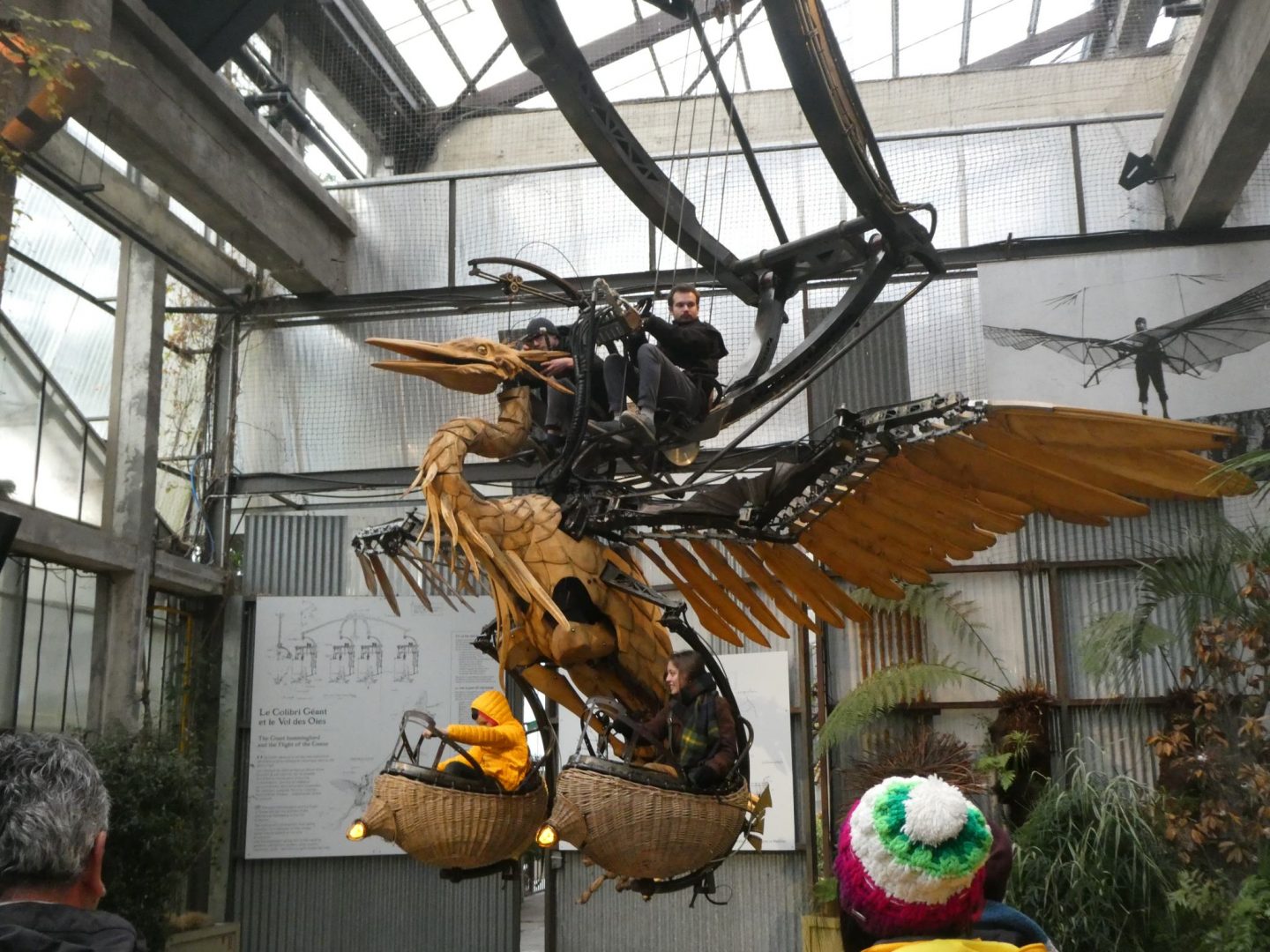 And then there’s the giant spider.  The stuff of nightmares! 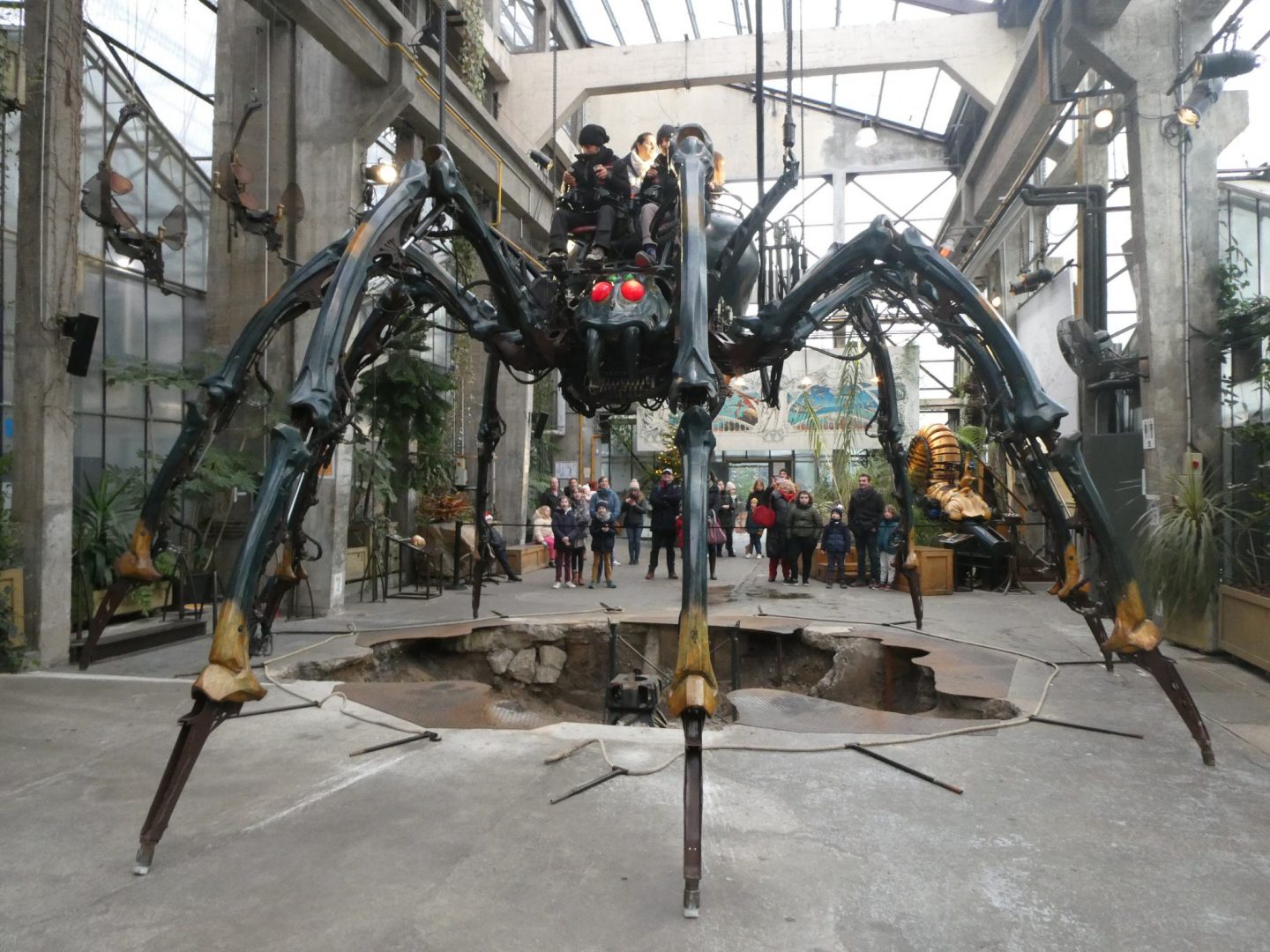 With some of them, visitors are invited to operate the machine.  Kids love the giant centipede and ant. 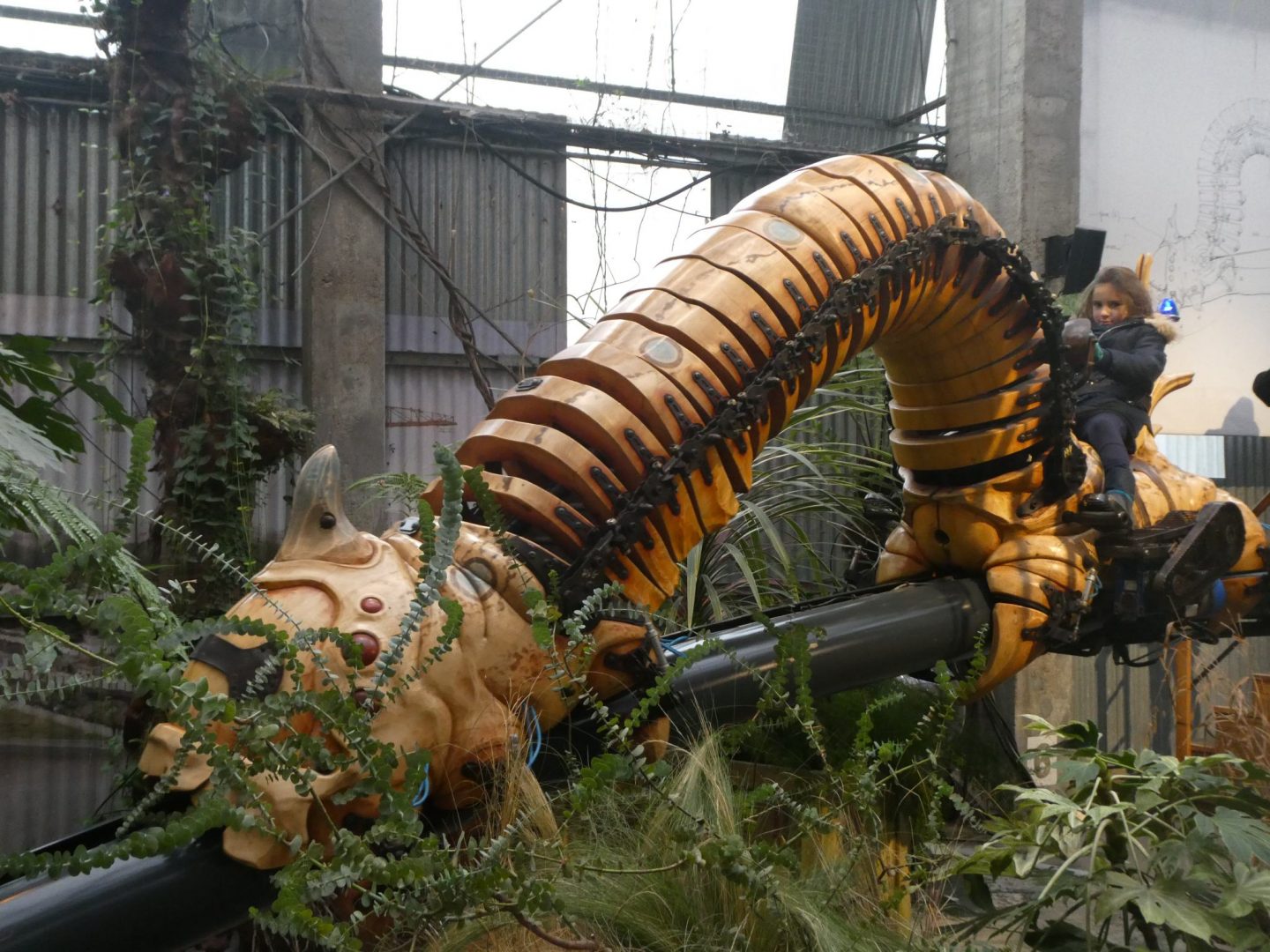 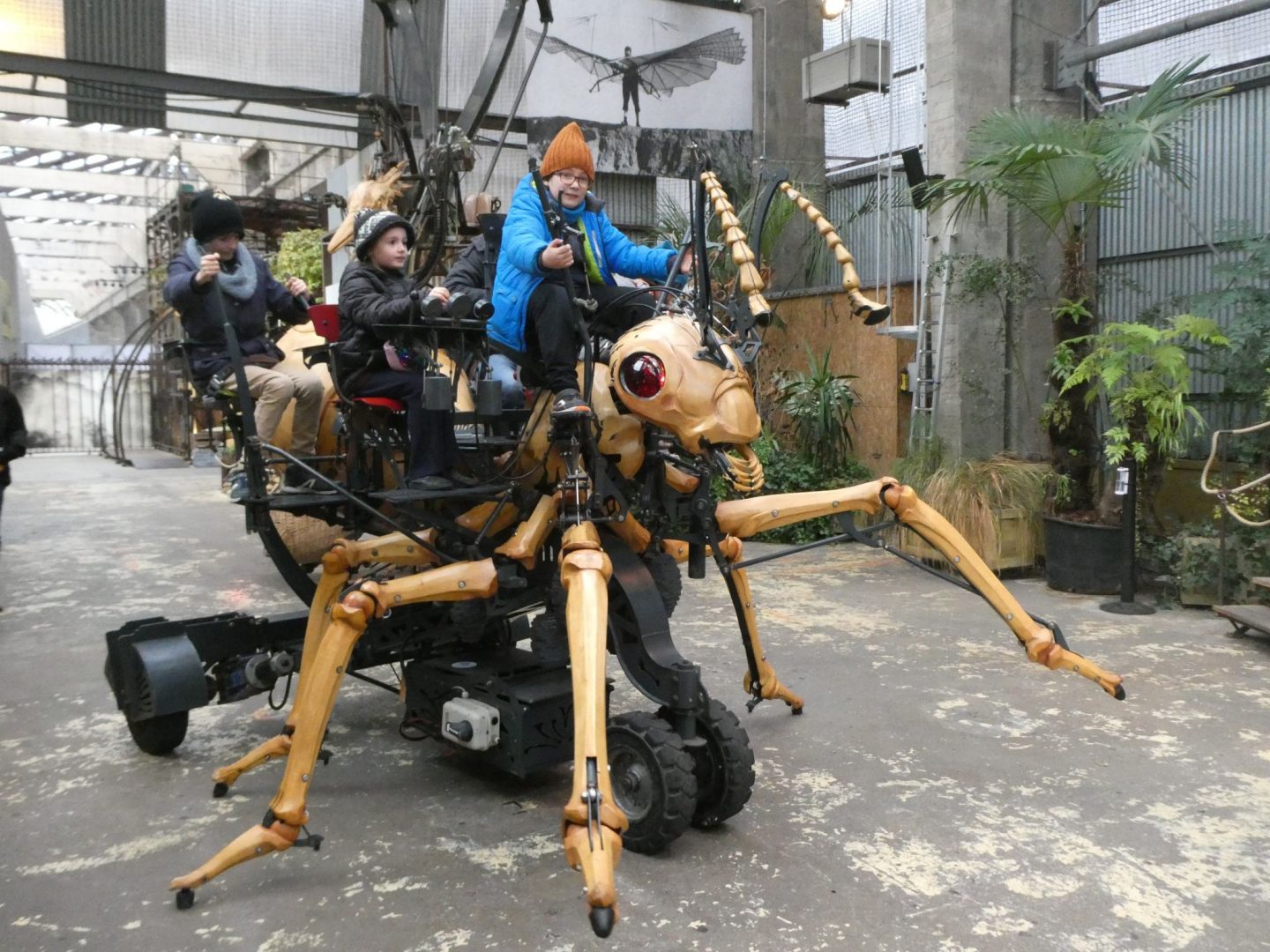 Outside there’s a three-level carousel with animatronic sea creatures.  The workshop where new machines are being designed has a mezzanine gallery so visitors can walk around and see the creatives in action, and there’s a short film about how it all took shape.

But without doubt the best of all is The Great Elephant.  He is 12 metres tall.  That’s four times the height of the average African elephant, the biggest found in nature.  Made from 45 tonnes of wood and steel, he has a hollow torso with balconies and a covered platform on his back.  Each day he takes a walk around the old shipyard quarter carrying up to 50 people. 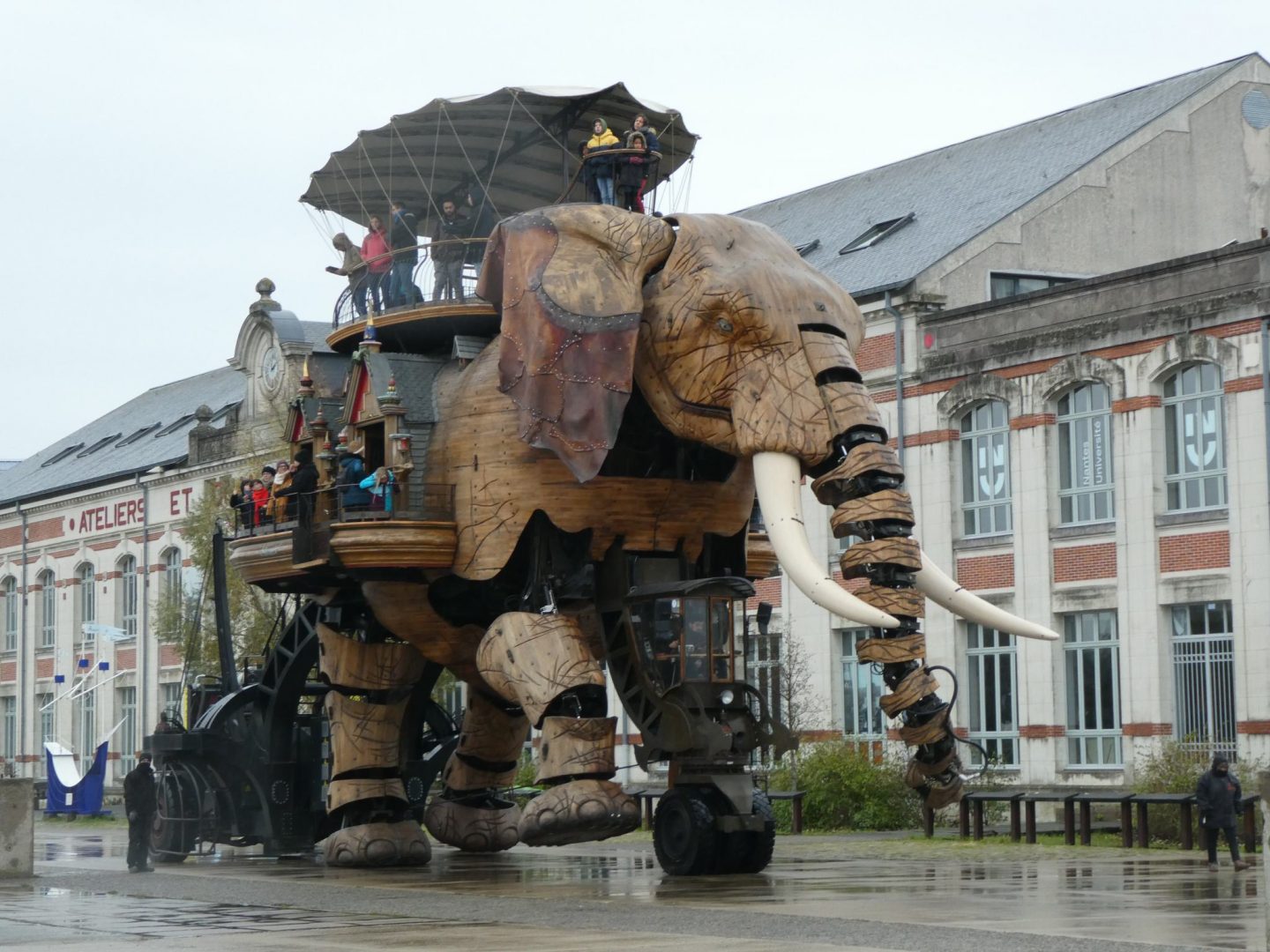 Occasionally he blows a forceful gush of water from his trunk.  We can tell you from first hand experience, you don’t want to be in the way when he does! 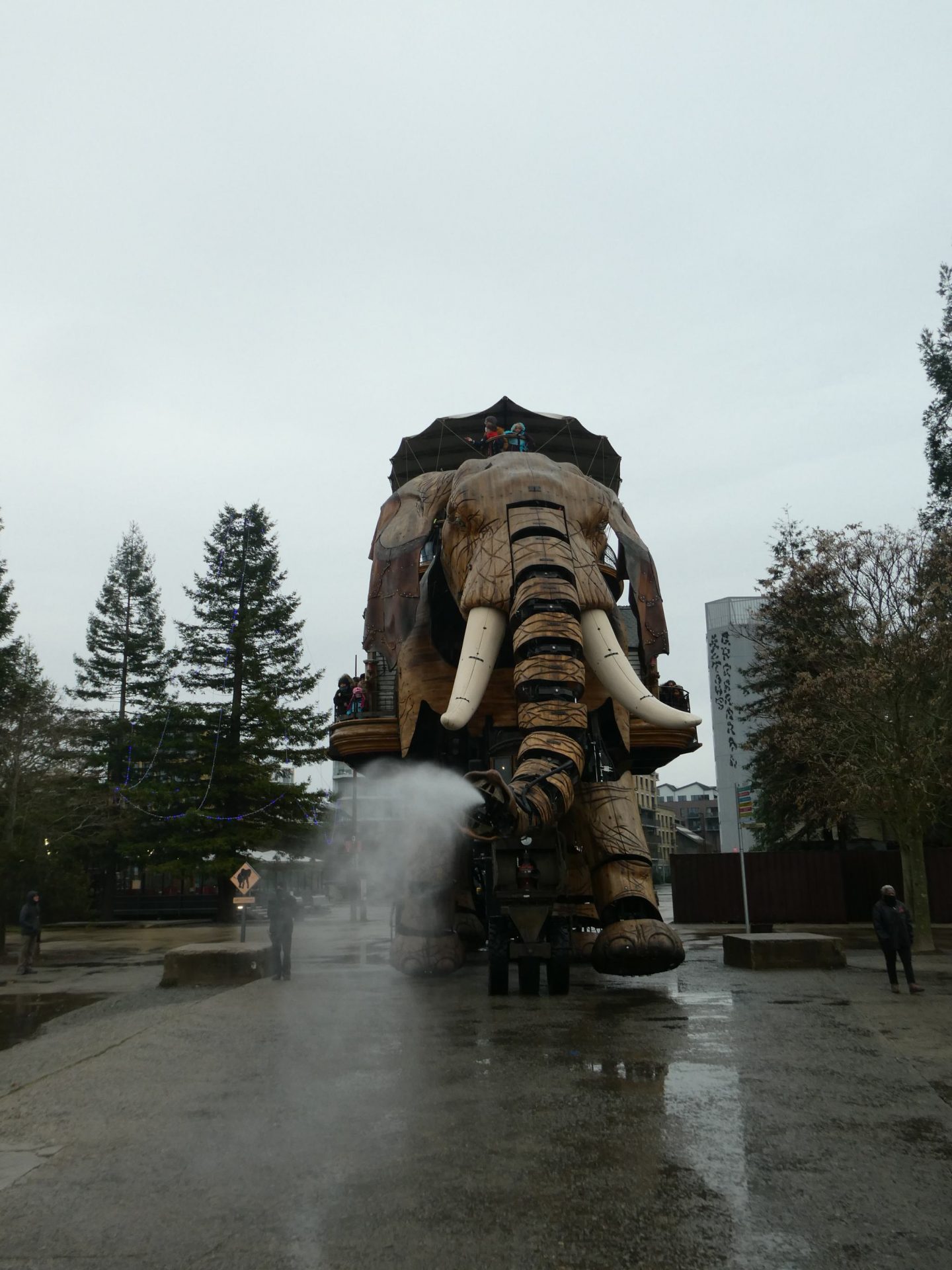 In another example of the city’s artistic inclinations, there’s been a project to install quirky shop signs.  The tourist authority commissioned local artists to ‘reinterpret’ the signs of local businesses, with their permission of course!

We loved the giant set of dentures made out of rigolettes, a local confectionary made by the shop over which the sign hangs. 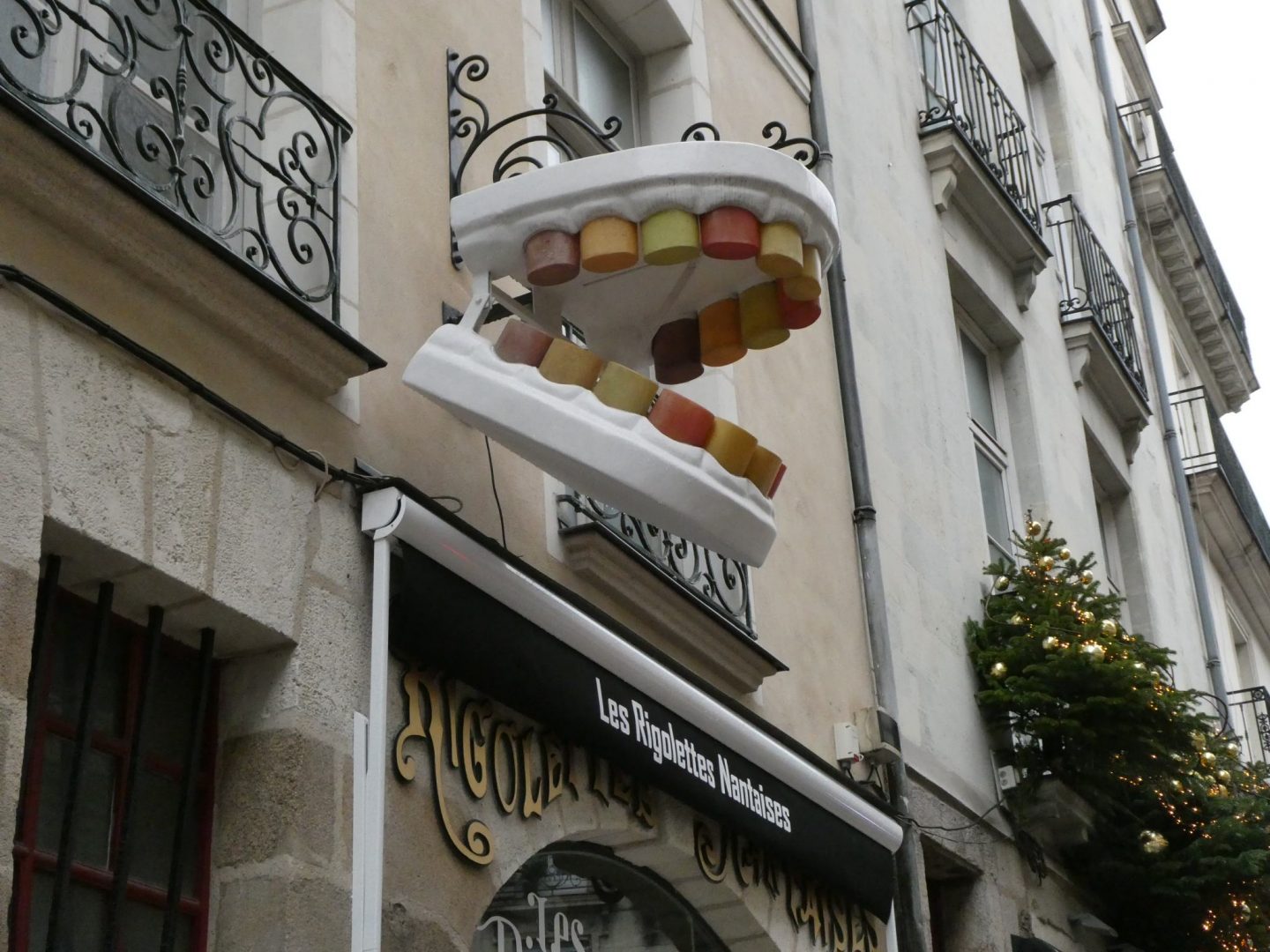 Some are a bit subtle.  Outside the Hotel Voltaire is a meter which counts sheep leaping over a fence, representing how many nights guests have slept at the hotel.  A riff on ‘counting sheep’. 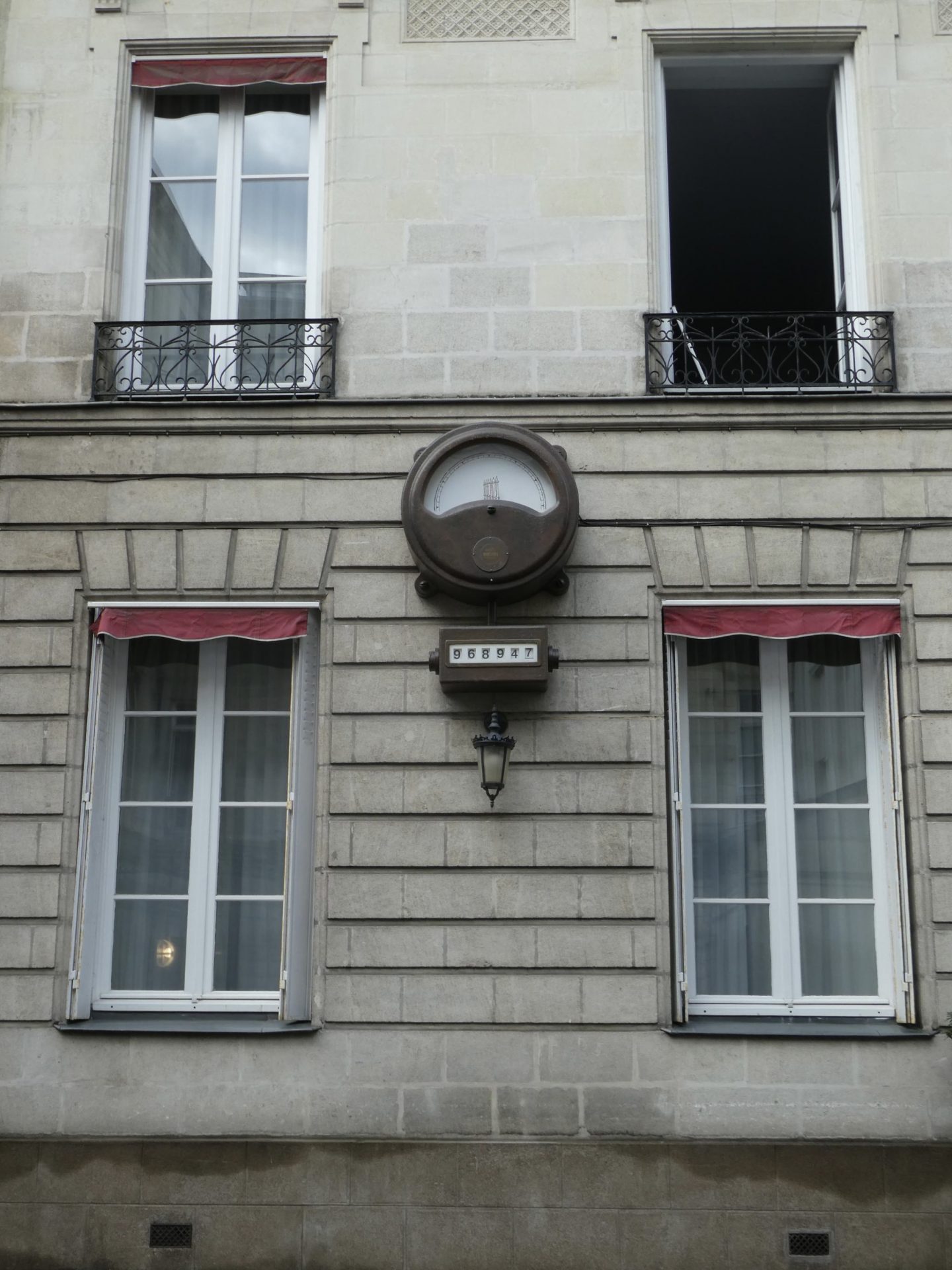 Nantes’ Botanical Gardens contains more than 10,000 species of plants, making it the fifth biggest collection in France.  But its artworks attract visitors as well.  Each year the Gardens andministration invites an artist to create an installation.  Some become permanent, like a collection of giant flower pots which is now the children’s playground and an enormous sleeping cat (?) in different grasses. 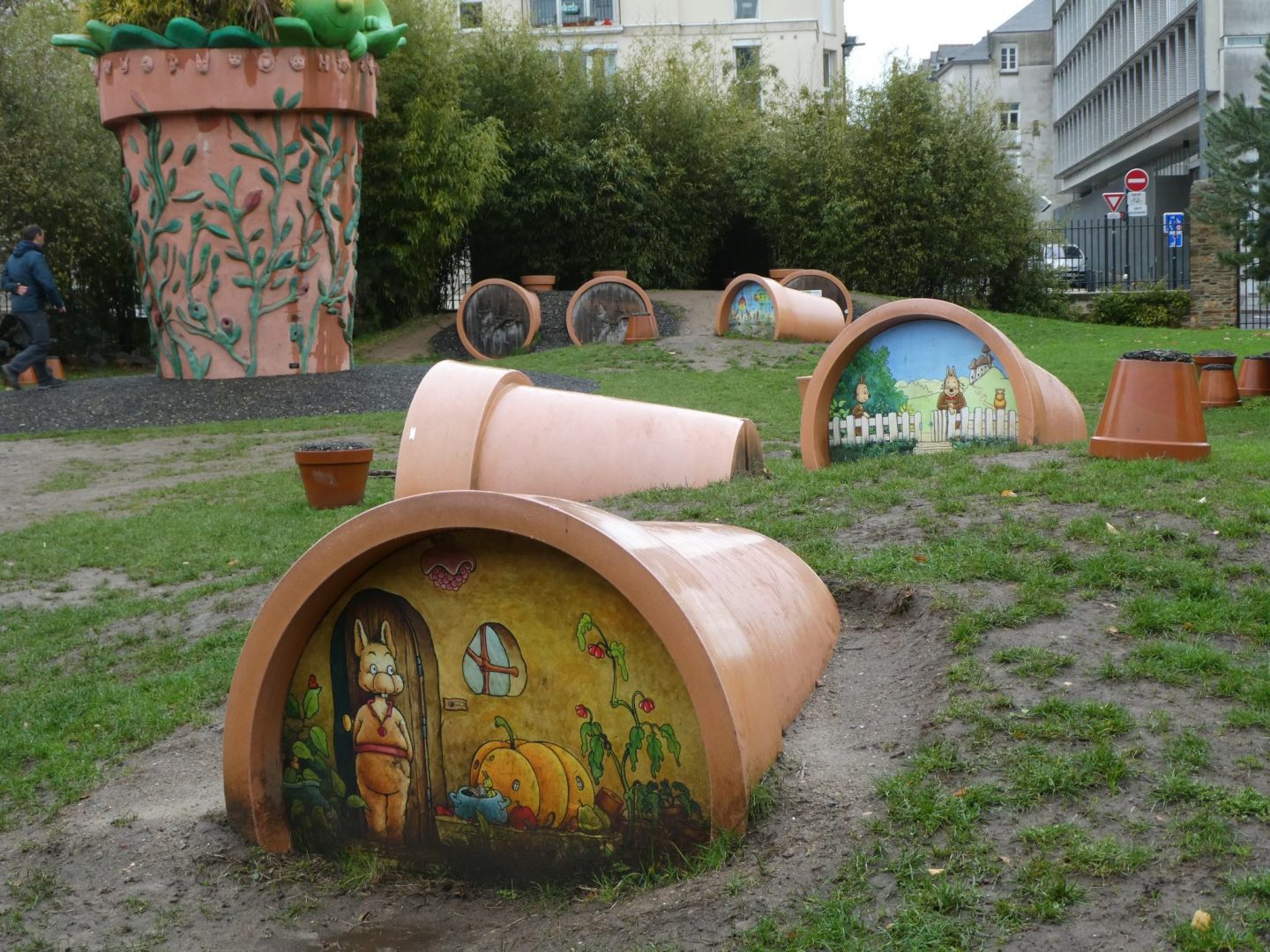 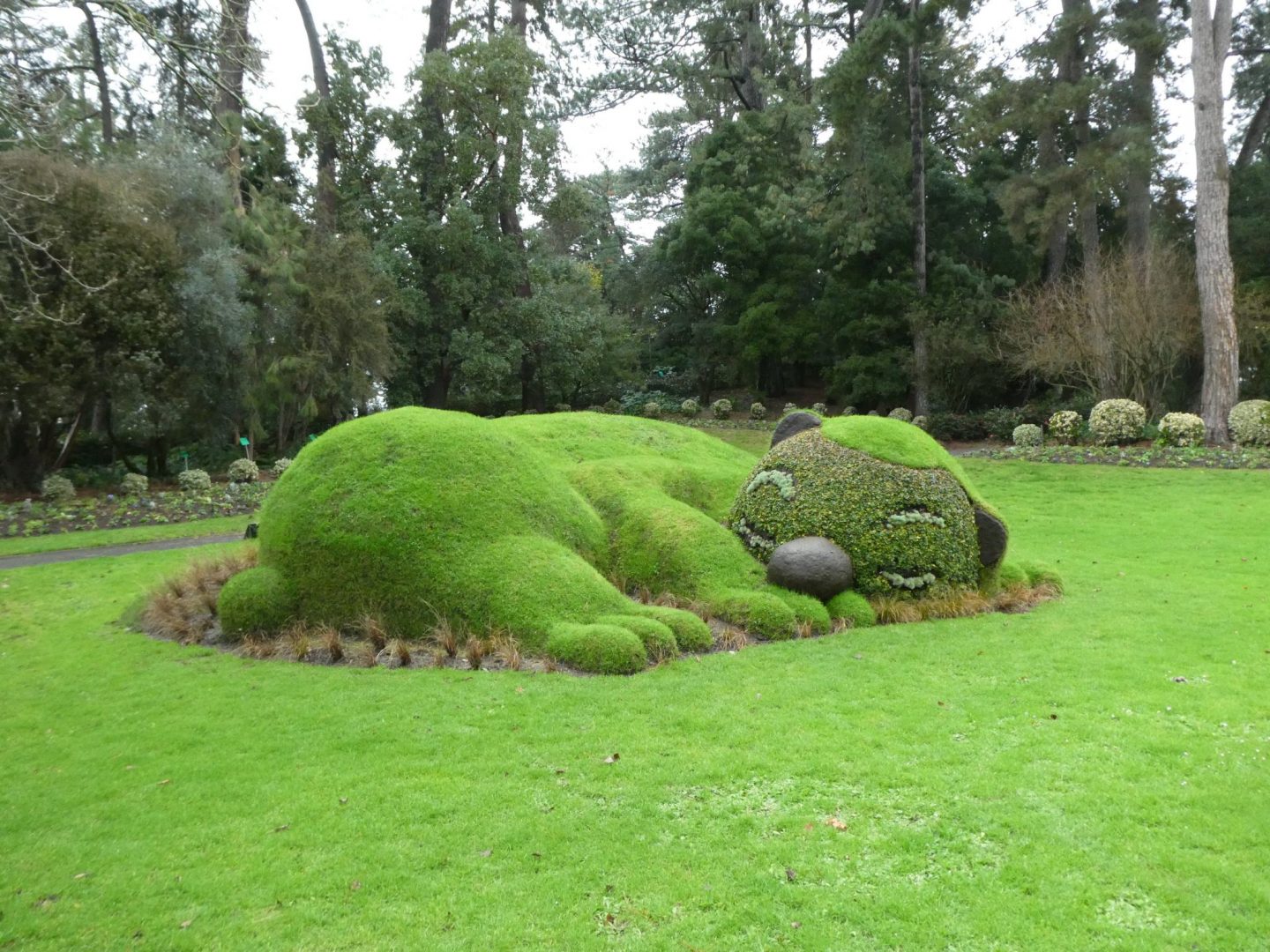 In 2020, 2021 and again this year, famous French graphic artist Jean Jullien has installed giant copies of characters from his works.  We don’t know him or his work but the characters were really fun. 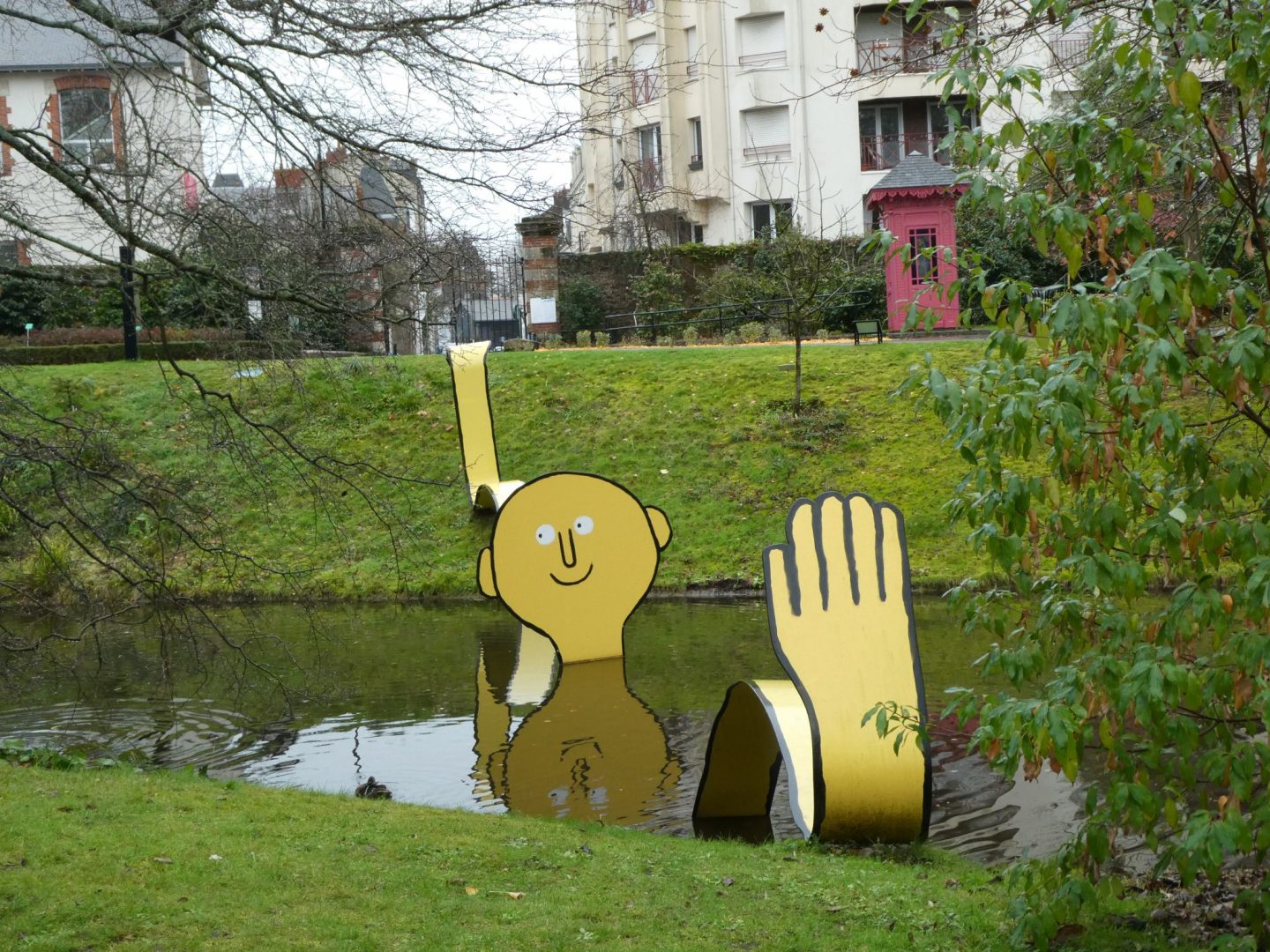 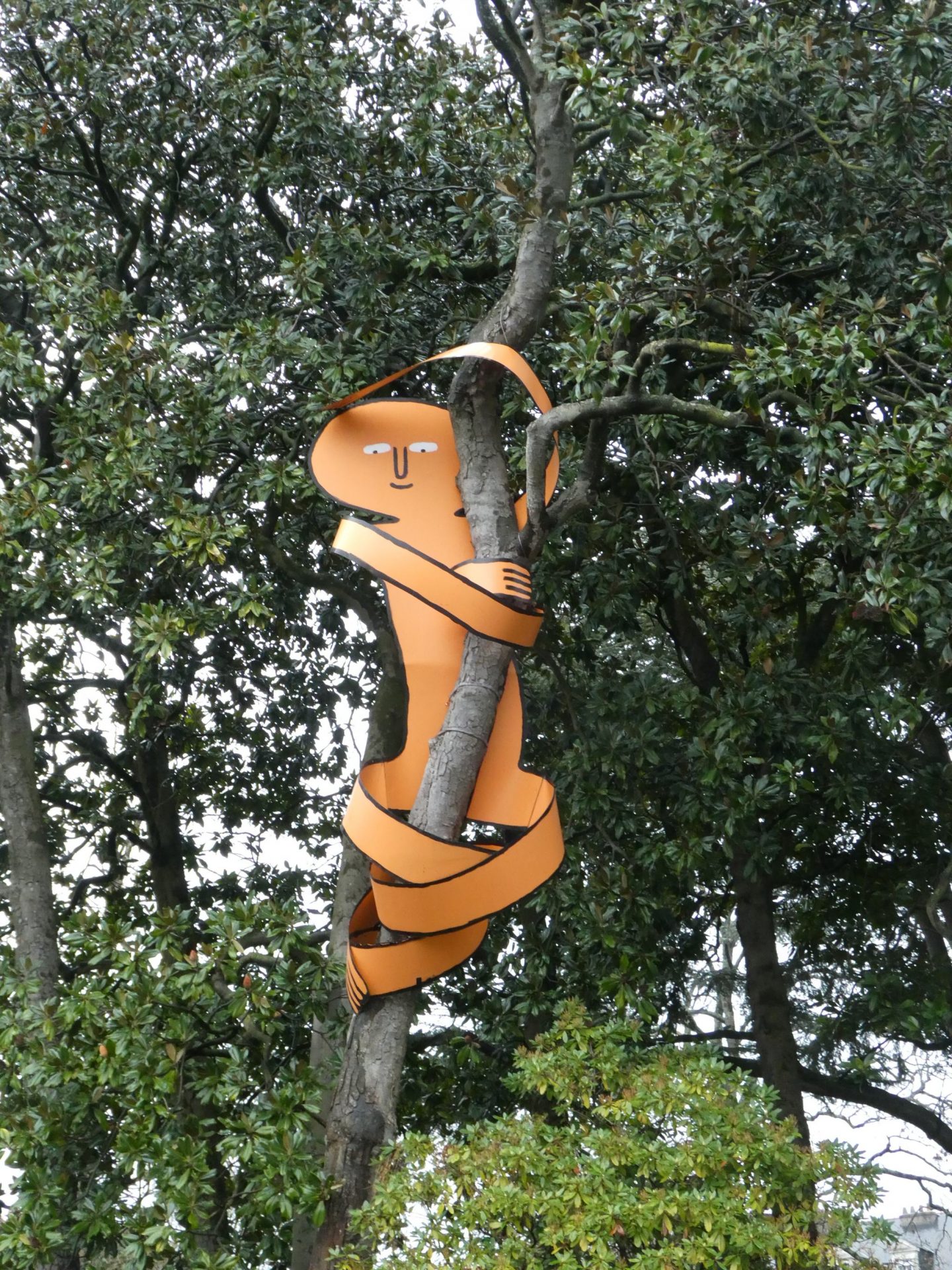 Nantes has created an ingenious way to make its art and cultural icons accessible to visitors.  It’s so simple, it’s amazing other cities haven’t adopted it.  It’s called the Green Line.

Quite simply, a green stripe on the pavement runs around the city, up side alleys, through parks and along the river for almost 20km.  Follow the green line and you can find statues, sculptures, street art, historic buildings and more.  The tourist office has a map and since most people wouldn’t want to walk the whole thing in one day, it’s easy to split it into sub-circuits depending on what areas interest you most.

Monsieur Jullien even incorporated the Green Line into his most recent installation. 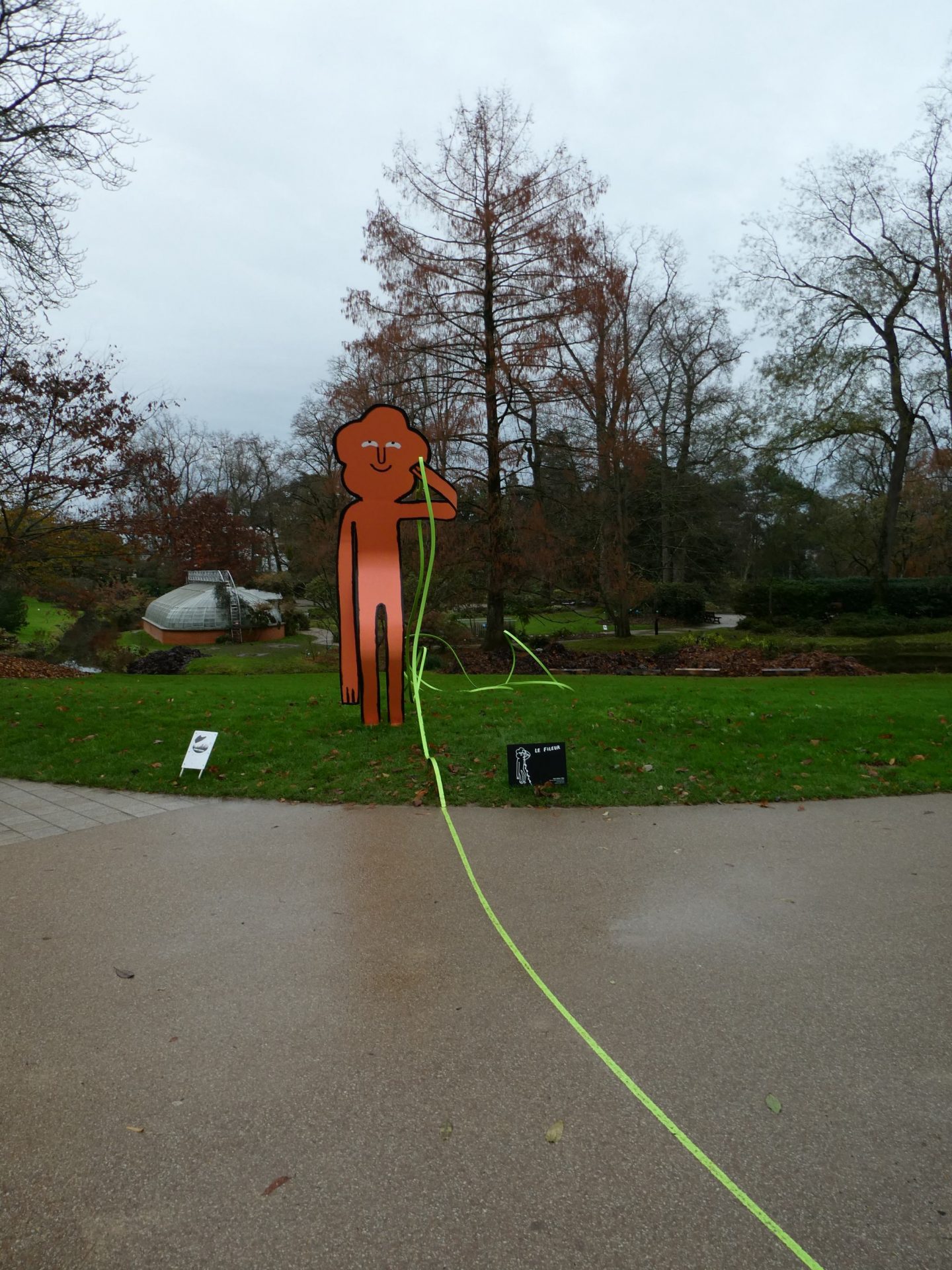 The line is how we found Ode to Sidestepping, a bronze of a man with one foot on his plinth and the other stepping off into thin air. 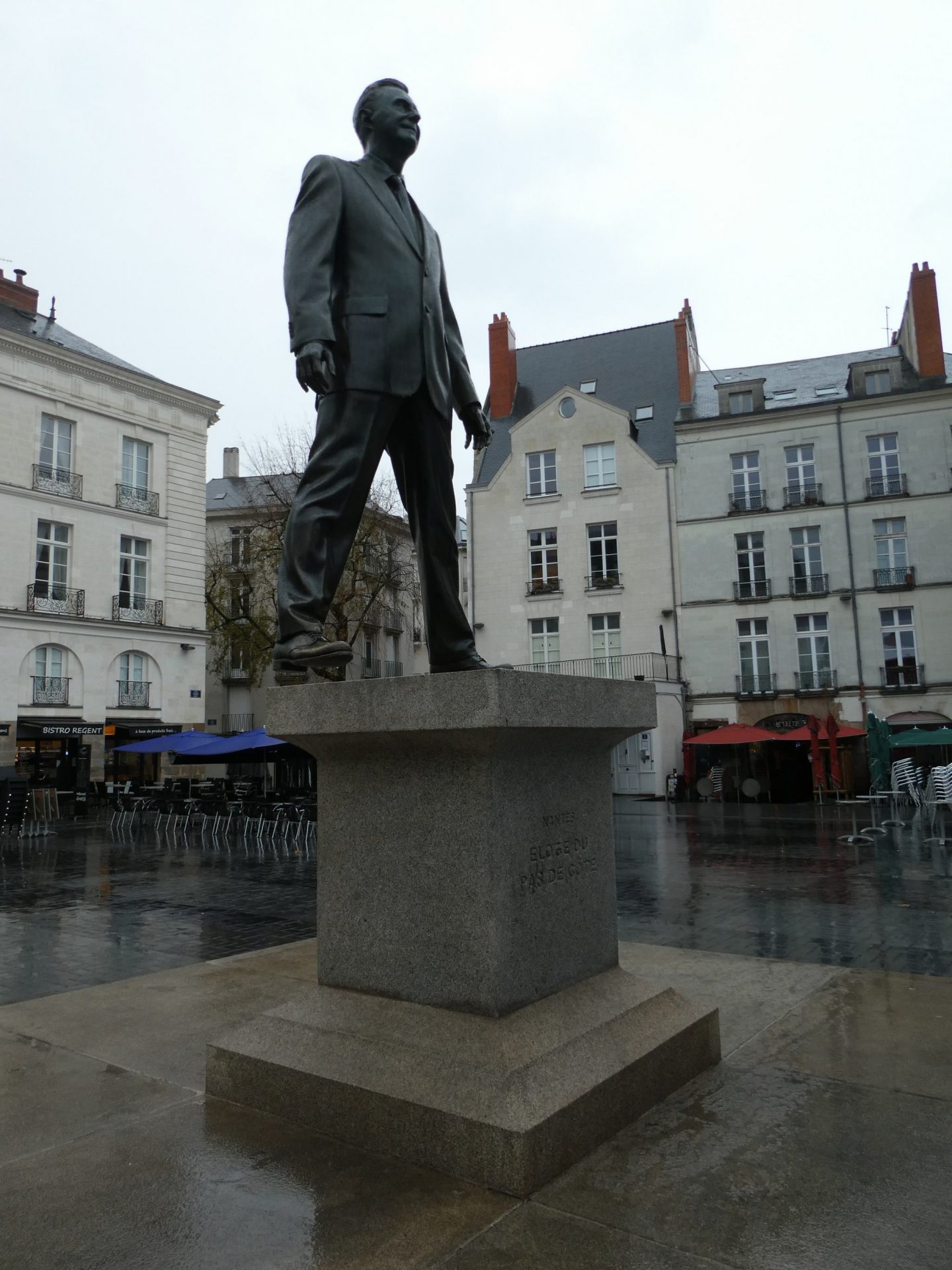 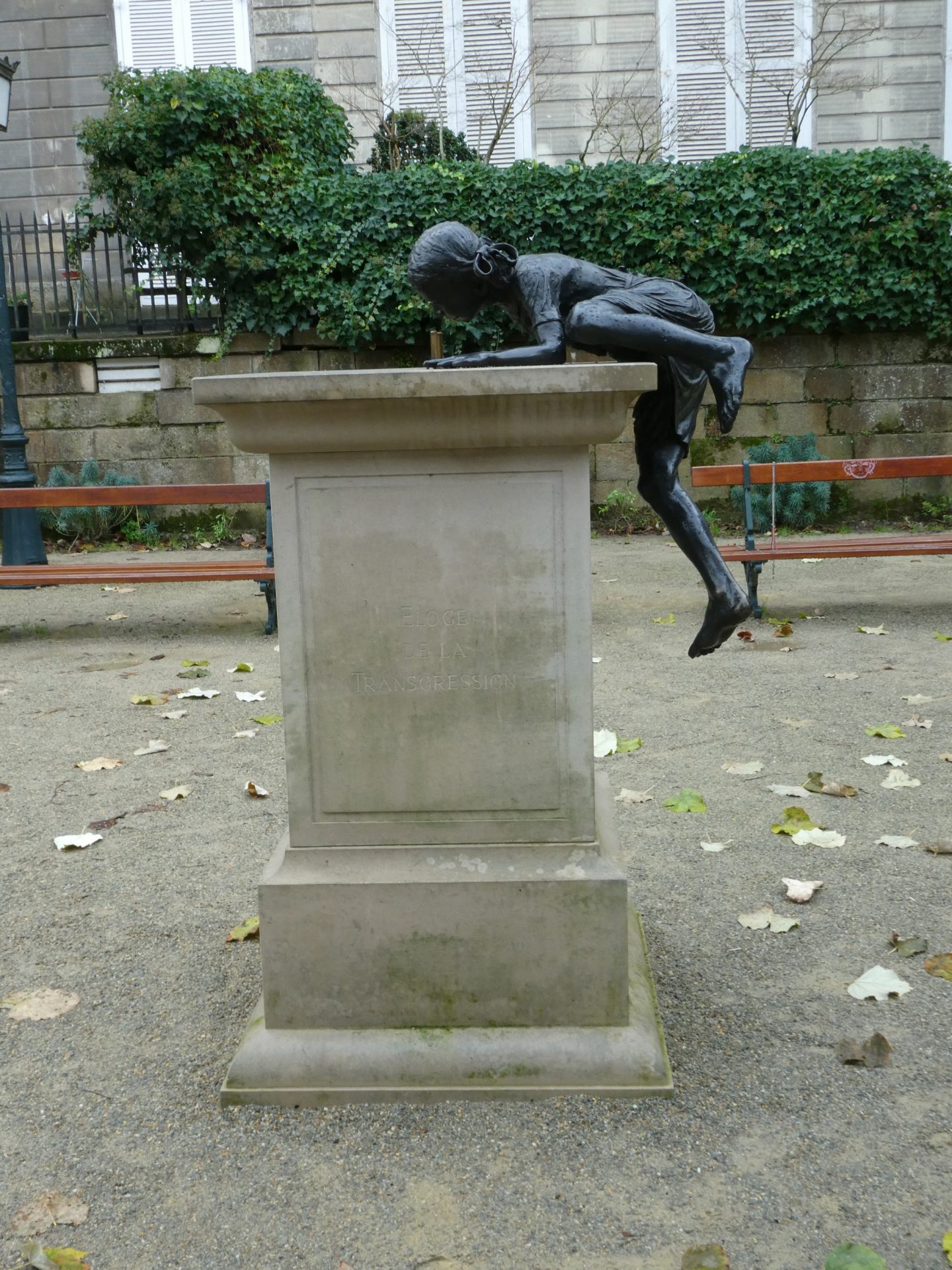 The Green Line also took us to lots of interestingly designed modern buildings.   Some of which take themselves just a bit too seriously.  At this one, a faint sound, something between metal clicking and birds chirping, emanates from the space between the solid walls and the decorative outside.  In a classic piece of art gobblegook, it’s said that “by using sound as if it were a material substance, [the creator] tries to substitute the image with sound and reduce the importance of vision in order to even out the balance of our perception”.  Seriously, WTF?? 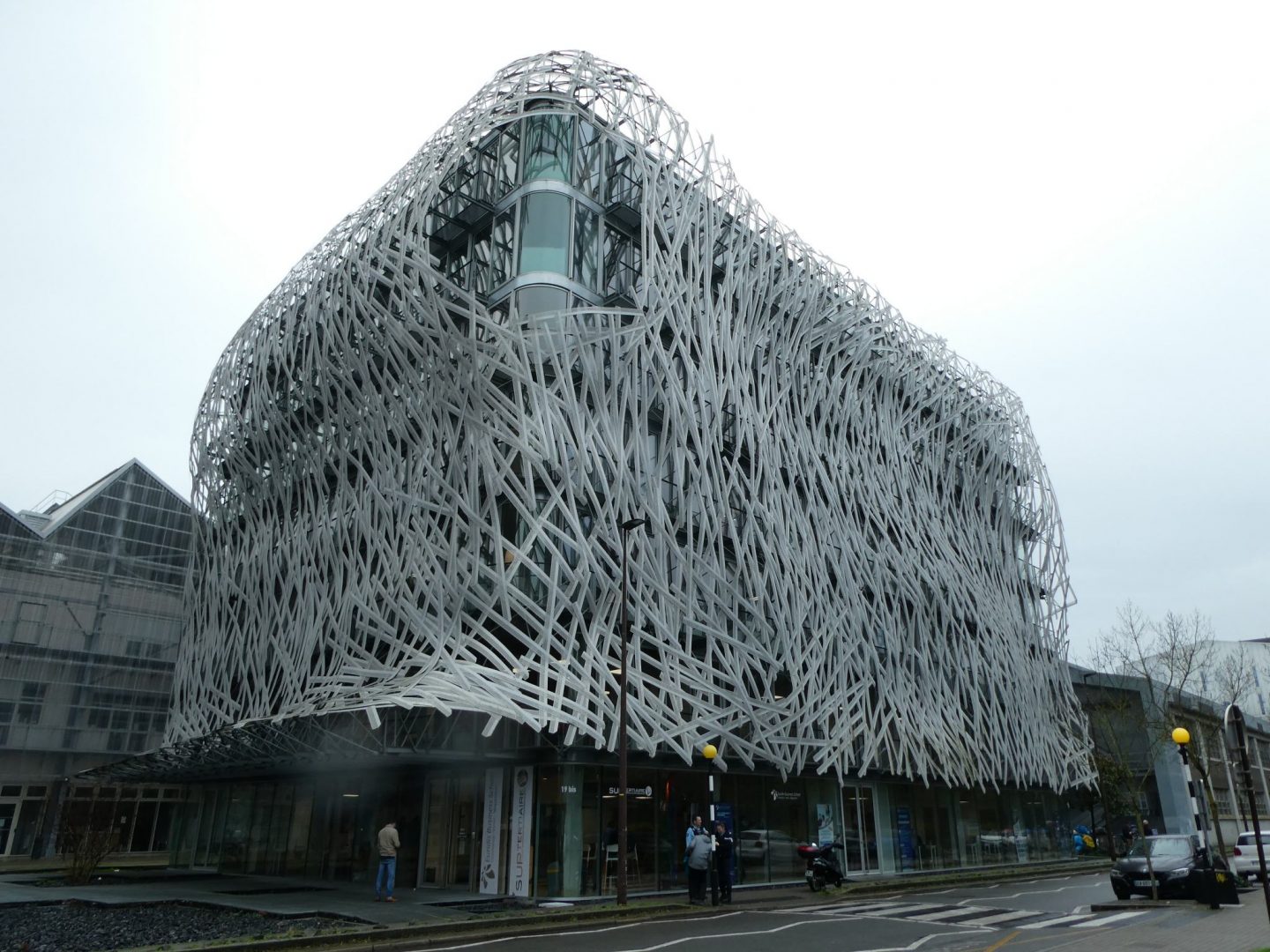 Almost but not quite so esoteric was this piece outside the University’s School of Polar Studies.  Apparently it “offers a poetic and metaphorical vision” of the school’s work.  Good grief. 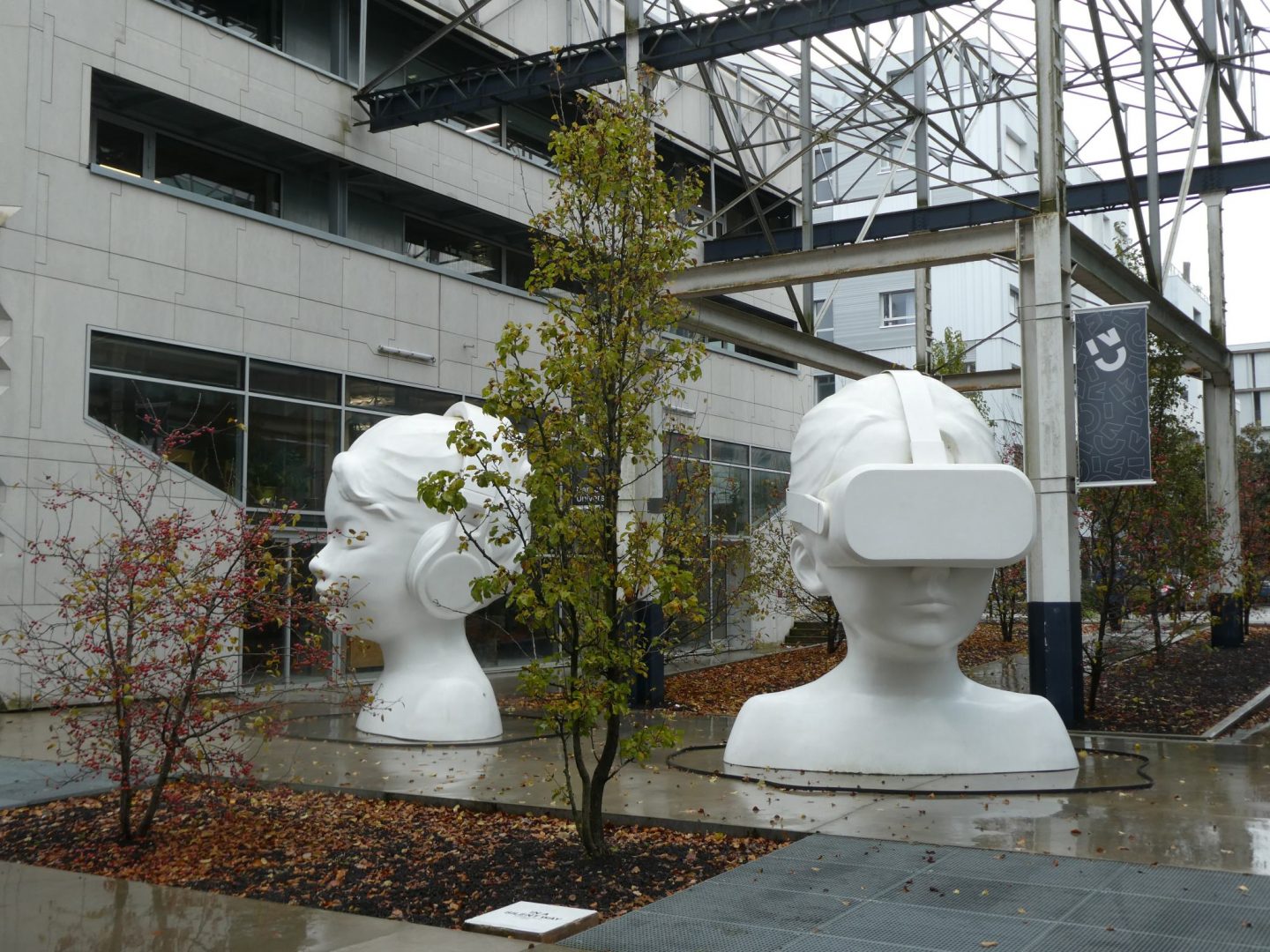 This one we liked.  An architectural design firm has in its courtyard an exact but gigantic copy of the principal architect’s measuring tape. 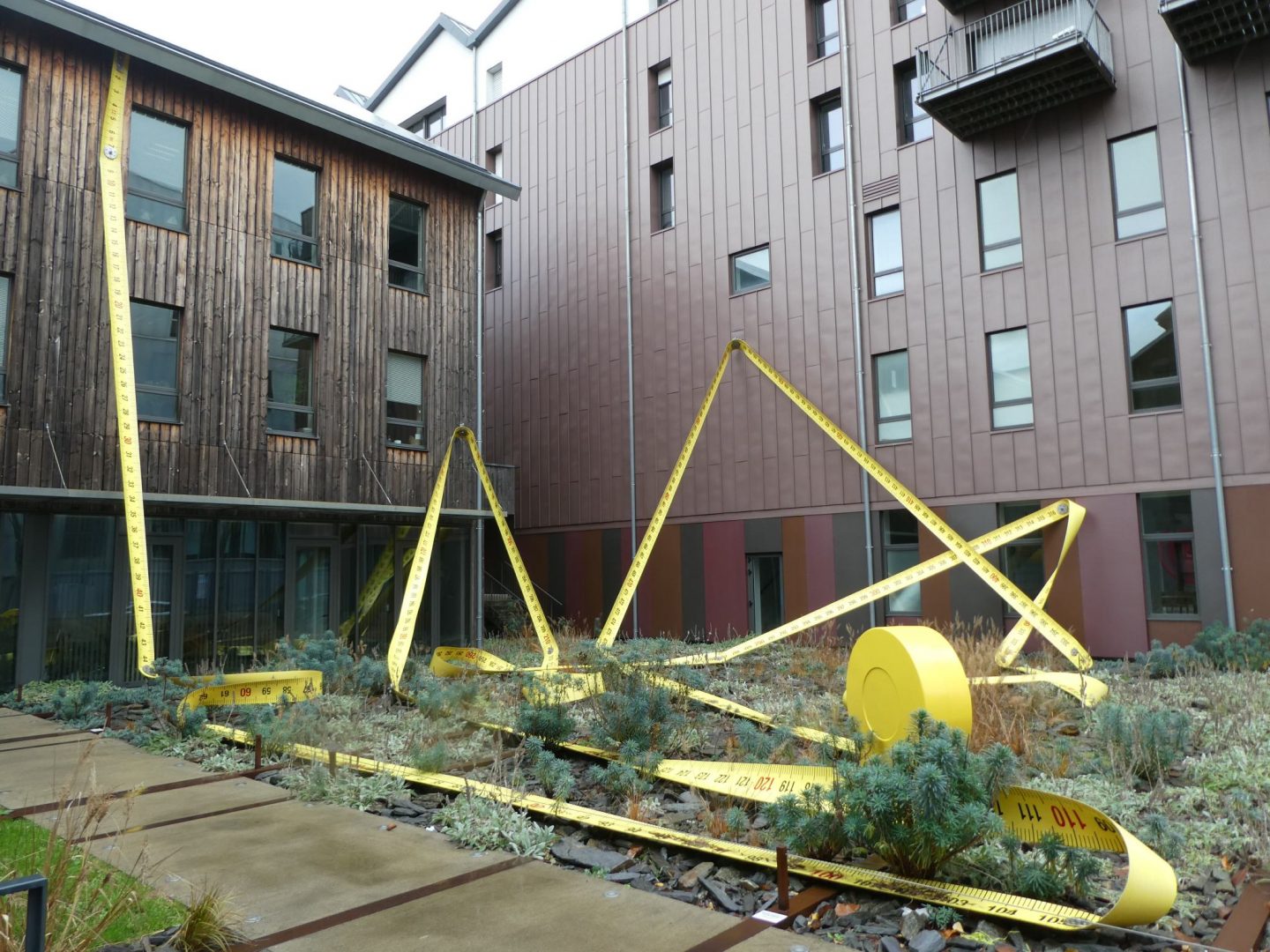 The historic Graslin Quarter is home to many elegant 19th century buildings. 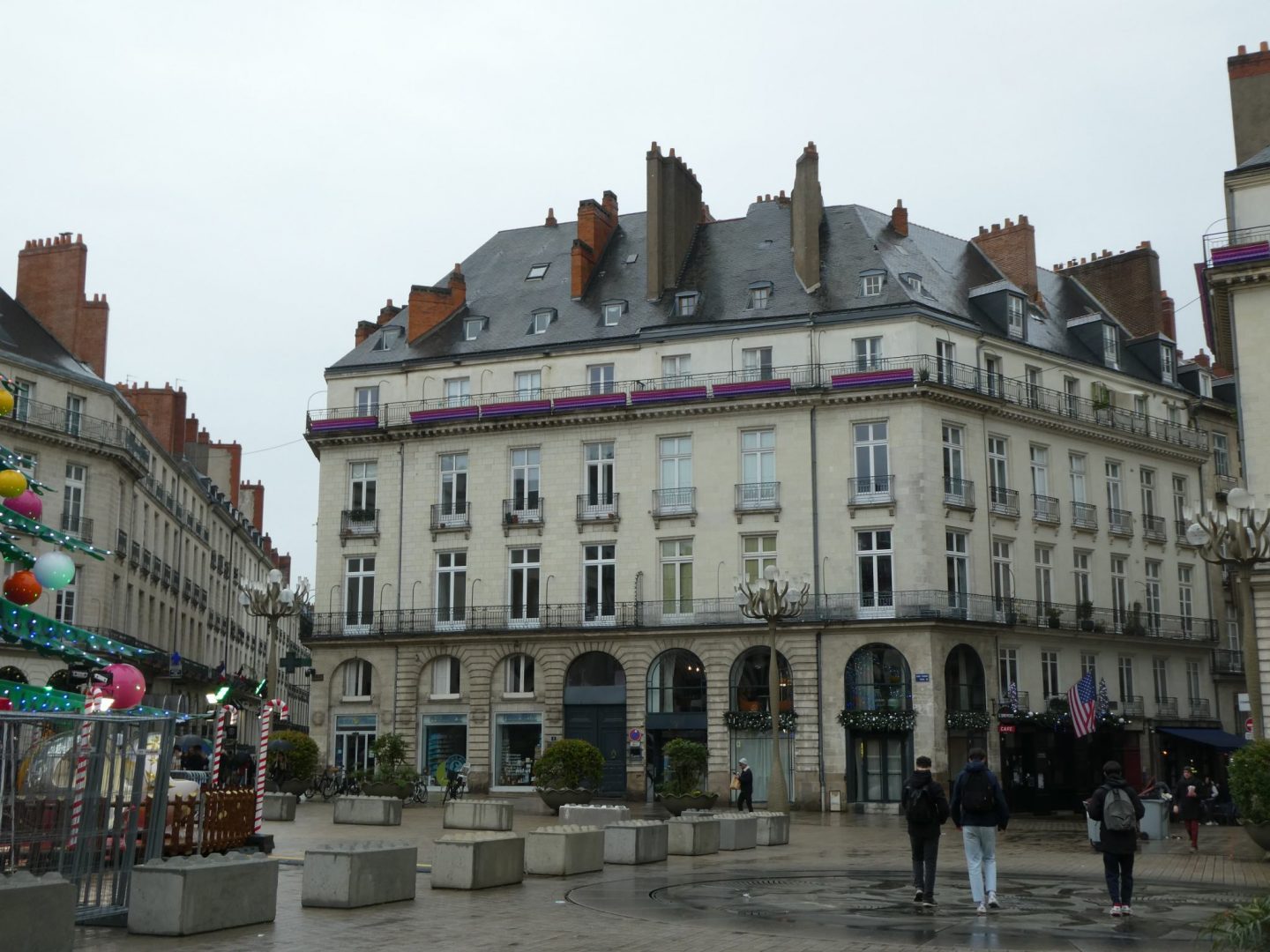 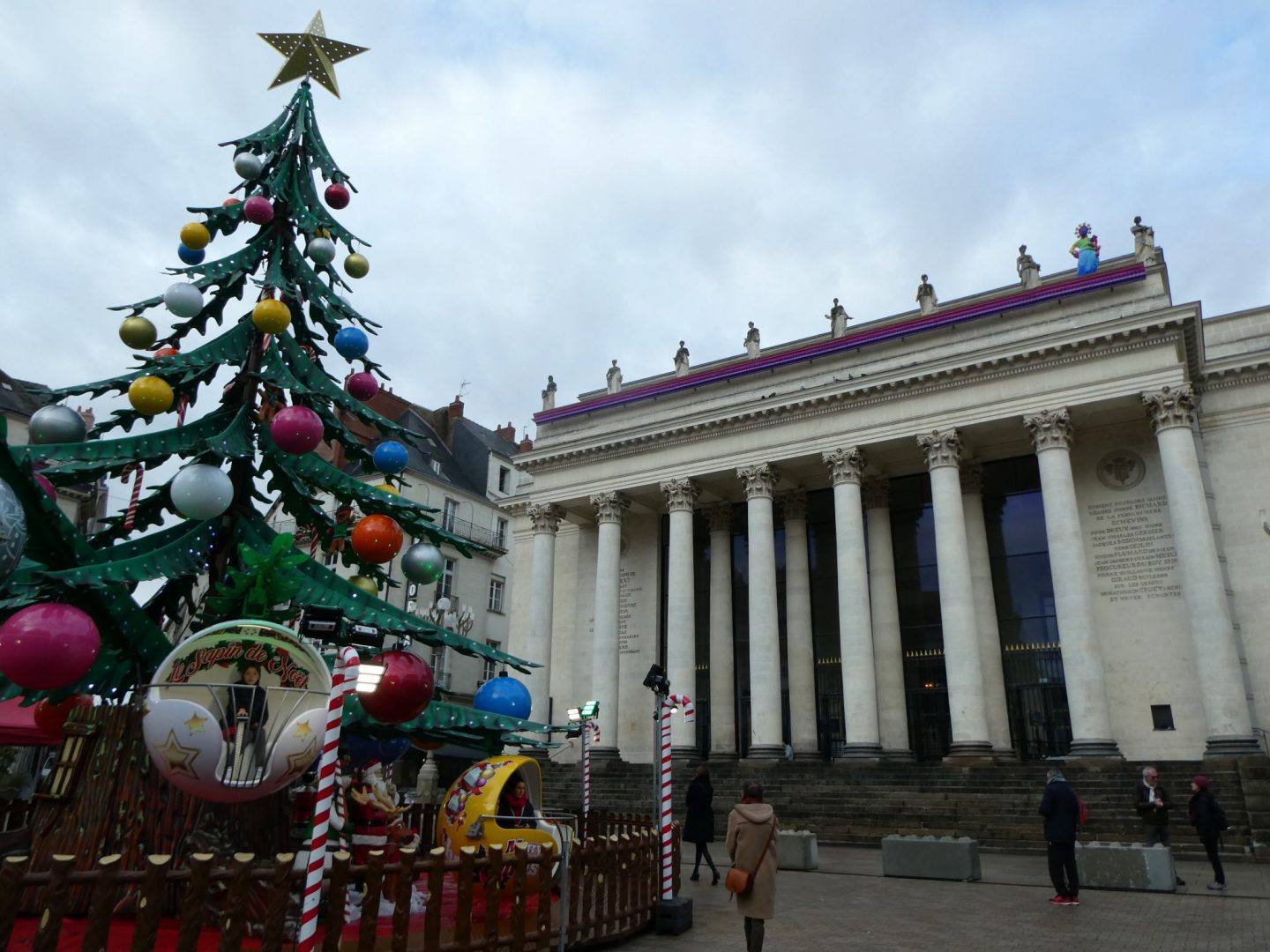 But look closely and a number of them are sporting fun additions.  Look again at the roof of the Opera House in the above photo.  It’s all part of the annual art festival. 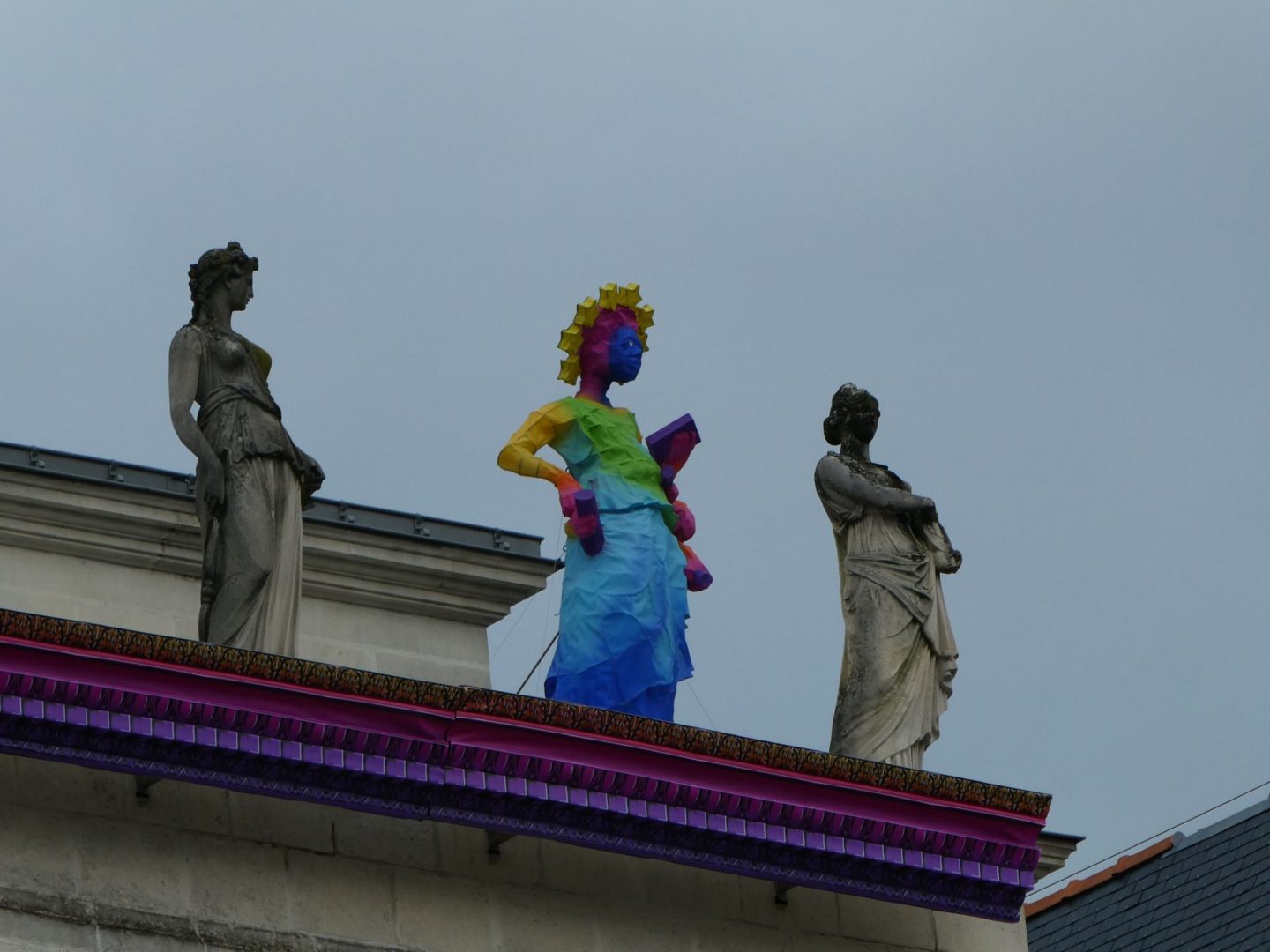 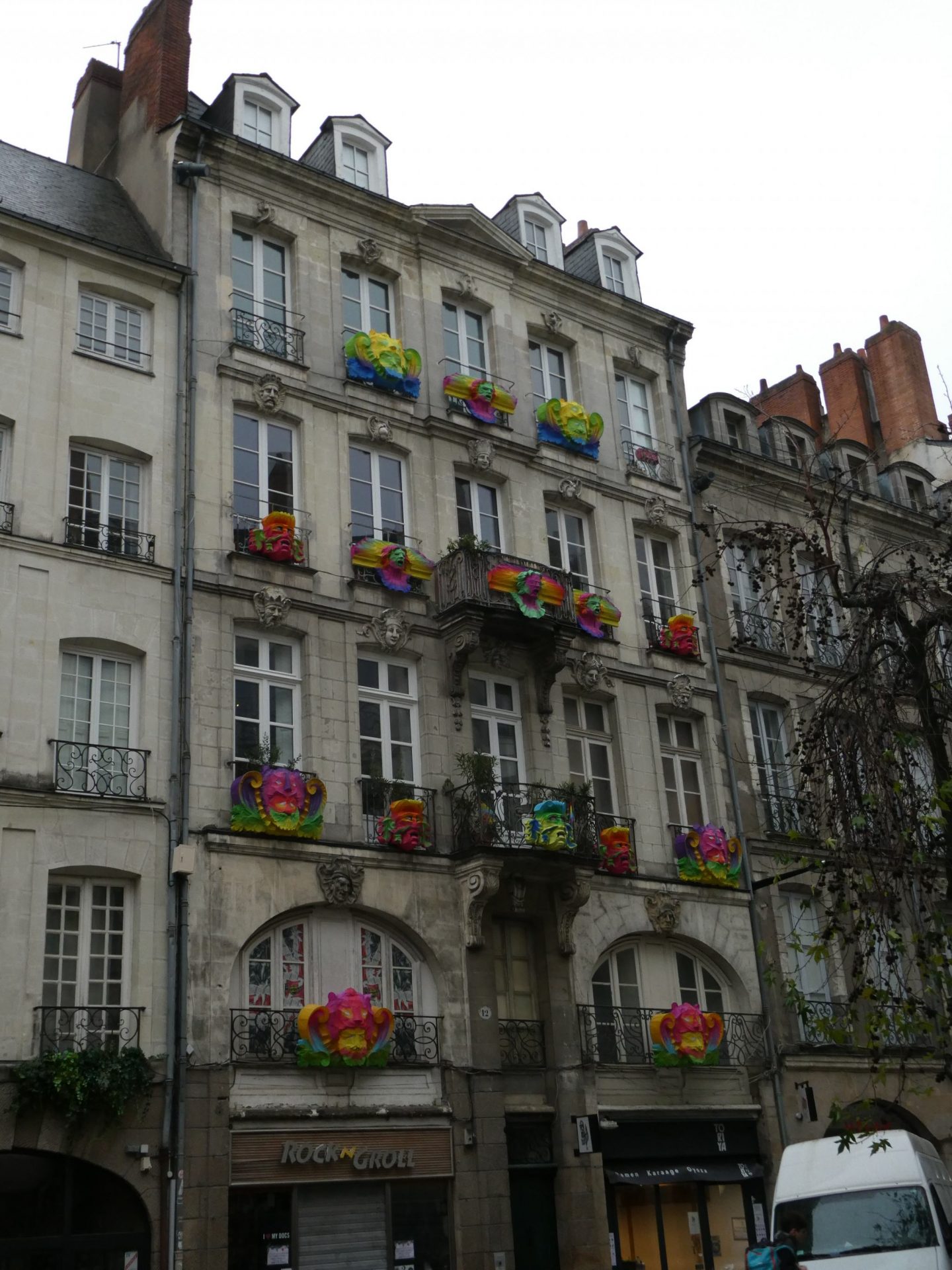 It’s also the prime shopping district for the city.  Nantes claims it is the only city in the world where the name of a street has given birth to a verb.  Rue Crebillon, known in the 1800s for its chic boutiques with lavish window displays, gifted the French language the word ‘crebillonner’ meaning  ‘window shopping’.

Paris is famous for its covered passages, but the Passage Pommeraye in Nantes is a rare thing indeed – a three storey covered passage.  Built in 1843, it is also a clever piece of design.  It links two streets on a steep slope but the internal configuration makes it appear to be on one level.  It’s beautiful. 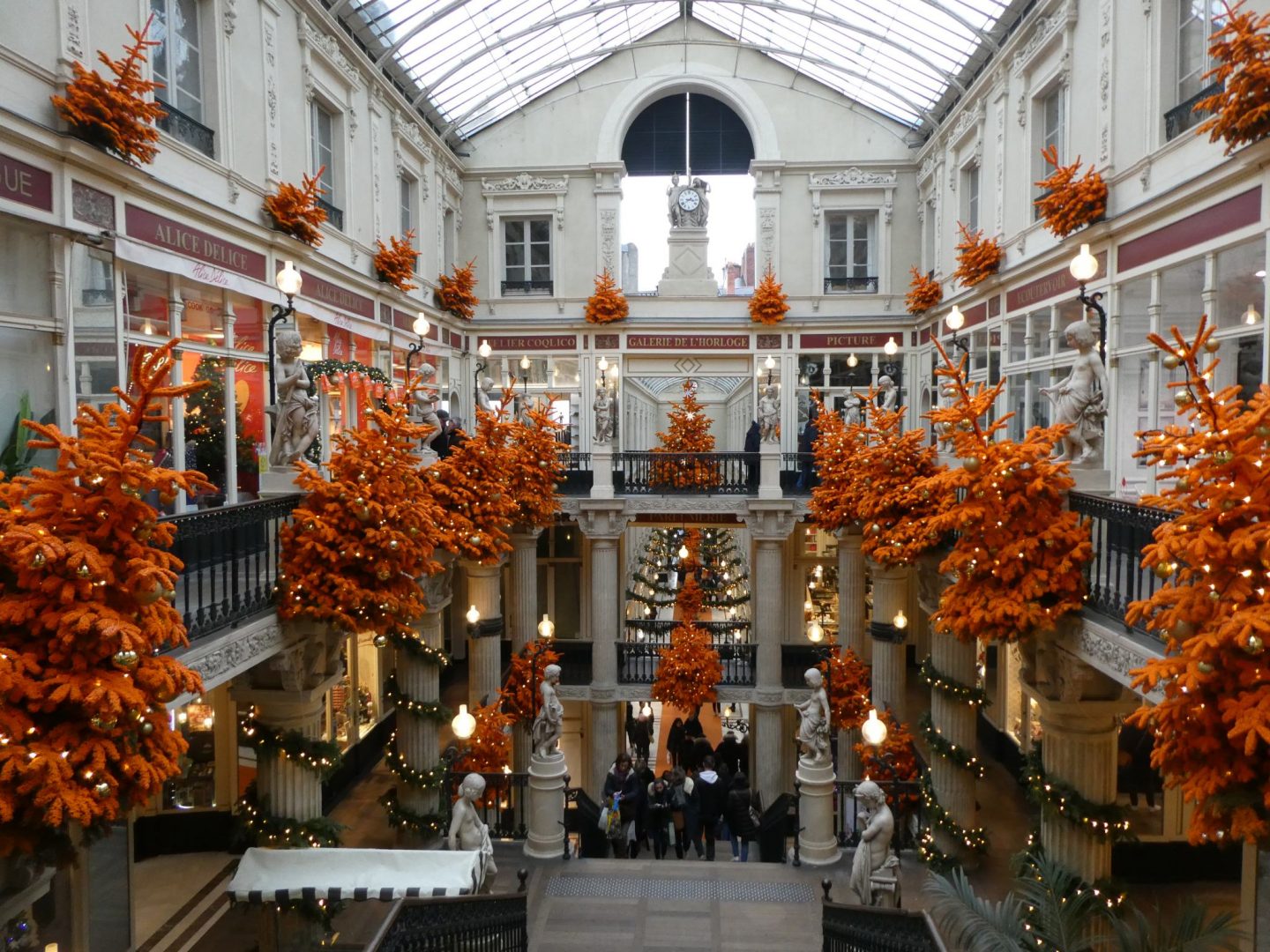 And full of quirky shops.  Raccoon fur swimwear, anyone? 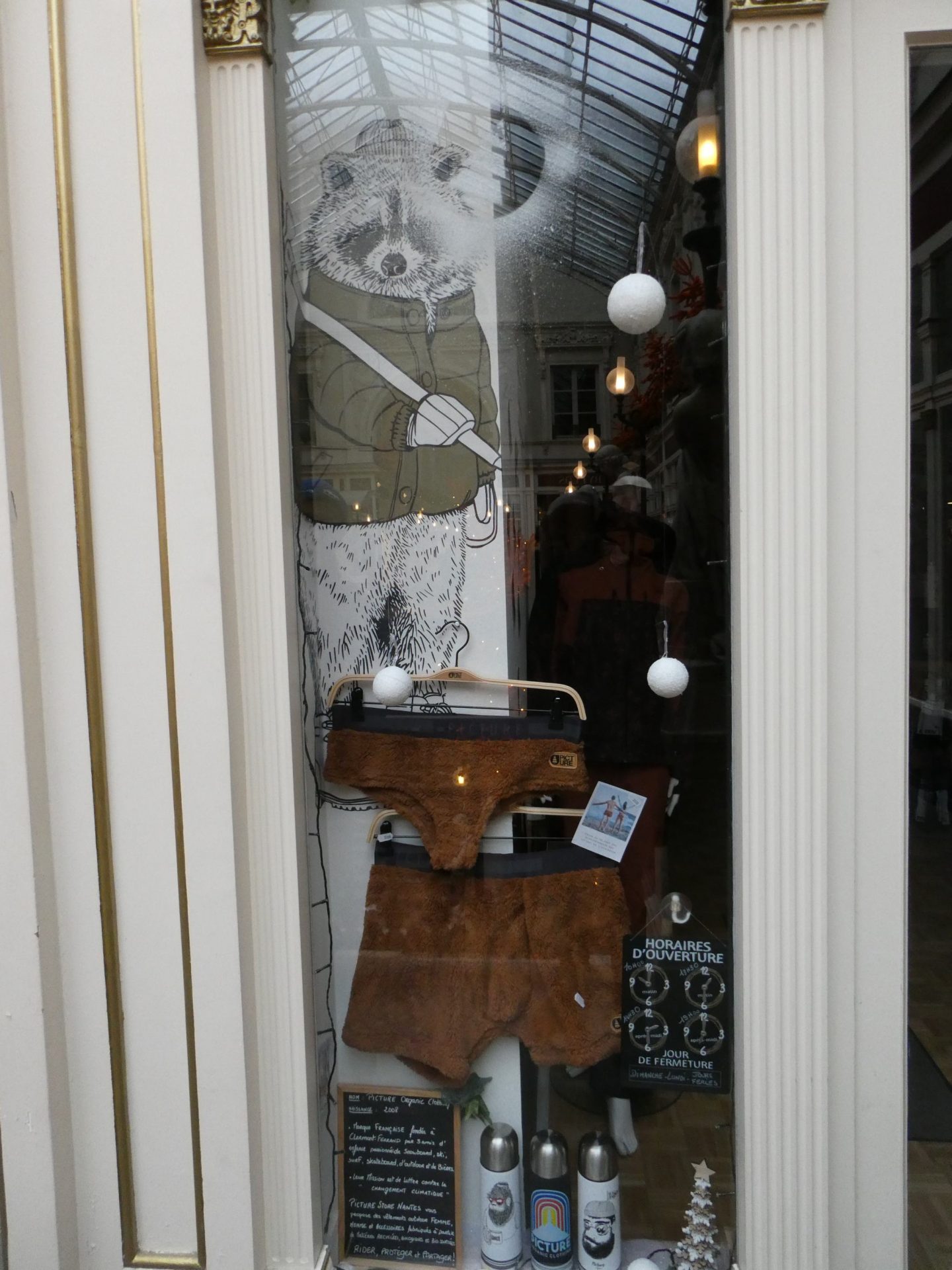 Shopping addicts couldn’t get any closer than staying in Micr’Home.  Perched five metres off the ground in the lane next to Passage Pommeraye, what may well be the world’s tiniest apartment is available for rent.  It is comprised of three 2 metre wide floors, a total of just 26 square metres including a living room/kitchen, bedroom and bathroom. 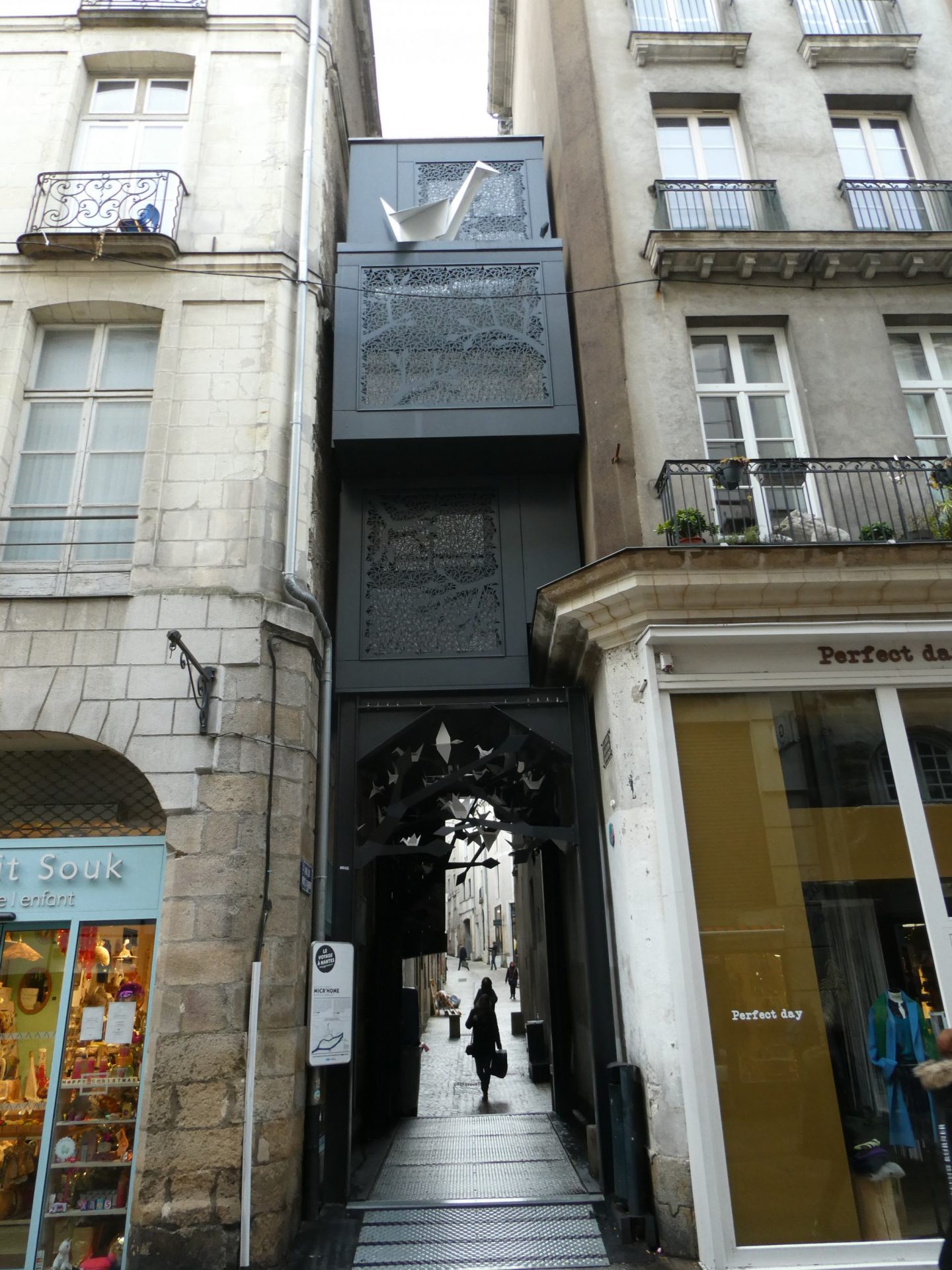 Nantes also has some really great restaurants and a swag of classic bistros.  How could you not be impressed with a city that’s got a restaurant dedicated to potato just a block from one specialising in pork?  Sounds like a collaboration waiting to happen.

Outdoor Christmas markets were in full swing.  France was in the World Cup final.  Bars were packed and there was a festive atmosphere, until they lost by one point in extra time.  Maybe next time.

Nantes was a fun city.  We came to see an elephant and discovered so much more.